Last week, Musa al-Gharbi of Columbia University and I participated in a webinar hosted by the Institute for Humane Studies where we focused on what our data for the 2020 College Free Speech Rankings can tell us about self-censorship and race on campus.

Our discussion focused on how our recent report provides evidence of a chilling effect on campuses among a notable portion of students, and that the prevalence of this chilling effect varied extensively across different groups of students and  issue areas. For instance, roughly two-thirds of black students say race is a difficult topic to have an open and honest conversation about on their campus, compared to less than half of Asians, Hispanics, and whites. On the other hand, almost half of Hispanic students say this about immigration, while less than 4 in 10 Asian, black, and white students say this.

This post answers some of the questions asked at the event that Musa and I were unable to respond to because of time constraints. Many of these questions hit on similar themes and topics, so many of them are grouped together and answered simultaneously.

How is student self-censorship impacted by different contexts? 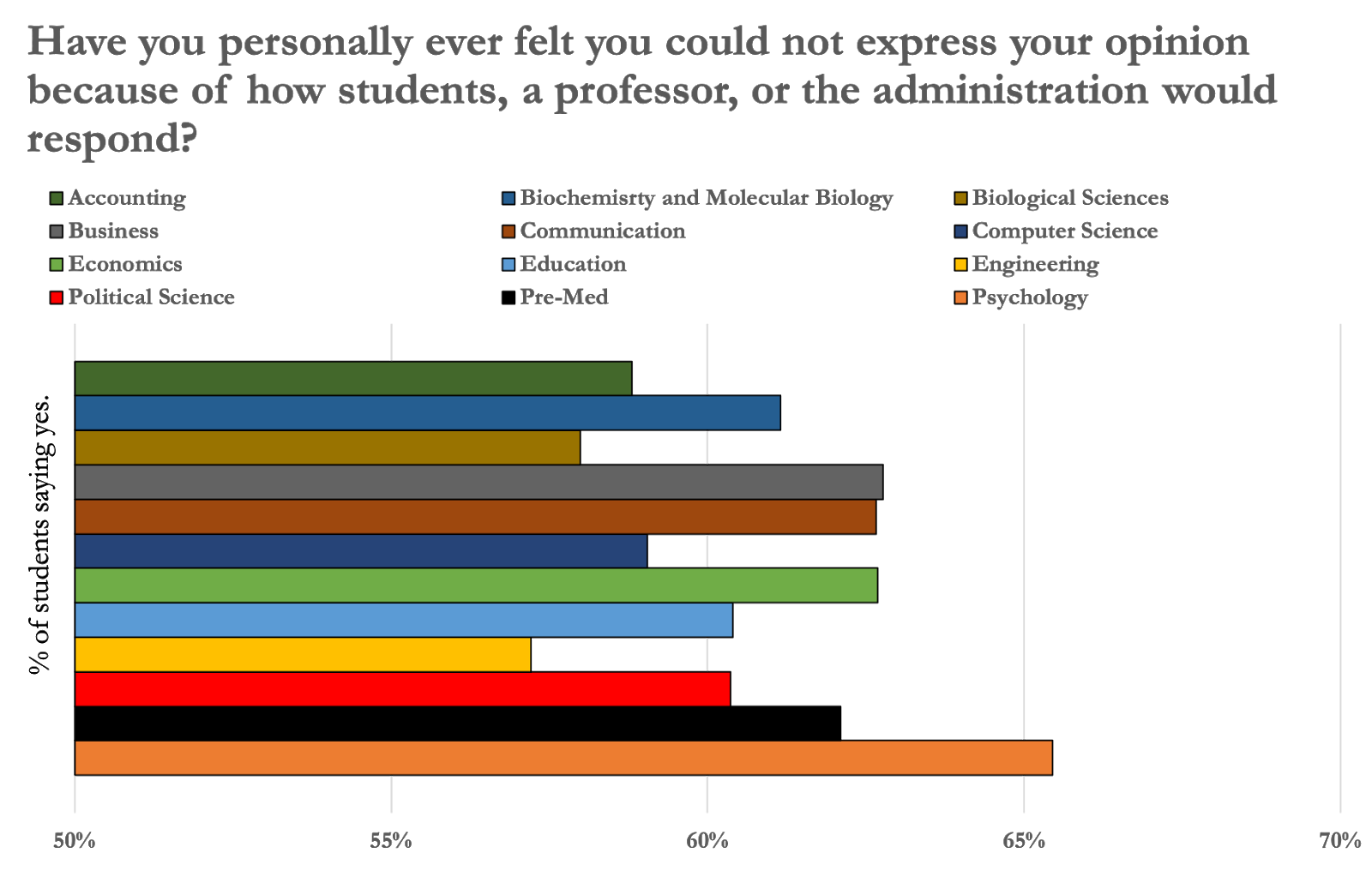 These findings suggest that self-censorship is not as big of a problem among engineering students.

Students were also asked how they feel expressing themselves online compared to in-person. We did not compare the responses of students enrolled in face-to-face classrooms to those of students enrolled in online courses. Consideration of how expression may differ online compared to in-person is certainly warranted. That the percentage of students saying they were uncomfortable expressing an unpopular opinion on a social media account linked to their name was greater than any of the other modalities asked about (disagree with a professor, express views to classmates, write a letter or op-ed critical of the administration) suggests that students are fairly concerned about expressing controversial views on social media. Additionally, the impact the Coronavirus pandemic has had, and continues to have, on higher education heightens the need for data that addresses this question.

What can administrators and faculty do to promote a more open expression climate on campus?

Previously, I noted that colleges can improve their College Free Speech Ranking by making it clear that the administration supports free expression and will not punish students or faculty for controversial and offensive speech or expression on campus. If the college’s speech policies do not have a “green light” rating from FIRE, then one way for the administration to make its stance on expression clear would be to revise those policies in an effort to obtain a green light rating and draw public attention to these efforts. This would signal that the college intends to follow the law, is committed to free expression, and intends to defend students and faculty when necessary.

However, a clear administrative stance in favor of free expression does not guarantee that a given campus possesses a strong culture of expression. The faculty also play a prominent, and possibly even more important, role in how students experience free expression on their campus. Students are likely to interact more with faculty members than administrators because of the time they spend together in the classroom. Faculty, therefore, have a very important role to play in creating a classroom environment that values free expression and then modeling such behavior in the classroom for their students.

Unfortunately, a perusal of the open-ended responses of students asked to provide an example of a time they self-censored on campus demonstrates that a notable portion of them are concerned that their grade would be negatively impacted if they expressed certain viewpoints, usually political ones, in the classroom. For instance:

I was in a class where the professor pretty much made you feel as if your your [sic] participation grade was at risk if you disagreed with them.

Whenever it is obvious that some of my professors are on the left, I felt like I couldn’t express my political opinions due to my grades.

The professors within my college tend to be conservative. I worry with certain professors that my opinion would cause them to unfairly grade my projects.

— Hispanic female at the University of Arizona

This concern is prominent among students even though the available empirical evidence indicates that professors do not punish students for expressing political views with which they disagree. A multitude of plausible explanations for the persistence of this belief exist. For instance, it is plausible that while some students incorrectly believe this about their professor(s), others may be accurate in their assessments. Adjudicating this possibility is however beyond the scope of a blog post.

Nevertheless, that students are concerned that some of their professors may dock their grades for holding opposing political views suggests that faculty can do more to instill an open and inclusive expression environment in the classroom. One fairly common suggestion made by students in their open-ended responses was for their professors to leave their own personal politics out of the classroom, even when discussing controversial political issues.

How can we encourage students to rely more on empirical evidence instead of their feelings?

Finally, a number of questions focused on a tension between feelings, or emotional reasoning, with logical inference and deduction. Faculty expressed concern over how difficult it seems for students to explore the complexities of the many problems facing society and that a number of their students place a “supreme importance” on their own feelings even when what they “feel” is right is contradicted by empirical evidence. Some students also feel this way and report that this kind of environment limits their ability to freely express themselves in the classroom and on campus in general:

I often like to let people share their ideas so I can understand them better. But I will almost never engage in a debate or respond to them. In many classes, especially discussions with groupthink, many students whether in a high-level university, or from a local community college, tend to share their thoughts as a speech rather than a signal of discourse. I rarely speak on controversial topics because blunt facts and truthful causality is apparently disrespectful and insensitive because I risk hurting their feelings. I dislike how closed minded and how closely this generation of thinkers relate their thoughts and their ego.

— Asian male at the University of Michigan

Just in general. You have to be very careful of your words in order to avoid hurting anyone’s feelings. Sometimes it is very hard to debate on topics because of this.

Nearly everyday I feel like I cannot express my opinion without hurting someone’s feelings.

Setting aside my observation that this problem does not seem unique to college students, I do not think there is a single magic bullet solution that will solve this problem. Thus, I would advocate an approach that is akin to relying on a whole toolkit instead of only a hammer, and  suggest that faculty and administrators who possess this concern consult any or all of the following:

The issue of student self-censorship is a prominent one on campus, and it is clear that administrators and faculty are in need of ways to promote a more open expression climate. The problem, however, is multifaceted as students self-censor for different reasons and are likely to respond differently to various efforts to reduce this self-censorship. This problem may become more prominent, and thus challenging, as campuses continue to diversify their student bodies, and therefore cannot go unaddressed any longer.