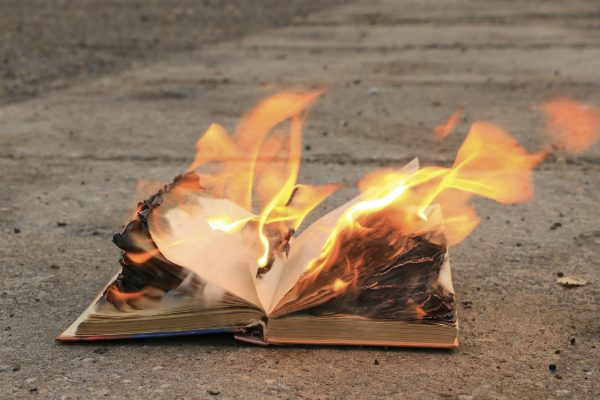 A book burning on the campus of Georgia Southern University last week had the potential to ignite more than just the pages of the book in question. Controversy, censorship, and heightened campus tensions can result from such demonstrations. But a timely, speech-friendly assessment from Georgia Southern’s president — coupled with robust student media coverage and a responsive student government — shows how an explicit commitment to freedom of expression can help a community respond to controversy.

Last week, Latina author Jennine Capó Crucet faced criticism at a Q&A session at Georgia Southern over her novel, “Make Your Home Among Strangers.” Students accused the author of “dissing white people” and making “generalizations about the majority of white people being privileged.” The book, required reading in some of the university’s first-year classes, explores the challenges of a Hispanic college student in a predominantly white environment.

Following the lecture, several students burned copies of the book on a grill while another tweeted an image of a ripped-up copy of the book. Their actions sparked a firestorm of criticism online and in the media.

so after our FYE book’s author came to my school to talk about it… these people decide to burn her book because “it’s bad and that race is bad to talk about”. white people need to realize that they are the problem and that their privilege is toxic. author is a woman of color. pic.twitter.com/HiX4lGT7Ci

From what we have been able to determine, the night’s events were another example of freedom of expression and a continuing debate of differing ideas, which are tenets of our ongoing efforts to align with our values and initiatives encompassing inclusive excellence. Specific to the reported events of that evening, while it’s within the students’ First Amendment rights, book burning does not align with Georgia Southern’s values nor does it encourage the civil discourse and debate of ideas.

That’s exactly the kind of leadership FIRE President and CEO Greg Lukianoff encourages college presidents to take when campus controversies start brewing. Greg outlined five simple ways college presidents can prove their commitment to free speech. One of the recommended steps is to defend student and faculty speech rights loudly, clearly, and early. The sooner punishment is taken off of the table as an option, the sooner institutional resources can be devoted to viable, effective ways to address the issue.

“I can’t tell you how much of a difference it makes when a university president speaks out when there is a controversy about professor or student speech — and says in no uncertain terms that the person’s speech is, and should be, protected at that college,” Greg said. “Time and time again, I’ve seen this show of leadership stop embarrassing free speech controversies before they snowball.”

If Marrero’s statement at Georgia Southern didn’t extinguish the flames, they certainly smothered some of the embers, allowing students to speak their minds about what had happened and how to move forward.

The student government quickly organized a forum with Marrero for students to express their thoughts on the book burning and Georgia Southern’s response. The student government president advocated for “continuing the conversation” at future meetings, telling students that “[o]pening the door to organic conversation is essential to learning and appreciating our differences.” The history department opened a door of their own by hosting a lecture on the history of book burning. The department of writing and linguistics weighed in with their disappointment about book burning and calling for students “to remain civil in disagreement, even on difficult issues.” Each of these are examples of the “more speech” approach that FIRE encourages.

All the while, student-run newspaper, The George-Anne, offered robust coverage of the controversy while providing a sounding board for students and other community members to weigh in.

All the ingredients were in place to allow civil discourse to take place at Georgia Southern: a student newspaper staffed with dedicated student journalists, faculty members empowered to give historical context to the event, and forums established for students to voice their frustrations. That’s exactly what is supposed to happen on a college campus.

The only misstep may have been the cancellation of a subsequent event — and a subsequent chance for angry tweets and book burning to give way to debate and dialogue. Crucet announced on Twitter that the event was canceled “because the administration said they could not guarantee my safety or the safety of its students on campus because of open carry laws.” However, a spokesperson for Georgia Southern said Crucet’s representative canceled the event, according to The Washington Post. Either way, universities have an obligation to protect speech — both from censorship and potential violence. As FIRE has written before:

Police officers’ most basic obligation is to protect the public from harm — even when expressing unpopular opinions. Failure to do so not only threatens the safety of individual community members but will inevitably lead to a chilling of speech on campus.

[T]here is a history at this institution, these kinds of incidents that are at many state universities throughout the United States. We aren’t immune at this institution, and unfortunately have a history, one we have to own, admit and continue to work for to strive, correct and improve. We can’t not look back and know that history. I can’t guarantee it won’t happen again, but what I can guarantee is that we are striving to improve and to make your environment better here every day.

“In essence,” Marrero said, “the First Amendment overrides [the] Student Code of Conduct. And so that is frustrating.”

He’s right. The First Amendment can be frustrating. It can be frustrating to hear views we find distasteful, offensive, or outright wrong. But that’s part of the deal. We don’t get to unilaterally decide when someone else’s speech is so distasteful, offensive, or wrong that it loses constitutional protection. And in turn, no one gets to unilaterally make that decision about our own speech.

FIRE encourages other schools facing possible controversies to follow a similar path. By speaking out loudly, clearly, and early, Marrero may have avoided a larger controversy.

“Some of you would like to see more formal action taken on the students in the video and I can empathize — I can sympathize with your frustration and even your anger,” Marrero told The George-Anne. “My job is to protect the rights of all students.”

FIRE applauds Marrero for doing just that. We appreciate the Georgia Southern community’s vocal and fiery debate on a difficult subject, and FIRE will continue to monitor the situation to ensure voices on all sides of this contentious issue are heard.