Yesterday, FIRE’s Ari Cohn discussed the controversy at Harvard Law School (HLS), where “Reclaim Harvard Law,” a group of students who have been occupying a lounge in the HLS Caspersen Student Center since mid-February (they have renamed the room “Belinda Hall”), tore down signs posted by third-year law student Bill Barlow. Sixty-eight of Barlow’s signs, some of which compared the “Reclaim Harvard Law” campaign to that of presidential candidate Donald Trump (as Barlow perceives both as having a cynical perspective on freedom of speech), have been torn down by students.

After Ari’s report yesterday, a video emerged of the posters being removed:

Today, both HLS and Reclaim Harvard Law responded to the controversy—and Barlow had an opportunity to try posting in the space again, with this result:

Barlow tells FIRE that HLS Dean of Students Marcia Sells was present and that when Barlow spoke to her about today’s events, she told him, “Well, the signs are still up, aren’t they?” A spokesperson for Harvard Law School would not confirm the accuracy of the quote, but said that “Dean Sells has made it clear to students in the lounge that the wall space there is to be shared by all on equal terms, and that students should not remove or move the posters of other students.”

In an email today to the HLS community, HLS Dean Martha Minow reaffirmed “that in shared spaces, all students must be able to voice their opinions and express their dissent equally.” Dean Minow also noted that HLS “guarantees these rights of free exchange” and that interference with these rights—including the defacing of signs—is a “serious violation of personal rights” prohibited by HLS’ Protest and Dissent Guidelines.

1. The Law School will shortly provide a centrally located space for students to post their opinions, express their dissent, voice their protest, and exchange views. We will establish guidelines, moreover, to ensure that all students have access to this forum.

2. The Law School will take steps to ensure that students and student organizations have ample opportunities to use space to engage in study, discussion, teach-ins, and other forms of collective speech and action.

In the interim, we will continue to make the WCC lounge available as a temporary space for the community to engage in speech. But that space must be available to all who wish to use it for such expression.

These are, broadly, positive steps, and FIRE is encouraged by HLS’s statement in support of its students’ rights to express dissenting and controversial views. (That is, as long as the centrally located space referenced above provides an additional space for campus speech, in addition to all the other forums already available for free expression on Harvard’s campus. FIRE would hate to see Harvard accidentally quarantine expression to a “free speech zone.”)

Reclaim Harvard Law also responded to the criticism in a public statement, arguing that the their use of the space preceded Barlow’s right to post his materials:

[W]e have been modeling our own Office of Diversity and Inclusion, one small space in the law school for marginalized students inspired by the school’s total failure to create any such space. In the past few days, a person who has been outspokenly opposed to our fight for racial justice from the beginning has been putting up deliberately provocative posters in our space. After extensive debate, we determined that, while all are welcome to engage with us, and we have repeatedly invited this particular individual to do so, a model of an Office of Diversity and Inclusion would certainly put up posters and information about its mission and values, but would retain control over its own decorating policy to maintain a space that reflects its values. We do not believe that free speech is implicated here (we are a group choosing what to post in its own space, without any institutional, let alone governmental, support, and there are countless other – white – spaces on the campus in which this individual can express his views, and has). However, notably, the idea that we have prevented this particular white man from putting up offensive posters in this particular space has created attention and outrage that our own claims to suppressed speech and silencing have not. This is not the first time that supposedly neutral principles of free speech have been invoked to protect white privilege – our fight is to make it the last. We have been told that the way to fight speech is with more speech. It should be obvious to everyone that this is not a level playing field, but nevertheless we are taking this advice, and will expand our campaign to spread the voices of the marginalized and the silenced throughout Harvard Law School. We wish Harvard Law School would be on the side of the oppressed and the marginalized, but can hope for no more than that it will maintain its studied neutrality.  #MoreSpeech 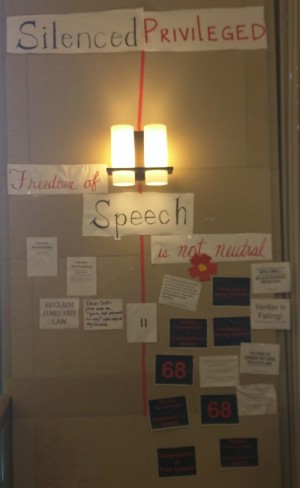 After these statements from HLS and Reclaim Harvard Law, Bill Barlow—the HLS student whose posters had been torn down—again tried to post. When he arrived at Caspersen Student Center, he discovered that students had drawn a line down a wall, labeling one side “Silenced” and the other side “Privileged.”  Across the top were the words “Freedom of Speech is not neutral.” Various signs had been moved to the “privileged” side of the wall, as you can see in the photo here.

FIRE hopes that all involved will keep to their commitments to support the free speech rights of all members of the HLS community, including both Reclaim and students who disagree with Reclaim.

Vandalizing a sign out of disagreement isn’t the exercise of free speech, and scribbling the words “stop censorship” over another’s message is perverse irony.