Illinois College, a private liberal arts school north of St. Louis, banned the pseudoanonymous social media application Yik Yak from its wireless Internet network last month. Since then, Yik Yak is being used to criticize the administrators who banned it.

The Yik Yak kerfuffle at Illinois College began when, as the Jacksonville Journal-Courier notes, the student government asked administrators to ban access to the app, after “Black Student Union and college faculty members also voiced concerns”:

The Journal-Courier quotes an email sent by Illinois College President Barbara Farley to the student body discussing the decision on March 14 to formally ban the application from college wifi. Farley said the college supports freedom of expression, but that “anonymous posts … do not encourage an educational exchange.”

Illinois College publicly assures students that “[f]reedom of expression is a fundamental right in a democratic society, a right that Illinois College strives to ensure,” but banning websites or applications based on the assumption that offensive content might be found there is plainly inconsistent with this commitment.

Nor is the reasoning that a particular app should be banned because it has been used to post offensive content a rationale that couldn’t equally extend to other social media platforms, including Twitter, Facebook, and Snapchat.

“The students came to the administration with these concerns. The administration, under President Farley’s leadership, determined we were utilizing a college network to support this social media. We followed suit with Grinnel [sic] College and Augustana College, who determined they wouldn’t support social media on their networks. So this is no longer available via our Illinois College wi-fi.”

Perhaps Chipman spoke too broadly. While Grinnell College and Augustana College have banned Yik Yak, there have not been any reports that they’ve banned “social media” in general. But, there’s little reason why the rationale for banning Yik Yak couldn’t just as well apply to social media in general.

Illinois College did not respond to an email asking, among other things, whether it had also banned Twitter, Facebook, and Snapchat.

As FIRE has discussed before, banning media platforms because they permit anonymous speech is a hamfisted approach, discouraging productive uses of anonymous speech. Moreover, it’s futile: to access Yik Yak from campus, students need only connect to their cellular network.

And that’s exactly what’s happened at Illinois College. As The Chronicle of Higher Education reports, Yik Yak is now being used to mock Illinois College’s ban—and its administrators: 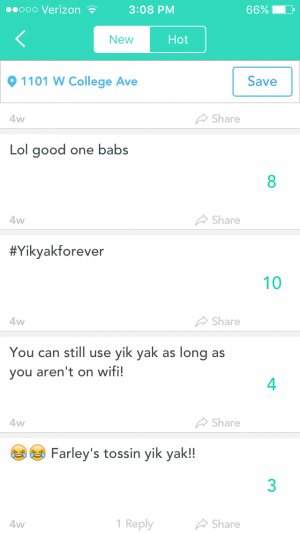 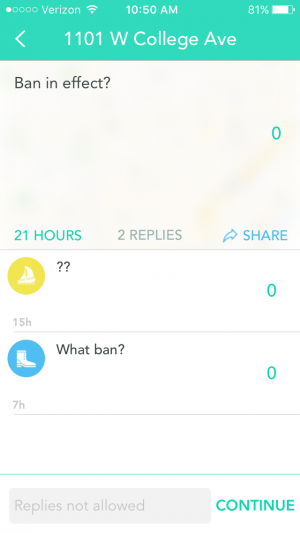 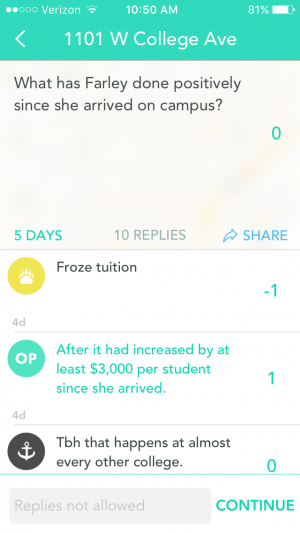 Perhaps she should disconnect from Illinois College’s wifi and check out Yik Yak.