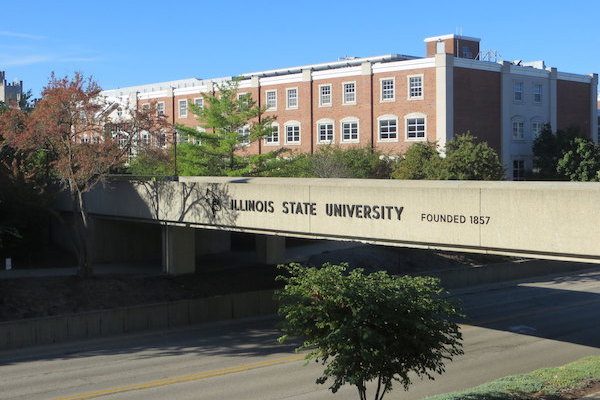 Illinois State University found itself in the middle of a social media firestorm this week when images of an unusual quiz question from an introductory psychology course were posted online.

In the now-viral Twitter thread, a relative of an Illinois State student posted an image of the multiple choice quiz question at Illinois State, which asked: “Which of the following examples best fits with the cultural traditions of the Native American Church?” The four multiple-choice possible answers were as follows:

Over the next two days, the original poster and others on Twitter tagged and demanded responses from both Illinois State and the publishing company Pearson, the latter of which both published the textbook on which the quiz question is based and hosted the website for the quiz itself.

Illinois State and Pearson were both quick to respond. Less than two hours after the initial post, Illinois State said that it would “bring this to the attention of our university leaders.”

(While the subject matter is outside my or FIRE’s expertise, according to the original Twitter poster, the correct answer was supposed to be the choice involving marijuana. From the perspective of constitutional law, however, the Native American Church is itself noteworthy. One of its adherents, Alfred Leo Smith, was the lead plaintiff in the landmark case of Employment Division v. Smith (1990). Smith, who was fired from his job for ingesting peyote as part of the church’s sacramental use of the drug, lost, but the decision sparked the passage of the federal Religious Freedom Restoration Act, along with many state counterparts.)

After the thread went viral, Pearson responded by initially asking for more information so it could “properly review and address the concern.” By the end of the day, the company had announced that it was “taking action to remove it.”

The responses from Pearson and Illinois State are troubling, reflecting twin threats to academic freedom: public universities focused on public relations first and academic freedom second, and internet companies that are willing to profit from academic communities but unwilling to shoulder the inherent risk attendant with academic freedom. Namely, that someone will be angered by course content or questions.

This content does not represent our commitment to creating fair representations of all people in our materials. We’re taking action to remove it.

Most obviously, Illinois State has an obligation to ensure that faculty are protected by the university’s commitment to academic freedom in both their research and teaching. According to Illinois State’s own policies and procedures, academic freedom means that faculty are free “to discuss all relevant matters in the classroom,” and that this “applies to all members of the campus community who teach higher education courses.”

It’s possible that this quiz question and its associated answer choices are not relevant to the class, are incorrect, or simply represent bad pedagogy. If so, that is properly a matter for the faculty to determine using the ordinary academic procedures that every university has in place. But that’s not what Illinois State chose to say. Instead, in the name of taking “[its] commitment to diversity and inclusion seriously,” it flatly states that “[t]he sentiments of that message are completely inconsistent with Illinois State’s core values,” and asked the students to fill out a “public incident report” (among the choices of type of incident is “Bias Incident”).

But faculty do not, and must not, have an obligation to make all their questions and answers (or their “sentiments,” whatever that means) appear to conform to the university’s “core values” — and this is particularly obvious when the entirety of the context presented is a screenshot of one quiz question. From the tweet, we don’t know what might have preceded the question or why the question was being asked. Even if this turned out to be irrelevant, it’s easy to imagine perfectly legitimate questions on a variety of topics from politics to history to medicine presenting questions and/or answers that some will find offensive. It’s certainly possible to imagine a quiz question that would be unjustifiable under any standard, but this simply doesn’t rise to that level.

(2/2) We ask that you fill out the Public Incident Report form (https://t.co/fkpDtfXJuE?) which will enable us to bring the matter to the appropriate university leadership as quickly as possible. Thank you.

Nor does the elementary question of whether the “correct” answer was, in fact, actually correct appear to have entered into Illinois State’s response (or that of many of the Twitter users angered over the question). The first result in my Google search for the terms “native american church marijuana” turned up an article about the Native American Church of Hawaii, of which the first sentence is “The Supreme Court has declined to hear the case of a Hawaii church that claims using marijuana is a part of their religion and therefore should be exempt from federal marijuana laws.” Again, that’s not to say the quiz question or answer are correct or relevant. But it does suggest that 30 seconds of internet research on the part of Illinois State before it condemned the question might have clued the university into the fact that this might be better handled as an academic matter rather than a political one.

Even with all this, it’s the response from Pearson, the publishing company, that might actually present the greater threat to academic freedom. What exactly did Pearson mean when it said it would “properly review and address the concern,” a process that evidently can be performed in its entirety in less than 14 hours? The quiz seemed to accompany a textbook Pearson publishes, but it’s not clear yet whether the textbook authors, someone at Pearson, or the unnamed professor at Illinois State wrote the question at issue. Presumably, if Pearson published the quiz question, it has the right to remove it, though at the reputational cost of sending the message that political action is a great way to dictate the content of its college textbooks.

That’s bad, but it would be worse still if Pearson removed a question written by the Illinois State professor who taught the course — and this may in fact be the case. Pearson provides numerous textbook and eLearning services for universities, and in doing so has made numerous promises to respect the academic freedom rights of faculty and students. In its FAQ sheet for deans and administrators, Pearson asks a hypothetical question: “Can faculty members design their own course, select their own textbooks, and maintain academic freedom?” Pearson’s answer, with emphasis added:

Yes. The institution and its appointed representatives are responsible for the academic integrity of the program. Your regional and professional accrediting bodies determine the academic standards of all programs, including online programs. Faculty are responsible for creating the course curriculum, selecting materials, designing learning activities, and assessing student learning.

But if Pearson is willing to remove quiz questions written by independent faculty members who simply administered their classes on Pearson’s platform, it has broken this promise. That’s not just a contractual problem for Pearson; it’s also a constitutional problem for Illinois State and any other public university that uses its platform. State universities that contract with private companies to provide educational services for students cannot empower those companies to violate rights that the state actors themselves must respect. Courts have rightly refused to allow this kind of blatant “end run” around the Constitution.

But companies — like Pearson — that profit by providing support to the academic enterprise must be committed to the full panoply of expressive rights that underlie academia.

A private company is free to determine what it will or will not publish, whether that decision is wise or unwise. But companies — like Pearson — that profit by providing support to the academic enterprise must be committed to the full panoply of expressive rights that underlie academia. If they interpose their own judgment about what questions are appropriate or not, they usurp the role of faculty members. Yet the migration to online teaching and discussion as a result of the pandemic has seen at least one private company — Zoom — censor speech otherwise supported by universities. If Pearson is unwilling to accept the risk that faculty may ask questions that Pearson or others find inappropriate, it should not be in the business of serving academia.

But who will come to the defense of faculty members’ academic freedom and ensure that companies like Pearson are committed to the promises they’ve made? Illinois State? We won’t hold our breath.