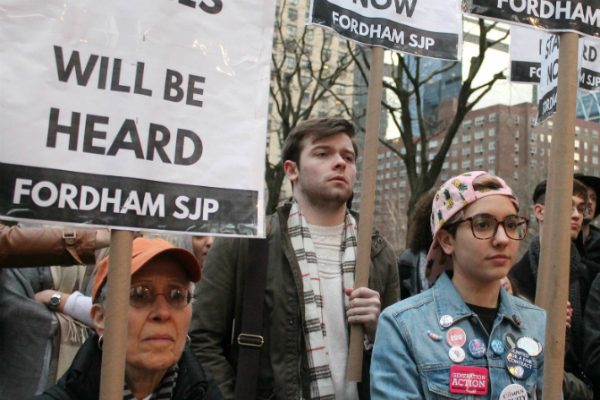 Since December 2016, Fordham University has refused to grant official recognition to a chapter of Students for Justice in Palestine (“SJP”) based on the group’s political views. That may come to an end soon, however, as a New York court this week ordered Fordham to recognize the student organization.

The SJP students filed their lawsuit against the school back in April 2017, after the dean of students overturned the student government’s decision to approve SJP for recognition late the previous year. In his decision, the dean cited the group’s support for the Boycott, Divestment, and Sanctions movement and asserted that “the purpose of the organization” would lead to “polarization” of the campus community. That decision landed Fordham on FIRE’s 2017 list of America’s 10 worst schools for free speech.

After several years in court and a packed hearing in January 2018 — during which Fordham gave shifting justifications for refusing SJP recognition — Judge Nancy M. Bannon of the state trial court denied the school’s motion to dismiss the suit and granted SJP’s petition to overrule the dean and uphold the student government’s decision.

At a public university, the rejection of SJP on this basis would be an obvious First Amendment violation, as well-worn jurisprudence prevents a university from denying recognition to student groups because it disfavors their message or mission. Fordham is a private institution and therefore not bound by the First Amendment. However, it makes multiple public promises that its students enjoy freedom of expression, proclaiming that the “expression of controversial ideas and differing views is a vital part of University discourse.”

And those promises count. Under New York law, even a private university must adhere to its public commitments to its students. As was the case in SJP’s suit, aggrieved students may challenge a decision by their private institution on grounds that it was “arbitrary or capricious” or deviated from the school’s written policies.

Although this standard can be fairly deferential to institutions, Judge Bannon made clear that a university may not throw out its own rulebook to prevent a student group from expressing political views it finds controversial. The court noted that Fordham failed to abide by its published rules governing student club recognition, thereby imposing an extra layer of scrutiny and allowing the dean to veto the student government’s decision even though the rules made student government the last stop in the process. Moreover, although the rules allowed the dean some discretion in evaluating a club’s application, the court emphasized that “this discretion is neither unlimited nor unfettered.” As Judge Bannon wrote:

The issue of whether a club’s political message may be polarizing is not enumerated or identified as a relevant factor in any governing or operating rules, regulations, or guidelines issued by Fordham, and appears to have been arbitrarily considered by Dean Eldredge after input from others who are critical of SJP’s political beliefs. Importantly, consideration of whether a group’s message may be polarizing is contrary to the notion that universities should be centers of discussion of contested issues.

Judge Bannon concluded that the dean’s decision to deny SJP’s recognition based on disfavored political views was “arbitrary and capricious” in light of the record and Fordham’s policies.

FIRE has long argued that private institutions like Fordham — although not bound by the First Amendment — have a moral and legal duty to live up to the promises they make to their students and community to uphold free inquiry, expressive and associational rights, and academic freedom. We’re gratified to see Fordham held to its commitments in no uncertain terms by the New York state court. We’ll keep readers updated if the university appeals the ruling.