A survey released last week by the Pew Research Center found a majority of Americans think higher education is headed in the wrong direction and show sharp partisan disagreement about the reasons why. But the survey found widespread agreement on one issue: the need for free speech on campus.

“When asked about the trade-off between allowing free speech, however distasteful, on college campuses versus protecting students from views they may find offensive,” Pew reports, “the public comes down clearly on the side of free speech.” 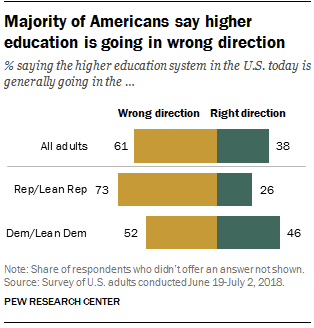 This sole point of agreement is in stark contrast to the rest of the survey’s findings, which show that a majority of Americans (61 percent) think higher education is going in the “wrong direction,” and that Republicans and Democrats are “worlds apart” on the reasons why.

According to Pew, 79 percent of Republicans with this view cited “professors bringing their political and social views into the classroom” as a major reason for their displeasure, and 75 percent of those Republicans said there was “too much concern about protecting students from views they might find offensive.” Small percentages of Democrats, conversely, found these to be problematic and instead cited issues such as high tuition costs.

The Pew report was part of a larger annual study of Americans’ views toward a variety of national institutions such as churches, banks, and the media. Notably, the study also finds a sudden sharp decline in some Americans’ view of higher education.

With so much division over the direction of higher education, data showing high support for free speech is encouraging. In its nearly 20 years fighting for civil liberties on the nations’ college and university campuses, FIRE has seen the power of free, open, and rigorous debate in bridging divides on these kinds of contentious issues. Free speech brings people of all backgrounds together and helps universities fulfill their core mission as truth-seeking institutions. It follows, then, that institutions of higher education should be at the forefront of asking questions about their own strengths and weaknesses, and taking an active role in opening that question up for debate.