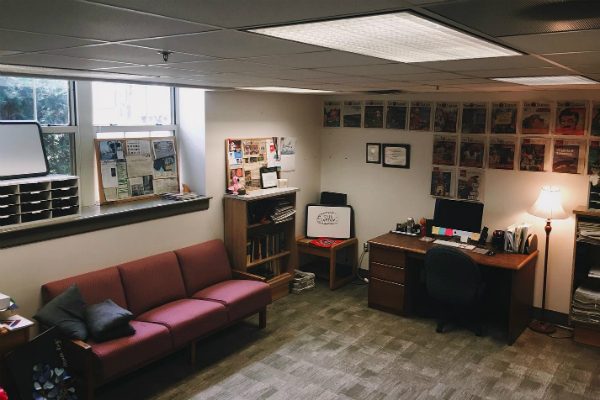 Are more student newspapers going missing again after a two-decade downturn? It sure seems that way.

A bizarre cover-up at Radford University in Virginia, in which university administrators appear to be actively concealing the identity of a Radford employee caught emptying campus newspaper racks — as well as numerous other recent cases of newspaper theft nationwide — is bringing renewed attention to the crime of stealing student newspapers.

Last month, FIRE reported on the approximately 1,000 copies of The Tartan, Radford’s student newspaper, that went missing in mid-September.

The Tartan’s cover story, about a recently deceased Radford professor named Steve Tibbetts, included a photo of the Tibbetts family standing in front of a street sign bearing the Tibbetts’ name. The signage also happened to indicate the street was a “Dead End.”

An open records request reveals administrators lamented the “insensitivity” of The Tartan’s photo choice via email just before the papers went missing.

Ironically, it’s highly unlikely Tibbetts’ family was offended in any way — given that Tibbetts’ widow provided the photo to The Tartan to use.

But it’s Radford’s continued efforts to conceal the identity of the employee seen on surveillance footage stealing papers from several racks that has garnered nationwide attention — including a critical weigh-in from the Editorial Board of The Washington Post.

Radford has repeatedly refused to release the perpetrator’s identity, calling the matter a confidential “personnel issue.”

“The university’s strategy, if you can call it that,” The Washington Post wrote, “is tailor-made to prolong Radford’s embarrassment, calling into question its leadership’s judgment.”

Tartan editor Dylan Lepore told FIRE the paper is girding for a fight, and awaiting a response to its open records request for more information on the employee’s identity.

“Me, as the editor-in-chief, I’m not going to let this go, or back down from it, or leave this case unsolved.”

Lepore said he independently consulted FIRE’s Spotlight Database to confirm that Radford indeed promises its students and student press freedom of speech. Radford is also a public university, so it is constitutionally obligated to uphold the First Amendment protections of freedom of speech and the press.

In addition to resources from FIRE and offers of legal help, Lepore said he’s also gotten support from a wide swath of the Radford community, including students, faculty, and alumni.

“I’ve gotten phone calls [and emails] from professors I had a few years back that are just like, ‘We’re with you all the way. We’re still looking into this. Keep us updated.’ And they keep bringing this up in their faculty senate [meetings],” Lepore said. “I’ve got the English department, the math department, and the communications department all on my side.”

“But I haven’t heard anything from the administration.”

Lepore also said The Tartan will continue to report on the cover-up even though some Tartan staffers have expressed fresh fear about going up against the school.

“Some have concerns,” Lepore said, adding that some of his writers aren’t journalism majors and may not know their rights as reporters. “I’m trying to educate them on how it works. I’m like, ‘Guys, The Tartan is 100% fine. We didn’t steal the newspapers.’”

“Even my mom asked me, ‘Can the school kick you out of the university?’,” Lepore said with a laugh. “I was like, ‘If the school kicks me out, then we have a case on our hands.’”

Despite no prosecution, stealing ‘free’ papers is illegal

Complicating matters in the Radford case is that local authorities declined to prosecute the employee because, unlike some states, Virginia has no state or local law specifically banning the theft of “free” newspapers, and the Virginia Attorney General’s office apparently shares the misguided belief that free papers can’t be stolen.

If you take a bucket of Halloween candy, or a pallet of toasters that a bank was going to give away with a new account, or a carton of ketchup packets from a fast food restaurant, it isn’t a defense that the owner was going to give them away anyway. They were giving them away because they got a benefit in giving them out in small numbers to many people. Taking them all at once deprives the owner of that benefit.

FIRE and the Student Press Law Center have each covered theft of student publications since the early 2000s. The SPLC’s Newspaper Theft Resources page shows an overall decline in newspaper thefts between 2000 and last year; however, the recent rash of reporting on the crime suggests an uptick may show up in the SPLC’s next update.

Here are the student newspaper thefts FIRE has tracked in 2019:

If you find newspapers stolen on your campus, are a student journalist being asked to submit stories to administrators for prior review, or are otherwise being silenced, submit a case to FIRE.