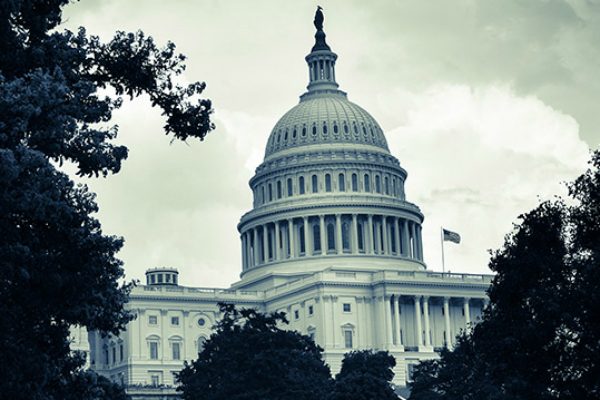 Last month, in an attempt to ensure that institutions of higher education are adequately protecting students from unlawful acts of anti-Semitism, lawmakers reintroduced the Anti-Semitism Awareness Act in Congress. However well-intentioned the legislation may be, it remains deeply flawed and a threat to the First Amendment.

The bill, similar to prior versions we have repeatedly criticized, will chill speech related to the Israel-Palestine conflict by requiring the Department of Education to use a specific definition of anti-Semitism when “reviewing, investigating, or deciding whether there has been a violation of title VI of the Civil Rights Act of 1964” as it assesses “whether the practice was motivated by anti-Semitic intent.”

There are significant problems with this approach. The first problem, which so many have pointed out, is that the definition of anti-Semitism in the bill is vague and overbroad. It reads:

The definition targets “a certain perception of Jews, which may be expressed as hatred toward Jews” — a description so broad that it allows for the investigation and punishment of core political speech, such as criticism of Israeli policy.

Even the definition’s primary author, Ken Stern, opposes the Anti-Semitism Awareness Act because of the likelihood that it will chill student speech. Writing for  The New York Times, Stern reminded legislators and the public that the definition “was intended for data collectors writing reports about anti-Semitism in Europe. It was never supposed to curtail speech on campus.”

The chilling effect will be exacerbated by the fact that the definition explicitly incorporates “contemporary examples of antisemitism in public life,” most of which are protected under the First Amendment. Two egregious examples on the list include “[a]pplying double standards by requiring of [Israel] a behavior not expected or demanded of any other democratic nation,” and “[d]rawing comparisons of contemporary Israeli policy to that of the Nazis.”

To be clear, speech does not lose its protection because it may involve “double standards.” Moreover, if one may constitutionally compare any other country’s policies to Nazi policies, similar criticisms of Israel are equally protected. (Spoiler alert: it is 100% constitutional to compare any country’s policies to those of Nazi Germany, and the First Amendment’s protection is not contingent upon whether the comparison is or is not persuasive.)

The second problem with the bill’s approach to addressing anti-Semitism on campus is that it opens up a dangerous Pandora’s box that would fundamentally politicize anti-discrimination law. Federal law prohibits discrimination. It does so on the basis of a list of protected classes including race, national origin, ethnicity, gender, disability, and religion, just to name a few. We rely on courts to analyze cases in their individual contexts to determine whether conduct amounts to unlawful discrimination along any of those lines. Our laws do not prohibit or try to define terms like racism, sexism, anti-Semitism, or Islamophobia. To do so in Congress or state legislatures would introduce political considerations into judicial determinations regarding those concepts. For example, is it racist to support affirmative action or to oppose it? Should that line be drawn by whoever has more votes in a legislative body at a particular time?

One reason for this shortcoming may be that while it is unlawful for most institutions to discriminate on the basis of “religion” during the admissions process, “religion” is not a protected class under federal law for purposes of prohibiting discriminatory harassment. This should change. If Congress is to properly address anti-Semitism—and other anti-religious discrimination— on campus, it must make it unlawful for institutions of higher education to ignore allegations of student-on-student harassment on the basis of religion.

Sometimes a student engages in anti-Semitic or Islamophobic harassment on the basis of cultural and ethnic stereotypes as opposed to the actual religious beliefs in question. In recognition of this, the Department of Education maintains a longstanding policy of exercising jurisdiction in some cases dealing with anti-Semitism or Islamophobia that manifests itself via reliance on cultural or ethnic stereotypes, pursuant to federal laws barring educational institutions from discriminating on the basis of ethnicity or national origin. This is a good practice and should be law. Because policy not enshrined in law can change abruptly, Congress should formally codify the Department of Education’s jurisdiction in those cases.

The third step Congress should take to protect students from anti-Semitic and other forms of harassment is to statutorily define when conduct constitutes unlawful discriminatory harassment. The Supreme Court set forth that definition in Davis v. Monroe County Board of Education (1999). The standard set forth in Davis ensures that schools address discriminatory conduct without infringing on the First Amendment.

Congress should reject the Anti-Semitism Awareness Act and instead take the three steps outlined above. Doing so would more comprehensively, inclusively, and effectively address religious harassment without sacrificing free speech in the process.