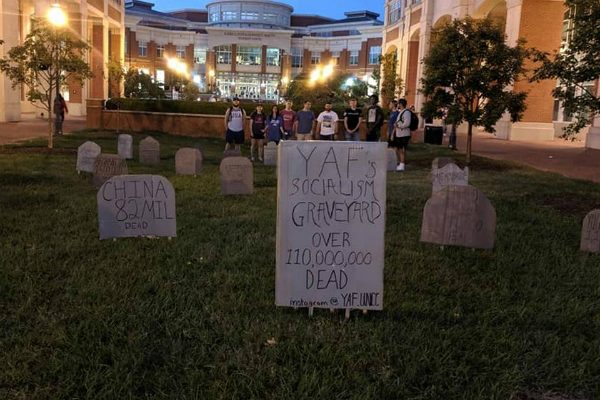 Being from Philly and living here, I am pretty used to walking by things I don’t like. Whether it’s trash in the street, protests around City Hall I don’t agree with, or Patriots fans breathing the air in my city, I’ve become accustomed to stroll past things I have a natural revulsion to.

This approach isn’t for everyone. As is my right as an American and, moreover, a Philadelphian, from time to time I like to express myself by yelling at trash, engaging protestors in spirited debates, or telling Pats fans that Tom Brady is a system quarterback. But forcibly silencing someone for expressing his or her opinion is a line that even I hold sacred.

So maybe that is why it is bewildering to me that year after year, FIRE comes across cases wherein student displays of political expression are stolen, go missing, or are taken down by administrators.

A recent case at the University of North Carolina at Charlotte is illustrative: Last month, in the run up to Halloween, UNCC students belonging to the group Young Americans for Freedom erected a “socialism graveyard,” which listed the number of deaths allegedly attributed to socialist policies. According to a local report, by 10 a.m. the next day the display was gone.

On Monday, October 14, our members met in front of the student union to erect our display. We were approached by several students who disagreed with us, but engaged in respectful dialogue, which we took as a good sign that our display would educate other students. Though several hostile students protested the premise of our anti-socialist display, most disagreement remained relatively calm.

However, we quickly realized that there was stronger disapproval for our conservative ideas when, the next day, we saw that someone had stolen every single tombstone we erected.

All signs so far indicate that students at UNCC or outside actors were responsible for stealing the display. Schambach does not believe campus administrators removed the display and UNCC — a FIRE “green light” school — noted as much in a statement to FIRE (excerpt):

UNC Charlotte did not remove the Young Americans for Freedom (YAF) display on campus and University administration connected with the organization multiple times based on their concerns.

Incidents like this one seem to happen almost every day on college campuses. Just last week, administrators stopped pro-life students at Rocky Mountain College from erecting tiny crosses on a lawn to protest abortion, claiming that the display violates a policy on “divisive” expression. Also last week, students at Stanford University found their posters promoting a talk by Ben Shapiro torn down or defaced.

Thefts of political displays or the removal of posters may not seem like a big deal on their own. After all, according to UNCC’s statement to FIRE, YAF’s display at UNCC was back up a few weeks later. Yet blatant acts of vandalism or theft like this denote a deeper problem happening across the country. During turbulent political periods, it can sometimes feel as if things are so bad, political enemies so singularly and especially evil, that there is no other alternative than to resort to deplatforming or shutting down speech and expression.

Those who advocate for this do so at their own peril. Once the rules of engagement are changed, your political opponents can use violence, theft, and deplatforming tactics right back at you, creating a race to the bottom for civil discourse. Do we really want to live in a society where the political norms are that you can do whatever you want to your political opponents so long as you aren’t caught doing it on camera?

As always, FIRE advocates for a “more speech” approach to ideas or displays that students might find offensive. Talk, confrontation, and counter-protests are all completely valid ways to address speech you don’t like. It is during periods of intense partisanship especially that our rights must be closely guarded as we have hard discussions. FIRE trusts students to be able to have these conversations.