On May 26, Arcadia University dropped a Title IX investigation against media and communication professor Alan Powell — an investigation Arcadia should’ve discarded after reading the complaint. 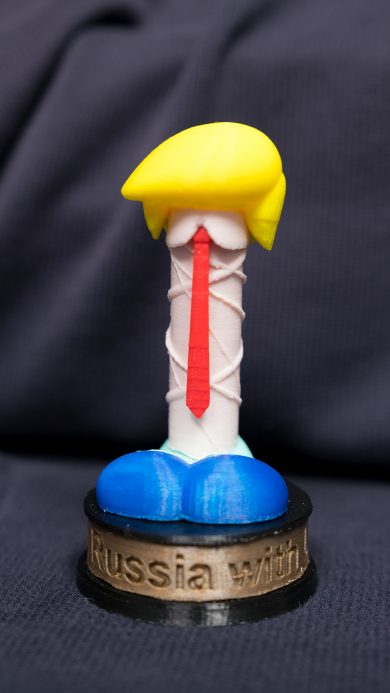 The focus of the investigation? An art installation critical of President Donald Trump, called “Waste Show,” which featured tweets, speeches, and recordings from Trump, a Bob Dylan song, audio and video from Nazi propaganda film “The Triumph of the Will,” miniature phallic figures intended to look like Donald Trump, and more. The show was produced by video collective Termite TV, created by Powell and a group of Arcadia alumni and students, and displayed February 14 – March 23 in Arcadia’s Murphy Hall, where Powell’s office resides.

The Title IX investigation, which was launched in May, was not the first hurdle Powell’s installation faced.

Months earlier, on March 3, a fellow Arcadia professor notified Powell that she had received a student complaint about the installation. She did not provide the student’s name when forwarding the complaint. It stated, in part:

I don’t want to have to see and hear the footsteps of hitler and his henchmen at 11 o’clock at night when I’m alone. I don’t want to see implied genitals or read vulgar language or hear politicians’ voices when using the restroom, copier, or water fountain.

I’m really trying to not make waves and have been trying since this exhibit started but I just can’t help it because this is flat out wrong and we don’t deserve to have our learning environment decimated with sexually explicit language, images, antisemitic audio and video and trash. It is effecting my ability to sleep, focus, and most importantly, learn.

Powell replied to the professor, expressing concerns that “[i]f the political voice is suppressed by the university and our country it is the beginning of the end.” He included on the email Arcadia students and alumni who had worked with him on the installation, who joined him in opposing censorship of the piece. One participant wrote:

Despite the way in which some professors may look at and treat students, we are all adults at this institution, not children. Complaining about this exhibition’s sounds and imagery as a disturbance to student’s working in Murphy makes me question why the art program at this university even exists, if only to make “safe art”. If the videos are playing too loud, we can certainly turn them down a bit, but we should not be silencing them. I spend most of my time in Murphy everyday working in thesis, in class, and in work study and have never been bothered by the work that has been displayed in the halls. …

We should not take this exhibition away or silence it out of discomfort. Art is meant to express meaning and provoke thoughts, and that is exactly what this exhibition is doing.

Other students and alumni chimed in with similar messages of support. Powell then offered to turn down the sound from the film, but asked that students be encouraged to make their own contributions to the piece, rather than silence it:

you are welcome to turn down the sound after hours, but it is the returning of the Triumph of the Will that has us scared. This exhibition is/ was created by individuals who are of Jewish Heritage, Latino, Afro-American, and first generation immigrants. I lost my European family at [Buchenwald] Concentration Camp. My great Aunt and Uncle were be-headed in a Japanese Camp and my father walked on the ashes of Hiroshima two weeks after the bomb. I was taught to “ Not let this happen Again” The students are welcome to deface the art work, [p]ut up protest signs, have a forum, whatever you want to do. In non-violent protest you are taught to make your opponent show their hand. T[h]is is all part of the process to keep this an open University and a free society. Y[o]u may do whatever you want .. it becomes part of the show.

Thinking that the entire email exchange would be a worthwhile addition to the installation itself, Powell’s students printed out the emails and hung them on the walls. 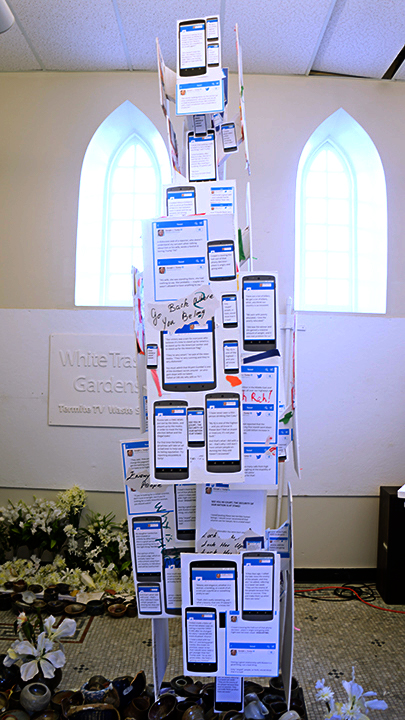 The emails’ presence in the installation was short-lived. According to Powell, administrators demanded that he remove the email exchange from the installation, claiming that Powell named the complaining student — even though Powell was never provided his or her name in the first place.

The email controversy proved to be the beginning, not the end, of Powell’s battles with Arcadia over the artwork. On May 17, Assistant Vice President of Human Resources Rhonda Hospedales contacted Powell to inform him that he was under a Title IX investigation:

Hope I find you well.

I am writing to request a meeting with you within the next few days, if possible.  I have recently been assigned a complaint from some students  who allege that they suffered an adverse impact from exposure to your exhibit in Murphy Hall earlier this Spring. The University has been advised that we must investigate the complaint to determine whether the students may have any rights under Title IX.  Please note that this is just a preliminary investigation and no findings of a violation have been made at this time. I am simply in the process of interviewing persons who may have information.  I also wish to emphasize that the University continues to remain committed to your rights to exercise academic freedom of speech and that this investigation does not seek to address or jeopardize same,

I was only able to speak to the students last week and yesterday and would like to now meet with you to advise you of the general nature o the complaint, share the allegations, and give you an opportunity to present information, including witnesses.  I cannot stress enough that this investigation should be treated confidentially, given that they involve complaint from students.  Thus, the contents of this email as well as future communication should not be shared with anyone outside of yourself or made public.

I have copied Kate Waters on this email who works as an HR Specialist in the HR office. She will reach out to you directly to find a date and time convenient for us to meet.  She may also be present at the meeting to take notes.

I look forward to meeting with you soon and timely closing out this matter. I promise to answer all of your questions at that time. [Errors in original.]

On May 23, Powell met with Hospedales to discuss the allegations. According to Powell, he was asked to move parts of the installation to the basement in Arcadia’s library, accused again of posting identifying information for the student who complained about the art in March, and informed that he could be facing further Title IX complaints because the artwork from the installation was still visible inside his office. 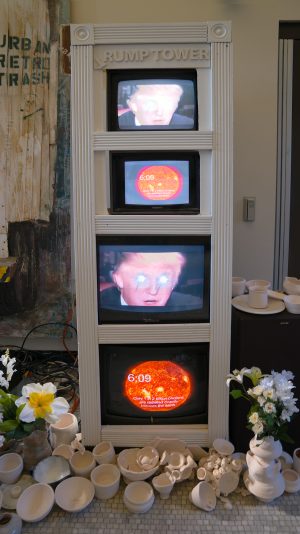 Later that week, Powell was informed that “the complaint does not raise any actionable Title IX violations” and “[o]utside of some recommendations about how to handle future similar situations, [Hospedales] do[es] not anticipate needing to reach out to you on this matter.”

While this is the only correct outcome, it’s alarming that Powell was even investigated in the first place.

Universities like Arcadia must, of course, take allegations of sex-based discrimination seriously. However, Title IX does not excuse administrators from their responsibility to exercise good judgment and common sense. In Hospedales’ email, she explained that the complainants alleged “adverse impact from exposure to your exhibit.” If art installations commenting on contentious current day issues could constitute violations of Title IX simply because their material is sexually-themed or could cause an “adverse impact,” then there isn’t much artwork that wouldn’t be under investigation. As FIRE has stated many times before, the fact that artistic expression makes people uncomfortable — which is often the point! — does not excuse censorship or investigation of it.

And, as my colleague Adam Steinbaugh explained last year, investigations like the one Powell experienced can have a negative impact that lasts long past the end of the investigation — a “chilling effect” that inspires professors and students to self-censor. After all, a student or professor might rationally conclude that the best way to avoid another baseless investigation in the future is to steer clear of controversial expression and topics that could elicit complaints.

Fortunately, Powell did have some allies, including members of his department and Provost and Vice President for Academic Affairs John Hoffman, in defending his and his students’ artistic expression, but he ultimately still felt that his speech was chilled by the investigation.

This is certainly not the first baseless Title IX investigation into speech, but it should be the last. Submit a case to FIRE if your artistic expression ever lands you under investigation. We want to hear from you.