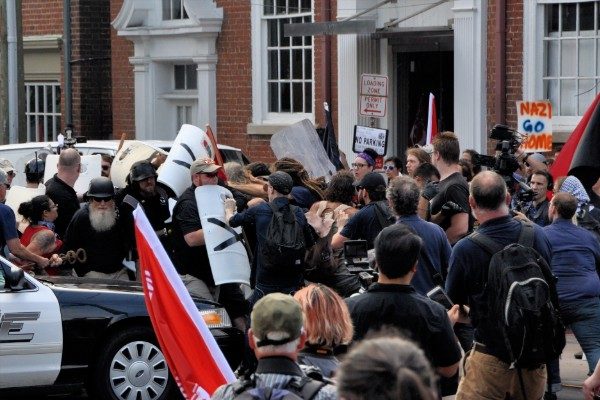 For millions of Americans, the “Unite the Right” rally in Charlottesville, Virginia was incredibly shocking, and no one felt this reality more than University of Virginia students and Charlottesville residents.

On the night of Aug. 11, 2017, a series of racist chants and white supremacist slogans  — which included phrases like “White Lives Matter” and “Jews will not replace us” — disrupted the summer silence that had settled over UVA’s campus. This activity occurred as a group of 250 white supremacists marched through campus the night before their rally in support of a Robert E. Lee statue that the City Council had voted to remove less than two miles away. That night, dozens of UVA students, faculty, and administrators linked arms around the university’s Thomas Jefferson statue, blocking the “alt-right” marchers from accessing the memorial. Following the march, a fight broke out between the marchers and counter-protestors during which UVA students and administrators were struck by tiki torches, hit with mace, and punched.

The havoc continued the next morning near the Charlottesville Downtown Mall, culminating in the death of social-justice activist Heather Heyer and the hospitalization of a UVA student after a white supremacist rammed his car into a group of protestors.

With members of the UVA community injured in the wake of these events, the Unite the Right rally placed extraordinary pressure on the university’s administration. Not only did they have to address these events as a university working to diversify its student body and come to terms with the racially-charged past of its founder, Thomas Jefferson, but they also had to decide whether or not these goals of racial justice conflicted with their commitment to the First Amendment. As a high school student preparing my application to the university, these events and the administration’s reactions were ones I watched closely.

Since October 2010, UVA has been named a “green light” institution by FIRE, meaning that the university maintains no policies that unconstitutionally restrict students’ free speech. The university’s commitment to free speech only expanded in the years that followed its earning a green light rating. For example, in both 2011 and 2012, UVA was named as one of FIRE’s seven best colleges for free speech, and in March 2017, then-university president Teresa Sullivan advocated for students’ First Amendment rights at an American Council on Education conference.

It is this deep commitment to upholding students’ constitutional rights that prevailed in the months following the Unite the Right rally. Despite student requests for the life-long ban of white supremacist hate groups from campus, the administration refrained from targeting these groups simply for their political views. Instead, in response to the rally, the university strongly condemned the marchers’ violent actions and issued four-year trespass warnings to individuals who were determined by law officials to have committed or conspired to commit acts of violence on campus.

There is a distinction that must be made between conduct and speech, one that UVA officials have made persistently since the attacks. In an interview with the UVA student newspaper, Dean of Students Allen Groves — who was himself targeted while assisting students to safety during the events of Aug. 11 — outlined this belief: “I believe certain speech by the alt-right/white nationalists on August 11 was hateful speech that is nonetheless protected by the Constitution, while other speech that night was likely incitement that is not protected speech.”

As a high school senior hoping to enroll in a university with wide-ranging free speech protections, this distinction was one that was incredibly important to me when making my ultimate decision, especially knowing how some college administrators have used instances of conflict to justify restrictions on speech. The administration’s handling of this situation and continued protection of free speech are some of the reasons I ended up choosing UVA.

Coming up on the second anniversary of this tragedy, I believe the UVA community has demonstrated its continued dedication to the First Amendment, both through the actions of its administration and its student body.

For the administration’s part, the university has been a supporter of freedom of expression, continually practicing what it preaches. During my orientation last July, Dean Groves outlined the university’s support for freedom of speech and freedom of expression despite the events of the Unite the Right rally, acknowledging the hatred-filled remarks of the “alt-right” marchers, while reaffirming the university’s belief that the solution to their hostility is not to shut down one side of the debate but to give both the opportunity to speak.

When UVA’s Miller Center for Public Affairs received backlash from the community for accepting President Donald Trump’s former director of legislative and intergovernmental affairs as a senior fellow, the university defended his appointment as academically sound. Later that year, former President Bill Clinton came to campus and delivered the keynote address at UVA’s Presidential Ideas Festival, further demonstrating the university’s commitment to hosting a wide range of viewpoints.

During my time at the university, I have also seen student groups regularly invite individuals from both sides of the political spectrum to take part in rigorous debate on campus. Each time, the university has reminded event attendees of the university policy that forbids students from “disrupt[ing] an invited or permitted speaker” and is intended to preserve the “ability of other attendees to see or hear a speaker” — in effect, a policy that prevents the occurrence of the heckler’s veto.

Students have invited diverse speakers from conservative commentator Anna Paulina to democratic presidential hopeful Beto O’Rourke to campus in events attended by hundreds of students. These events have overwhelmingly proceeded in accordance with university policy and have brought differing and oftentimes contentious debates to our campus.

So, yes, there were white supremacists who twisted UVA and Charlottesville to fit their image of the world, and, yes, they did this through violence. But two years later, the university standing in its wake is one stronger than before — one willing to face issues head on, tackle difficult subjects, and allow its students to protest and speak out, making each of us better citizens in the end.