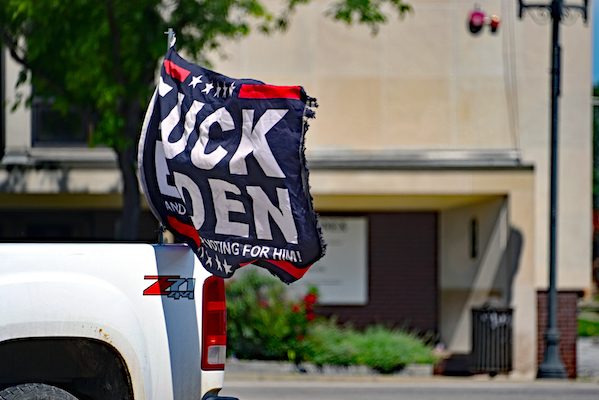 A municipal court judge in New Jersey recently ordered a homeowner to remove banners containing the phrase “Fuck Biden” from her property or face a $250-a-day fine, finding she violated a borough ordinance on obscenity.

The judge’s decision was widely derided, as the language on the banners is clearly protected by the First Amendment and does not even come close to the legal standard for obscenity set forth in Miller v. California and articulated in the ordinance. Facing this outcry (and the homeowner’s representation by the ACLU), the town decided last week to dismiss the underlying summons against her.

But at Kean University, a public institution located just two miles from the banners in question, students can still be punished over the very same phrases.

Kean’s “Computer-Related Acceptable Use Policy” bans placing information that is “abusive, profane or sexually offensive to the average person” on its computer or network systems — “on or off campus.” For that reason, we’ve made the policy FIRE’s Speech Code of the Month for August.

The message “Fuck Biden” could certainly be deemed abusive or sexually offensive, and is self-evidently profane, as it contains profanity. It therefore would violate Kean’s policy. But under the First Amendment, speech cannot be limited by the government for those reasons alone.

“The right to hang banners is a small thing, but the value of free speech inheres in acts of individual expression just as much as in grand statements of collective purpose.” – The New York Times Editorial Board

Indeed, Justice John Marshall Harlan II wrote about the same word in his opinion in Cohen v. California, famously observing that “while the particular four-letter word being litigated here is perhaps more distasteful than most others of its genre, it is nevertheless often true that one man’s vulgarity is another’s lyric.”

Under Kean’s policy, if a student were to simply download a photo of that homeowner’s fence and its banners (or Harlan’s opinion in Cohen, for that matter) while using the university’s network, they could face punishment.

The policy’s issues don’t stop there: it goes on to state that students may not “harass others by sending annoying, threatening, libelous, or sexually, racially, or religiously offensive messages.”

And I’ll spare you my New Jersey jokes. As much as a Philadelphian like myself enjoys teasing our close neighbor, this isn’t a Jersey-specific problem. As The New York Times editorial board astutely observed, the judge’s decision to order the homeowner to remove her profane banners is symptomatic of a troubling trend across our nation: “a growing sense among many Americans that the United States cannot afford to maintain the full measure of its foundational commitment to free speech.”

The board went on to warn that the “strength of First Amendment protections depends on public support. History shows that when faith in the value of free speech is eroded, the freedom is soon eroded, too.”

And while that warning may seem overstated when considering the simple, crude nature of the banners at issue, the Times’ board rightly explained: “The right to hang banners is a small thing, but the value of free speech inheres in acts of individual expression just as much as in grand statements of collective purpose.”

Indeed, the right of students to engage in subjectively profane or offensive speech online may seem a small thing, but the defense of students’ ability to engage freely in the marketplace of ideas is critical to the health of our country’s discourse, whether that speech occurs online or in the public square.

And while the university may attempt to justify this policy by arguing it has not been applied in a restrictive way, Justice Harlan’s opinion in Cohen is again instructive: “[W]e think it is largely because governmental officials cannot make principled distinctions in this area that the Constitution leaves matters of taste and style so largely to the individual.”

We can’t trust that the application of such broad, restrictive language will be sound. The policy invites administrative abuse, and must be revised to remove the threat that it will be applied to restrict the online version of that New Jersey homeowner’s signs.