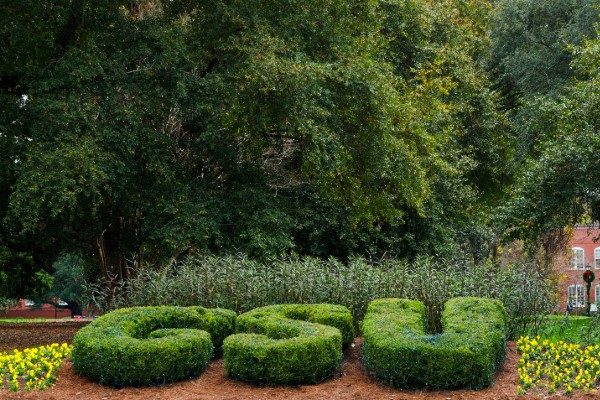 On Wednesday, author Jennine Capó Crucet spoke at Georgia Southern University, where first-year students were reading her novel, “Make Your Home Among Strangers: A Novel.” Crucet’s discussion about her award-winning novel, which involves themes of race and class, was — to put it mildly — not well-received by some students, who objected to Crucet’s “racism towards white people.”

What was said during the lecture is not entirely clear; the student newspaper, The George-Anne, reported via Twitter that “the link that had the full video of Crucet’s lecture has been taken down.” Crucet’s statement on the matter explained that she had been asked to “give a talk on issues concerning diversity and the college experience.” The George-Anne’s write-up of the event recounted part of the question-and-answer portion of Crucet’s appearance:

“I noticed that you made a lot of generalizations about the majority of white people being privileged,” one respondent said into the microphone. “What makes you believe that it’s okay to come to a college campus, like this, when we are supposed to be promoting diversity on this campus, which is what we’re taught. I don’t understand what the purpose of this was.”

Crucet immediately responded to the student with audible reactions from the audience.

“I came here because I was invited and I talked about white privilege because it’s a real thing that you are actually benefiting from right now in even asking this question,” Crucet said.

“What’s so heartbreaking for me and what is so difficult in this moment right now is to literally have read a talk about this exact moment happening and it’s happening again. That is why a different experience, the white experience, is centered in this talk.”

After Crucet’s response, more questions regarding the novel and Crucet’s dealing with being a minority in America were asked and Crucet responded politely.

Other students reportedly walked out.

One student told BuzzFeed News that after the talk, some 20 to 30 students gathered around a fire pit to burn copies of the novel. Students tweeted photos of burning or shredded books at Crucet. Video posted by one student depicts students burning at least one book on a park-style grill on campus:

so after our FYE book’s author came to my school to talk about it… these people decide to burn her book because “it’s bad and that race is bad to talk about”. white people need to realize that they are the problem and that their privilege is toxic. author is a woman of color. pic.twitter.com/HiX4lGT7Ci

A statement posted on Facebook by the department chair of writing and linguistics at GSU shared that some students had “gathered outside [Crucet’s] hotel,” and condemned “destructive and threatening acts” as contrary to the university’s values. (The university’s administration denies having any “knowledge of any students or crowd that gathered outside of her hotel” and contends that Crucet “was moved to another hotel at her request.”)

Crucet’s second appearance — set to take place the following day at a different GSU campus — was cancelled “due to unforeseen circumstances.” Crucet responded on Twitter that the event had been cancelled “because the administration said they could not guarantee my safety or the safety of its students on campus because of open carry laws.”

A GSU spokesperson tells BuzzFeed News that the university is “not planning any actions against any of the students involved in this incident,” and that “[w]hile it’s within the students’ First Amendment rights, book burning does not align with Georgia Southern’s values nor does it encourage the civil discourse and debate of ideas.”

As a matter of First Amendment law, that’s right. Generally-applicable statutes or regulations may prohibit conduct connected with book-burning. For example, a law may prohibit any open flame, or penalize stealing someone else’s property to burn. While GSU’s student conduct regulations prohibit “setting any unauthorized fire” on GSU property, it’s unlikely that starting a fire in a university-provided charcoal grill can reasonably be said to be unauthorized.

Barring any generally-applicable restrictions to the contrary, the expressive act of burning a book is itself protected by the First Amendment. Demonstrators have long burned symbolic objects to convey their contempt or rejection of governments, institutions, or political, social, or religious views. As the Supreme Court ruled in Texas v. Johnson (1989), burning the American flag is protected political expression. So, too, is burning (or destroying) sneakers, effigies, Keurigs, bras (at least in myth), and “Make America Great Again” hats.

That expressive conduct is protected does not immunize it from criticism, however, and burning books is illiberal conduct worthy of derision. Book burning is a particularly disquieting form of expression because it has historically been tied to censorship (i.e., destroying literature to prevent or deter others from reading it) or violence against minorities.

The most well-known example of book burnings occurred in 1933, when German student groups burned books that Nazi leaders viewed as “un-German.” The site of one the 1933 book-burnings is now commemorated with a plaque engraved with the words of a playwright whose books had been burned: “Dort, wo man Bücher verbrennt, verbrennt man am Ende auch Menschen.” (“Where they burn books, they will, in the end, burn human beings too.”)

As a Georgia Southern professor wrote today in a letter addressed to “Bookburners, Bystanders, Faculty, and Students”:

The history of books is not one free of strife and happy endings, but apparently and tragically this history has been forgotten. Many people have died so we can enjoy the privilege to read as much as we like and what we like, even hated-filled, maliciously misinformed books. Slaves in this nation risked their own lives just to learn how to read, Protestants in Europe lost their lives because they wanted to read the Bible in their own language, and many other groups throughout the world risk their lives to read today as Georgia Southern University experiences this embarrassing moment.

Today, book burning is rare in the United States, although not unheard of. (Destruction of reading materials is still widespread in authoritarian countries like Turkey, where over 300,000 books have been destroyed since 2016.) FIRE is not aware of any other instance in which a book has been burned on a campus in the United States in recent years.

The appropriate response to offensive or illiberal expression is more speech, not less.

And that’s what makes the cancellation of Jennine Crucet’s appearance yesterday all the more troubling, as it means that students will be deprived of the ability to hear her respond to critics and, for those who disagree with her, to challenge her views. This is (by far) not the first illiberal response we’ve seen to criticism of white people; you don’t even have to look outside of Georgia for a recent example.

Universities have a non-negotiable obligation to take affirmative steps to protect the safety of speakers and address reasonable concerns of the possibility of violence. The ability to speak on a public campus cannot be left to the diktat of the bottle-thrower or the book-burner. Georgia Southern University should transparently address what steps it took to preserve safety and assure its students, faculty, and the public that the university remains committed to the free exchange of ideas.