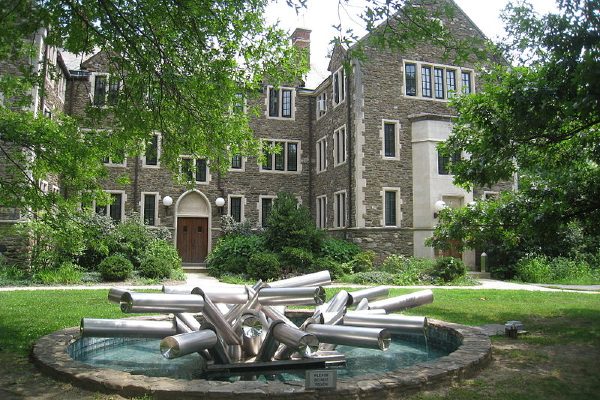 Earlier this month, Bard College rightly cleared two students — both members of the college’s chapter of Students for Justice in Palestine — of charges arising out of an October protest.

On Oct. 10, members of the Bard chapter of SJP protested at a panel called “Who Needs Antisemitism?”, which was hosted by the Hannah Arendt Center at Bard. The primary speaker on the panel was retired Harvard professor Ruth Wisse. At the beginning of her presentation, Wisse acknowledged the presence of the protesters in the crowd who, according to Palestine Legal’s letter to Bard, were standing silently and holding signs.

Approximately 10 minutes into Wisse’s presentation, one of the students, later identified as Ben Mulick, can be heard speaking loudly in the crowd; Wisse objected to his statement.

Mulick then says (at 1:09:08 in the above video): “Equality is not shouting down someone who is different, it is opening your ears and listening.”

The exchange continued for less than a minute.

According to Palestine Legal, Mulick was then asked to leave the audience and he complied, after which Wisse completed her presentation.

During the subsequent question and answer session, the remaining students chanted (at 1:34:20 above) “From Simon’s Rock to Palestine, doing nothing is a crime” four times before they were also asked to leave the room.

These two instances of protest together lasted roughly a minute.

The protest gained some media attention after the panel’s moderator published an opinion piece about her experience.

In early November, Bard notified two of the protesters that they were being investigated for potential violation of Bard’s Free Speech Policy and Harassment, Discrimination and Stalking Policy. Notably, Bard’s Free Speech Policy receives FIRE’s highest “green light” rating, meaning its plain language does not seriously imperil student speech. But the policy’s reported application here is troubling. According to Palestine Legal, the students were investigated and called before a panel of Bard professors to discuss the charges in December. The students were ultimately cleared of the charges earlier this month, following advocacy on their behalf by Palestine Legal.

The students’ two short instances of protest here were not sufficiently substantial to amount to a material disruption, and remained protected expression, not unprotected conduct.

This is the correct result. The students’ two short instances of protest here were not sufficiently substantial to amount to a material disruption, and remained protected expression, not unprotected conduct. Wisse’s presentation went on as planned, even incorporating the presence of protesters into the topic of her talk. Further, when the protesters were asked to leave, they complied.

Schools must carefully consider whether protests of speakers constitute protected speech or cross the line into unprotected conduct that courts have referred to as the heckler’s veto. Generally speaking, protest is protected unless it creates a substantial or material disruption to an event occuring in a space that has been reserved. Fleeting disruptions don’t meet this standard. This makes sense because speakers don’t have the right to only receive positive feedback from audiences: it can’t be permissible to clap or cheer, but impermissible to boo. But when conduct is intended to be or proves to be disruptive and sustained long enough to prevent an event from unfolding as planned, that conduct deprives the speaker of the ability to communicate their message and deprives the audience of the opportunity to learn as well.

Making this sort of determination about a particular instance requires close consideration of the facts of each case. Institutions must avoid punishing protected protests, but must also protect speakers from the heckler’s veto. Luckily, here, the event was recorded, so there could be no dispute about what transpired, and Bard could readily determine that the protesters’ actions did not constitute a substantial disruption.

Although Bard ultimately found — correctly — that these students did not violate college policy by engaging in protected expression, the college’s decision to launch a months-long investigation into these students for their seconds-long vocal protest is concerning. If any minor disruption were sufficient to subject a student to discipline, college and university administrators would have discretion to punish a wide range of speech — or burden dissenting protesters by subjecting them to lengthy investigations — even when that speech did not impact the institution’s interest in fostering open discussion and debate on campus. This discretion ultimately presents the risk that administrators may be penalizing students for their viewpoint, rather than for actually disruptive conduct.

Investigations themselves — while permissible in some instances, such as when there is a close call as to whether a disruption was material or substantial and thus potentially unprotected expression — chill speech. Here, the protesters’ comments, memorialized in publicly-available video, lasted a few seconds, and the protesters complied when they were asked to leave the event. Given that the exchange was captured on video, the college had all the information it needed to determine whether an investigation or charges were merited before bringing those charges. Further, disciplinary charges can have lasting consequences for students. For example, students are frequently asked about prior disciplinary charges when applying for jobs, graduate school, or professional licenses — even if those charges were later dropped.

“Bard College upholds with its free speech policy the open exchange of ideas,” she said, “even as it prohibits conduct that employs force or threat of force.”

FIRE is glad to hear that Bard ultimately chose to uphold this commitment and clear these two students of all charges.