EDITOR’S NOTE: This article is part of FIRE’s annual “Best of Newsdesk” retrospective, where we search the archives to bring you stories worth a second look. This piece originally ran December 27, 2016.

In September 2013, FIRE released an infographic reporting for the first time on the number of schools in our Spotlight Database that have “free speech zones”—policies limiting student demonstrations and other expressive activities to small and/or out-of-the-way areas on campus. At that time, roughly one in six of the colleges and universities in Spotlight maintained a free speech zone policy.

This year, we decided it was time to take a fresh look at that figure, since a lot has changed over the last few years. And as we announced in our just-released 2017 report on campus speech codes, the number of free speech zone policies is down: Today, roughly one in 10 of the schools we surveyed maintain a free speech zone policy.

So what has changed?

First, in July 2014, FIRE launched our Stand Up For Speech Litigation Project (SUFS), through which we have coordinated legal challenges to numerous free speech zone policies nationwide. Thanks to SUFS, a number of colleges and universities have revised their free speech zone policies, including the University of Hawaii at Hilo, Dixie State University, California State Polytechnic University, Pomona, Modesto Junior College, Citrus College, and Blinn College. And beyond the schools directly affected, SUFS has put other public colleges and universities on notice that they maintain free speech zones at their legal peril, almost certainly prompting additional revisions. 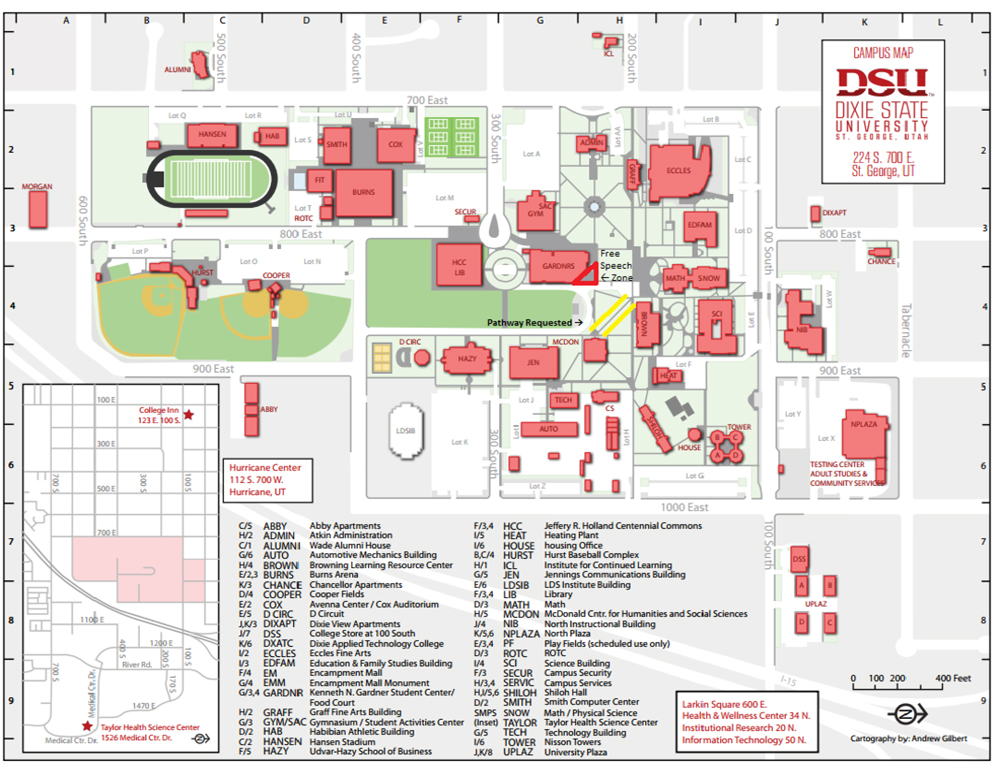 FIRE has helped eradicate free speech zones like this one at Dixie State University (red triangle) that comprised roughly 0.1 percent of campus. (Click for larger view.)

The percentage of schools maintaining restrictive speech codes in general has also declined since September 2013. When we released our 2014 report on campus speech codes, 59 percent of the institutions we surveyed earned FIRE’s worst, “red light” rating. In our just-released 2017 speech code report, 39.6 percent of schools received a red light rating.

As we cautioned in our recent report, however, this good news does not mean that free speech advocates can rest on their laurels. To the contrary—the decline in speech codes, including free speech zone policies, over the past few years has been the result of a tremendous amount of hard work. If we grow complacent in the fight for free speech on campus, we could easily see these gains reversed.

Moreover, the fact remains that a large number of colleges and universities still impermissibly burden students’ ability to protest and demonstrate on campus. Beyond the one in 10 schools that still maintain free speech zone policies, a large number of schools, while not limiting speech to designated areas, maintain onerous notice-and-permit requirements that make spontaneous expressive activity difficult. At Lake Superior State University, for example, “prior to sponsoring a rally, demonstration, march or other event, a group or organization representative must complete and submit an event application (see below) at least 72 hours in advance of any activity to the Public Safety Office.” That’s just one of many similar policies we’ve encountered. Much work remains to be done.

Going forward, FIRE will continue to update our free speech zone numbers on an annual basis, in addition to reporting on other emerging trends in campus speech codes.