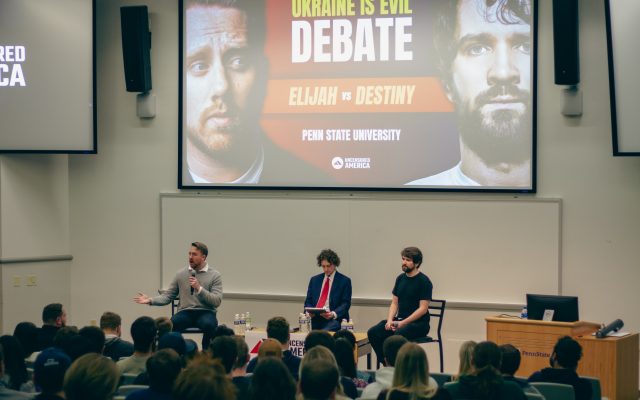 Controversial on-campus speakers or events often put a public university’s obligation to uphold students’ rights to free speech to the test. Universities are charged with not facilitating a “heckler’s veto” by canceling or impeding events due to concerns about an audience’s reaction. At the same time, they must also not levy excessive security fees on student groups in order to allow the events to proceed without significant disruption. These priorities require a delicate balance.

Unfortunately, at Penn State, administrators have failed to strike such a balance. In late April of this year, the Penn State chapter of Uncensored America organized a debate between Elijah Schaffer, a reporter for the conservative outlet The Blaze, and Steven “Destiny” Bonnell, a political commentator and YouTube personality. The debate proceeded without disruption.

Penn State has unconstitutionally affixed a viewpoint-based price tag to the group’s expression.

But after the debate, Penn State administrators sent Uncensored America an invoice for more than $1,800 in security fees for five campus police officers who attended the event as a security measure. The problem? The administrators hadn’t communicated this security requirement to the students clearly ahead of time, and even if they had, the imposition of excessive security fees is a clear violation of students’ First Amendment rights.

As a public university, Penn State is bound by the First Amendment. And in Forsyth County v. Nationalist Movement, the Supreme Court held that levying security fees on events based on the anticipated hostile reaction to speech is unconstitutional. We wrote to Penn State on June 30 calling on the university to rescind, or significantly lessen, the security fees. As we wrote in our letter:

​​By forcing Uncensored America to pay more than $1,800 in security fees after holding its event, Penn State has unconstitutionally affixed a viewpoint-based price tag to the group’s expression. The Supreme Court addressed precisely this issue when it struck down an ordinance in Forsyth County, Georgia, which permitted the local government to set varying fees for events based upon how much police protection the event would need. Declaring the ordinance a violation of the First Amendment, the Court wrote “[t]he fee assessed will depend on the administrator’s measure of the amount of hostility likely to be created by the speech based on its content. Those wishing to express views unpopular with bottle throwers, for example, may have to pay more for their permit.”

Moreover, imposing exorbitant security fees due to the controversial nature of Uncensored America’s event effectuates a heckler’s veto, as it allows an audience’s reaction — or perceived reaction, as is the case here — to dictate the price a student group must pay to hold an event. This means that a student group could be priced out of holding a controversial event if the audience reaction is anticipated to be too disruptive.

Penn State must rescind the fees altogether, or calculate a more reasonable fee, and do so in a timely manner, so Uncensored America is able to hold more events on campus in the fall semester, which it would not be able to do with unpaid security fees. As we wrote in our letter, “Any administrative imposition of security fees on a student group must be guided by narrowly drawn, viewpoint- and content-neutral, reasonable, definite, and clearly communicated standards in order to comply with Penn State’s obligations under the First Amendment.”

Unfortunately, Penn State is not the only university to levy excessive security fees post-facto. Earlier this year, Dartmouth College canceled an in-person event featuring conservative journalist Andy Ngo, but nonetheless demanded that the university’s College Republicans chapter pay $3,600 in security fees for the event, even though it ended up taking place solely online. While Dartmouth is a private university — and thus not bound by the First Amendment as is Penn State — it makes promises of free expression to its students, putting both Dartmouth and Penn State in the position of burdening their students’ right to free expression. This is an unacceptable outcome that must be averted.