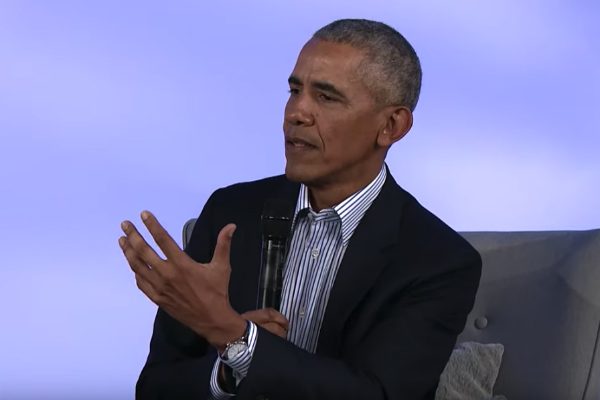 Former President Barack Obama specifically discussed college campuses in remarks this week about the “danger” of “call-out culture” and the importance of being willing to hear opposing viewpoints.

FIRE appreciates his remarks based on the calls for censorship we see too often on college campuses, which regularly result in the punishment of a student or professor for their views.

Obama made the comments — which The Washington Post subsequently characterized as garnering “rare bipartisan support” — at the Obama Foundation Summit in Chicago on Tuesday.

“One danger I see among young people, particularly on college campuses,” Obama said, “And this is accelerated by social media. There is this sense sometimes of ‘The way of me making change is to be as judgmental as possible about other people, and that’s enough.’”

“That’s not activism. That’s not bringing about change.”

Obama instead encouraged those who engage in call-out culture (also known as “cancel culture”) to acknowledge that “[t]he world is messy. There are ambiguities. People who do really good stuff have flaws.”

“If all you’re doing is casting stones,” he added, “you’re probably not going to get that far.”

Calls for illiberal restrictions are misguided

FIRE has seen plenty of stones cast in recent years, with students and faculty expressing a wide range of views being targeted for censorship by outrage mobs — on Twitter and beyond. Subsequently, many have actually been censored by their college or university in response to those calls, meriting intervention from FIRE.

FIRE supports student and faculty rights in a principled, non-partisan fashion. That means we don’t take sides on the views students and faculty express, and instead focus on advocating for their right to speak their minds. That’s true even when students use their rights to call for the infringement of others’ civil liberties, such as demanding censorship of speech they dislike.

Obama urged students to choose conversations — even tough ones — over censorship.

“Students are free to call for censorship of views they do not share and the punishment of those who hold those views,” we wrote earlier this year during a spike in those calls.

But while we defend the right to call for censorship or abolition of due process, for example, we have also criticized those calls as misguided:

[O]ur defense of the right to call for illiberal restrictions in no way means that FIRE supports those calls. To the contrary, we strongly believe that they are misguided, myopic, and contrary to our nation’s best tradition of free expression. FIRE opposes demands to reduce, eliminate, or violate the freedoms protected by either the First Amendment or private institutions’ comparable promises.

To the extent call-out culture and cancel culture represent threats to free expression and civil liberties in general, those trends are equally worthy of criticism.

Obama has criticized censorship before

Obama’s comments this week dovetail with those he made as president in 2015, when he argued that college students should not “be coddled and protected from different points of view.”

Obama urged students to choose conversations — even tough ones — over censorship.

“Anybody who comes to speak to you and you disagree with, you should have an argument with them,” Obama said. “But you shouldn’t silence them by saying, ‘You can’t come because, you know, I’m too sensitive to hear what you have to say.’ That’s not the way we learn.”

FIRE has a variety of resources available for both students and faculty looking to make their voices heard on campus.

And if you find yourself facing the campus call-out censors and need help, let us know.