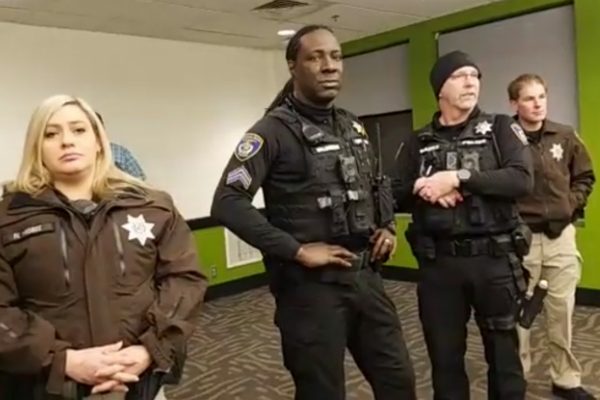 PORTLAND, Ore., March 12, 2019 — Last week, a group of Portland State University police officers stood by and watched as a heckler with a cowbell single-handedly hijacked a College Republicans meeting. This is the second time in 2019 that PSU allowed hecklers or would-be hecklers to shut down campus expression — and the second time the Foundation for Individual Rights in Education has demanded the university adhere to its First Amendment obligations.

FIRE first wrote to the university Feb. 18 after PSU’s law enforcement unilaterally cancelled a meeting of a socialist student group after the founder of the group Patriot Prayer said he would show up.

At the College Republicans’ March 5 meeting, campus police stood by as a protestor rang a cowbell during a speech from invited speaker and conservative blogger Michael Strickland. For more than an hour, the protestor circled the room ringing the cowbell and blocked the projector for Strickland’s presentation before he and two others left on their own accord.

“We want to deplatform you,” said the protester. “We want you to stop fucking talking.”

PSU defended the actions of the campus police, issuing a statement March 7 that “the officer used his professional judgment and determined not to threaten or restrain the individual so as not to escalate a potentially unsafe situation.” (Note: Video shows not one, but four law enforcement officers.)

“If one heckler with a cowbell is all it takes to silence expression at PSU, no one’s speech is protected,” said FIRE Executive Director Robert Shibley. “PSU must demonstrate that it takes its First Amendment obligations seriously and is willing to stand up for campus expression.”

PSU has developed a pattern of allowing a single political activist to send students’ expressive rights out to pasture. On Jan. 24, PSU abruptly cancelled a meeting of another student group, the International Socialist Organization, after learning that the founder of Patriot Prayer posted on the Facebook event page that he would “be there to ask questions,” asking the group to “be mature and respectful for [he would] do the same.” A student later commented, “Who wants to Fuck up Joey Gibson, leader of the fascist hate group patriot prayer? He’ll be here tonight.” Despite the ISO’s call for others not to engage with Patriot Prayer, the exchange caught the attention of university leadership. Minutes before the event was set to begin, ISO explained in a comment: “Patriot Prayer targeted the event and campus security shut our event down.”

PSU ignored the wishes of the students who discouraged the use of violence and wanted their meeting to proceed as planned. Then, it ignored FIRE’s letter requesting an explanation for the cancellation. When responding to FIRE’s open records request for any law enforcement records about the cancellation, PSU said it may have body camera footage, but producing it would require $108 per minute of footage to blur the faces. FIRE asked for the audio alone — which would eliminate the need to blur any faces at all — but PSU said it didn’t have the technology to extract audio and said that the university does “not believe the public interest warrants disclosure.”

“This year, PSU’s law enforcement have at least twice surrendered students’ expressive rights in the face of disruption,” wrote FIRE yesterday in its second letter to the university. “The message is clear: If you disagree with a student group at Portland State, left or right, simply threaten to disrupt their meetings. The police will be standing by.”

FIRE will continue to monitor the situation until the cows come home, and is committed to ensuring PSU lives up to its First Amendment obligations.