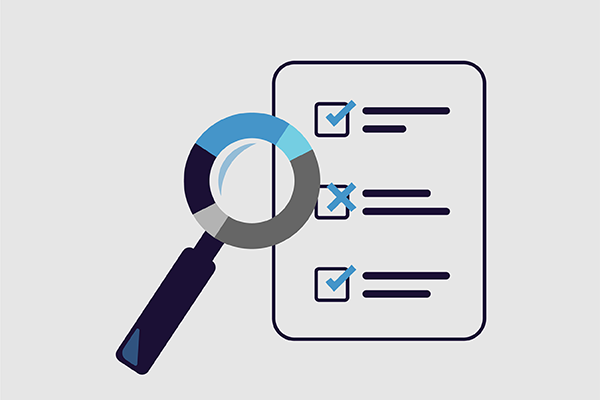 Although national-level data on current college student attitudes about free expression may allow for interesting cross-sectional comparisons, there are good reasons to believe that a plethora of factors interact to produce a unique climate for free expression on any particular campus. Thus, campus-specific data ultimately may prove more useful to prospective students considering which school to attend, and to individual students, faculty members, and administrators, who presumably are more interested in the state of affairs on their own campus then what is happening on campuses around the country.

This post explores some of the findings from these campus-specific surveys, and when appropriate to do so, compares them to each other and to the national survey data available. These analyses help to demonstrate how national surveys of college students can obscure considerable variation between campuses, but also help identify broad trends that may be occurring among the current cohort of college students regardless of the school they attend.

Some of the campus-specific surveys were conducted in collaboration with a professional polling organization (Pomona College, the University of Nebraska system, Yale University); others were conducted by faculty members on the respective campuses (Smith College, the University of North Carolina); and some were even conducted by on-campus student newspapers (Dartmouth College, Hamilton College). Although none of the surveys were identical to the Knight survey or in many cases to each other, a number of them included questions asked in the Knight survey and other national surveys. Thus, there is enough overlap to make some comparisons and draw some preliminary conclusions about the value of campus-specific data.

The table below provides additional information for each specific campus, including the overall percentage of undergraduates on each campus who were surveyed:

As can be seen in the figure below, a majority of students—roughly 3 in 5—consistently report that the climate on their campus deters speech for some people in each of the Knight surveys. This is consistent with recently released data from a 2019 survey by Heterodox Academy , and with a Cato/YouGov 2017 survey that more narrowly asked if the political climate on campus deterred speech. (Note: I designed the Heterodox Academy survey and oversaw the data collection, but did not write the published report because I was on paternity leave.) 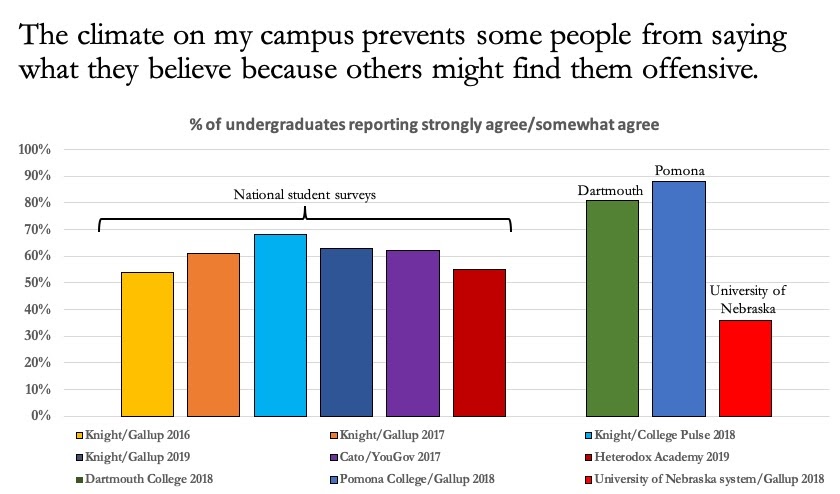 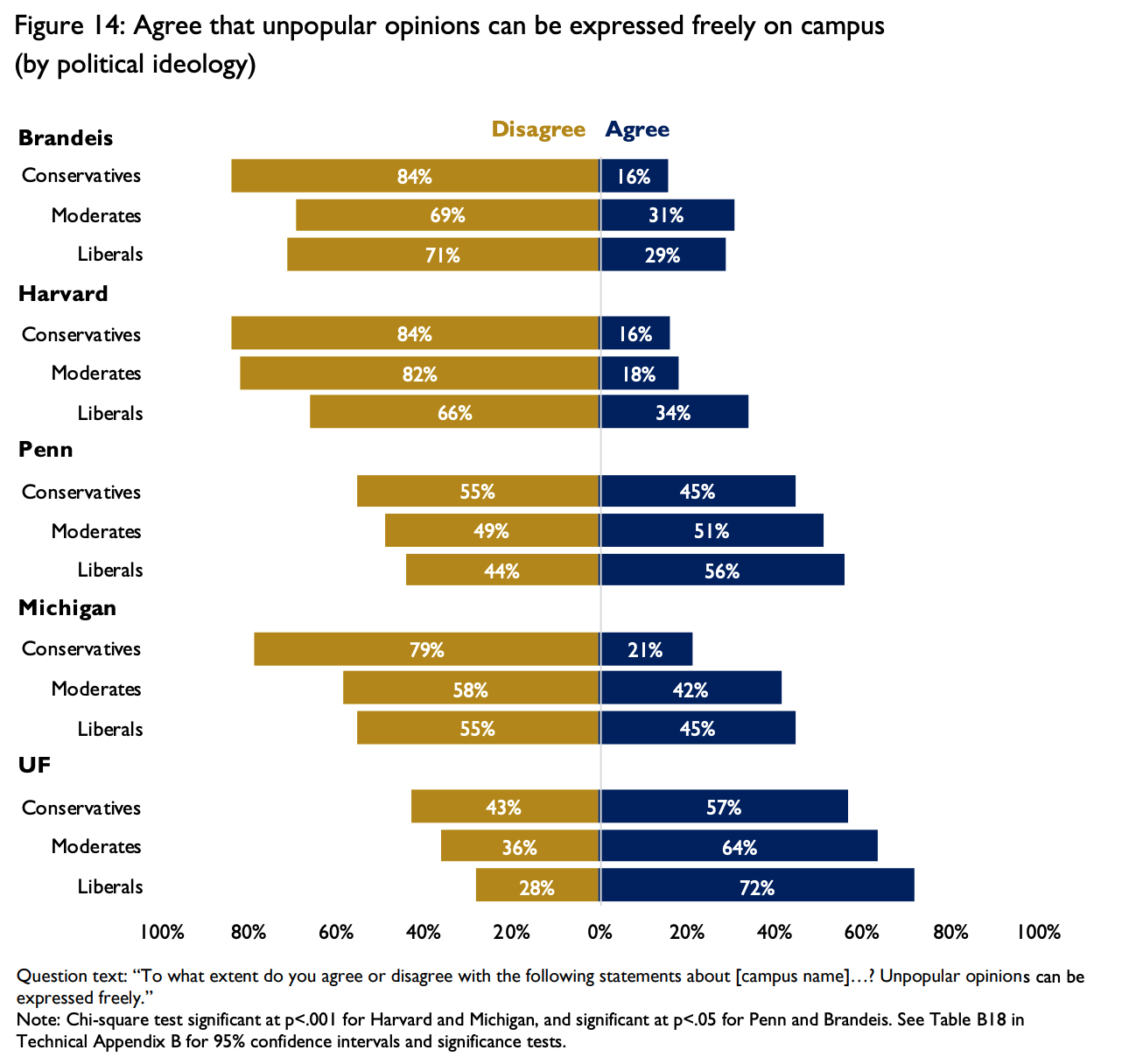 Three of the surveys asked students more specifically if they engaged in self-censorship because of the climate on campus. Of the students surveyed at Hamilton College, roughly 40% said that the political climate on campus prevents them from saying what they believe, although self-censorship was particularly more pronounced among moderate and conservative students. At Yale University, 45% of students surveyed said they “sometimes” or “often” felt intimidated sharing their beliefs in the classroom because they were different from the professor’s. When asked about sharing beliefs in the classroom that were different from their peers, 55% said they felt intimidated. Finally, students at the University of North Carolina were asked how often they kept an opinion related to a class discussion to themselves and a notable portion of students admitted to self-censorship, although student political ideology, gender, and race/ethnicity all independently impacted the frequency of self-censorship.

There is clearly considerable variation across campuses in how students perceive and experience the climate for free expression. One conclusion that emerges, even with this considerable variation, is that notable portions of students on all of these campuses report that speech is deterred. The differences between student responses on the individual campuses compared to the national survey data are also notable and help demonstrate how national survey data on college students’ attitudes can obscure variation between individual campuses. Although national data may provide a useful benchmark for an individual campus to compare themselves to, such data is likely to be fairly limited when it comes to understanding the climate for free expression on a specific campus.

These figures contrast sharply with the national data on this question collected by Knight/Gallup in 2017 and again in 2019, where over 8 in 10 students supported allowing all types of speech and expression.

The survey conducted at Smith College in the Fall of 2016 was part of an undergraduate honor’s thesis. Although the questions differed from the Knight/Gallup ones, students were asked if Smith should establish rules about the language students can use on campus to ensure reasonable debate. Among the students surveyed 56% agreed, a concerning result for a few reasons. First, the question is even more abstract than the Knight/Gallup question asked of the students at Pomona College and the University of Nebraska, making no reference to offensive or malicious expression. Second, the findings contrast with how people typically robustly support free expression in the abstract, only revealing censorious impulses when more specifics are added.

Some of the other questions asked in the 2016 Smith College survey were also asked of Smith undergraduates 16 years earlier. A cross-sectional comparison of responses to these questions reveals a striking and concerning shift in attitudes toward free expression at Smith College over the past decade and a half. In 2000, roughly 7 in 10 Smith students supported free speech when asked about it in the abstract, and close to three-quarters of them thought that “Smith College should encourage the free exchange of ideas, no matter how offensive those ideas are to some students.” In 2016, both of these figures dropped to 50%. This pattern of findings led the authors of the 2016 survey to conclude that “the finding that there is widespread support for speech rights in the abstract no longer holds for the Smith students in the 2016 survey.”

Students are intolerant of expression they perceive as malicious

In the most recent Knight/Gallup survey, a notable portion of students supported administrative censorship of expression in one or more forms. Support was strongest for censorship of racially charged views expressed with malicious intent. Student surveys conducted at Pomona College, Smith College, and at all four campuses of the University of Nebraska suggest that this is also the case on their respective campuses.

Pomona College and the University of Nebraska collaborated with Gallup and included three questions that students have been asked repeatedly since 2016. These questions ask students about whether colleges and universities should or should not be able to restrict the expression of political views that some people may find offensive; the wearing of Halloween costumes that stereotype certain racial or ethnic groups; or the use of slurs and other language that are upsetting or offensive to certain groups.

The survey conducted at Smith College in the fall of 2016 was part of an undergraduate honor’s thesis and some of the questions had also been asked of Smith undergraduates 16 years earlier. In both surveys, Smith students were asked about symbolic speech, specifically whether they allow a student to display a defaced American flag or the Confederate flag in their dorm room window. Student attitudes about allowing the display of the defaced American flag have remained relatively stable since 2000, with roughly 6 in 10 students choosing “stay” over “remove” both times the question was asked. On the other hand, attitudes about the Confederate flag have shifted markedly towards prohibiting its display with 63% choosing this option in 2016, a 40% increase compared to students surveyed 16 years earlier.

The Smith College surveys help demonstrate that non-speech expression that many current (or recent) college students likely perceive as malicious or racially charged is strongly opposed and restrictions on such expression are popular. The ability to compare the 2016 findings to previous data demonstrates that there is value in a systematic, repeated assessment of college student attitudes toward free expression that is similar to something like the General Social Survey. The cross-sectional comparison between attitudes about symbolic speech among Smith students in 2000 and 2016 suggest that over the last decade and a half, symbols related to the Confederacy are increasingly perceived as malicious.

In this case the campus-specific data and the national data are largely consistent. This suggests that the national survey data may have identified a broad trend occurring among the current cohort of college students regardless of the school they attend.

In sum, more data on college students’ attitudes toward free expression are needed at the national level and at the campus-specific level. National data are valuable. They provide benchmarks for schools to compare themselves and help identify broader trends that may be occurring among college students across the nation. Attempts to apply a single meta-narrative about free expression on campus from national surveys that aggregate the experience and perceptions of students across hundreds to thousands of campuses are flawed because such a narrative can obscure and mask the reality on any given campus.

There are thousands of colleges and universities in this country and it strains credulity to think that there is only one story about what the climate for free expression is like on campus. Providing prospective students, current students, faculty, and administrators with the most accurate information about what campus life is like and how students experience the climate for free expression on a given campus should be a priority.