FIRE > Newsdesk > Can Neutral Observers Ensure Freedom of Assembly at the University of Oregon?

The University of Oregon (UO) has struggled recently with the concept of the First Amendment. In addition to receiving a “red light” rating in FIRE’s Spotlight database due to its restrictive speech codes, the university filed five charges against a student this past summer for jokingly yelling “I hit it first” at a couple walking underneath a dormitory window. UO thus achieved the dubious distinction of managing to accuse the student of more than one conduct violation per word of an unfortunate joke. After FIRE wrote to UO’s president, the charges were dropped.

In light of this background, we at FIRE don’t quite know what to make of a recent entry on the UO Matters blog discussing a recruitment poster for the university’s “neutral observer” program. After training, students can earn $11 per hour “perform[ing] neutral observation at protests, rallies and demonstrations on the UO campus.” Benefits include helping to “create a safe space for all UO voices” and to “protect the First Amendment.” 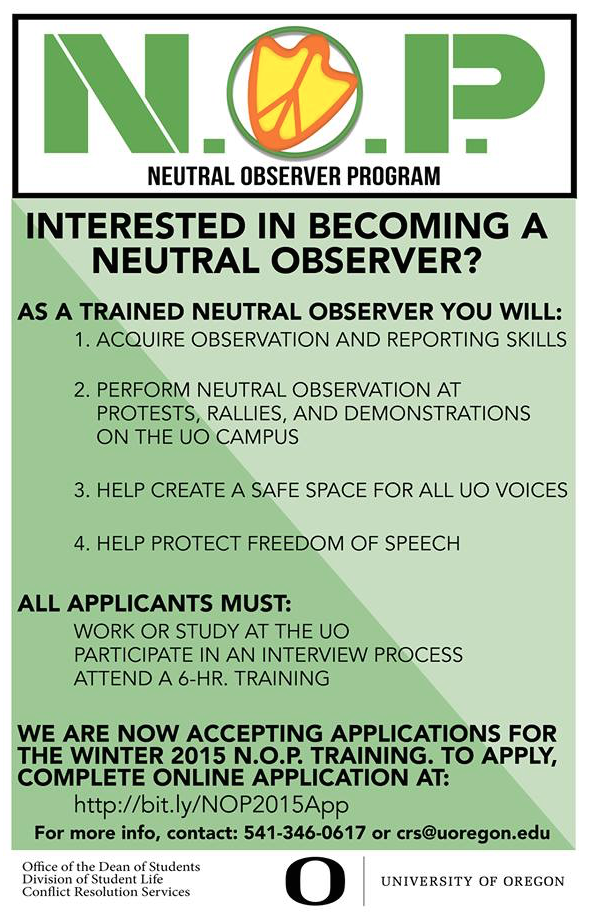 The role of neutral observers at protests can be extremely important in documenting or deterring police misconduct. I once volunteered as a legal observer for anti-war demonstrations in Washington, D.C. with the National Lawyers Guild. I ended up documenting a young man getting hit by a policeman after he asked for the officer’s badge number. I sent a narrative and photos to the National Lawyers Guild Washington Chapter as part of its ongoing efforts to combat misconduct by the D.C. police.

But there are some critical differences between that scenario and the one that UO envisions. I was volunteering with a civil rights organization and turned over evidence of government malfeasance to an independent entity. That is a far cry from being paid by the government (and, as a public university, UO is a government entity) to report back to the authorities on the activities of demonstrators. Particularly unnerving is the idea that students should act as informants to keep the campus “a safe space for all UO voices.” In FIRE’s experience, a “safe space” is usually code for a censored space where unpopular opinions are banned, whether it be silencing opposition to same sex marriage or unhiring a controversial professor. If that’s what UO has in mind, it is not only disturbing but also unconstitutional.

Nor is FIRE alone is wondering whether neutral observer programs run by universities are appropriate for college campuses. The Office of Campus Community Relations at the University of California, Davis announced a program based on the UO model last May, and it was met with skepticism. Mikael Villalobos, who heads the Diversity Education Program, said that “[t]he idea is to get a better understanding in terms of what took place so that as much information is gathered in understanding a particular situation.” Students, however, questioned whether the observers would really be neutral and worried that their presence would make protesters reluctant to speak out.

It may well be that UO has set up its neutral monitor program with the best of intentions. But if the university is truly committed to protecting First Amendment rights on campus, it should not have to hire students to protect protesters. If it fulfills its legal and moral obligation to honor the Constitution, the rest should take care of itself.