Earlier this week, the Newseum’s Great Hall of News was transformed into a comedy-themed lounge, with comedians like Gilbert Gottfried and Karith Foster roaming the room. The reason? Can We Take a Joke? was making its Washington, D.C., premiere in front of nearly 400 people at the Newseum’s Annenberg Theater. The FIRE-supported documentary explores what happens when comedy, censorship, and outrage culture collide. 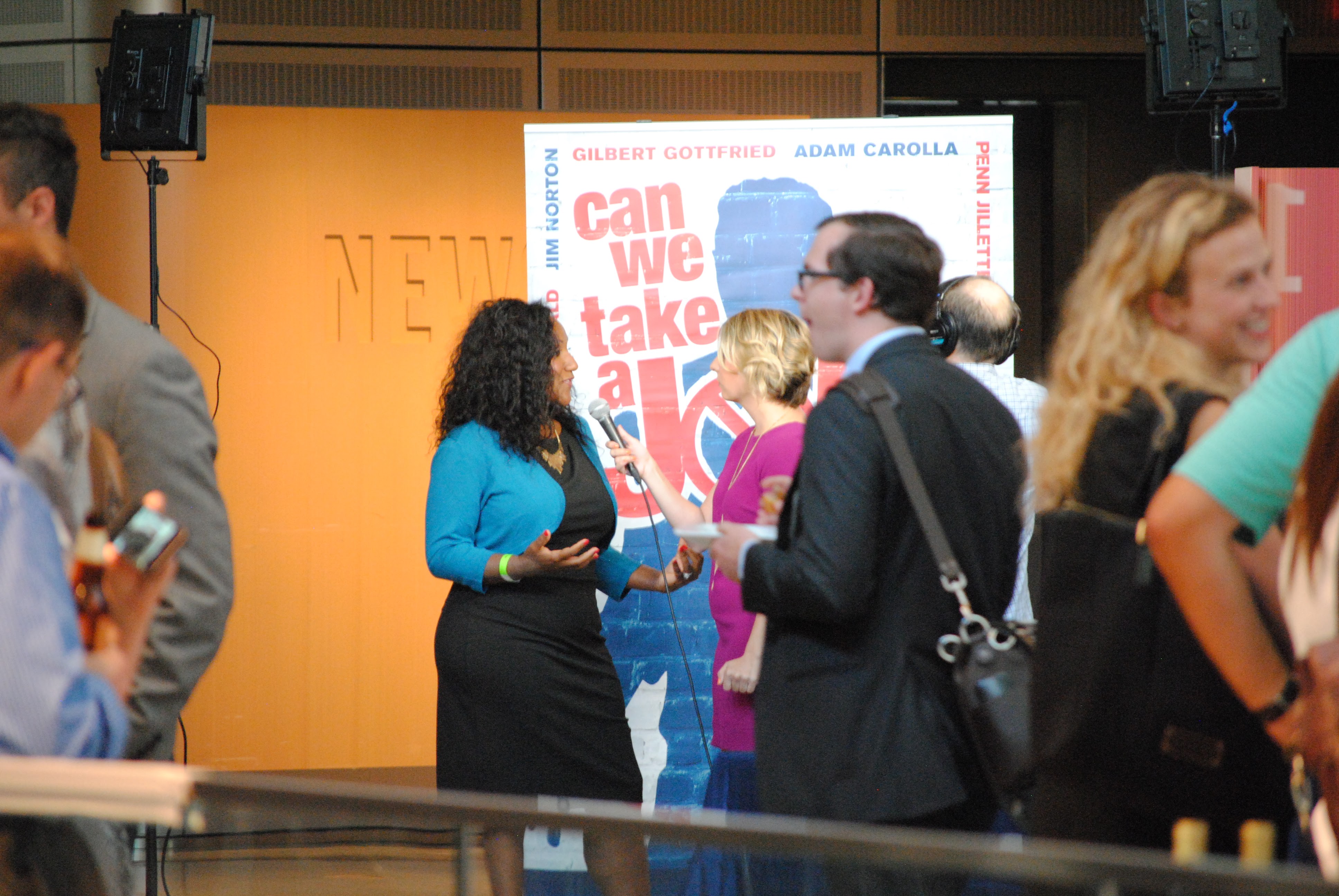 To kick off the evening, guests gathered in the Great Hall to enjoy hors d’oeuvres and drinks. In addition to catering by Wolfgang Puck, Flying Dog Brewery provided signature beverages for the evening. The brewery—long a supporter of free speech—recently won its case against the Michigan Liquor Control Commission, which tried to ban Flying Dog’s Raging Bitch IPA in the state because of the bottle’s allegedly offensive name, description, and artwork.

Before heading into the film, FIRE caught up with attendees to hear their thoughts about the night.

“I’m really looking forward to how this inspires people to be more open-minded about issues, particularly about issues that they don’t agree with,” said Cecilia Cervantes.

Emma Maier added, “The movie is very interesting because I love comedy; it’s a trade I considered going into myself for a little while.”

Excited to co-sponsor screening of @CanWeTakeaJoke. Scott Michelman (R) is on the post-film panel (@MWMacleod on L) pic.twitter.com/6edJHOhJTb

At @Newseum to see screening of “Can We Take a Joke?” Sponsored by @TheFIREorg @ACLU @ncacensorship pic.twitter.com/AjDO8jIFD0

The film examines what happens when comedians and their jokes offend others, often igniting outrage mobs. Gottfried, for example, found himself in hot water and out of a job as the voice of the Aflac duck after making jokes about the tsunami that hit Japan in 2011.

As the film shows, however, the outrage mob doesn’t just target famous comedians. Jon Ronson, the author of So You’ve Been Publicly Shamed, describes the case of Justine Sacco, who was relatively unknown until she sarcastically tweeted, “Going to Africa. Hope I don’t get AIDS. Just kidding. I’m white!” and started a Twitter storm that culminated in death threats. Or take the case of Chris Lee, a former Washington State University student whose satirical take on the film The Passion of the Christ was shouted down by heckling students attending with tickets paid for by the WSU administration.

After the screening of Can We Take a Joke?, director Ted Balaker led a panel discussion featuring Gottfried and Foster, film producer Courtney Balaker, ACLU of the Nation’s Capital Senior Staff Attorney Scott Michelman, and Lukianoff.

“I think the most important idea in this film is the idea that the remedy for speech is more speech,” said Michelman, when asked about the current climate of hostility towards comedy.

One audience member asked if other comedians were standing up for free speech, to which Foster responded:

I absolutely think my fellow comedians are frustrated actually by what they are seeing these days, by what they’re facing.

I’ve had friends who have gone to colleges and [been] told they can’t do certain jokes or talk about certain topics, and they are being told their art that they honed and crafted for many, many years is no longer acceptable.

Lukianoff and Courtney Balaker, both new parents, speculated on why this generation is motivated to censor speech.

“There might be some sort of revolution of protecting your kids from being hurt or upset and I don’t think that’s a good thing and I think that’s a dangerous thing in the long run,” said Courtney Balaker.

“I don’t think it’s just political correctness and it’s not just happening in the U.S. and we have to … go beyond First Amendment law and come up with better values,” added Lukianoff. “The idea that there is a value to being offended is something we have to remember. We also have to remember that it’s always important to know what people actually think.”

Reflecting on both the film and its screening, Lukianoff noted, “I’m glad the audience was so receptive to the film’s message because what’s happening on college campuses is also happening in society at large. Whether it’s in a stand-up comedy club or on the quad, humor allows us to talk about some of the most difficult issues people and society face. If we want a free and vibrant society, we have to keep in mind the cultural values that undergird freedom of speech and the genuine importance of remembering how to take a joke.”

FIRE, the Charles Koch Institute, the National Coalition Against Censorship, Flying Dog Brewery, and the ACLU of the Nation’s Capital sponsored the screening.