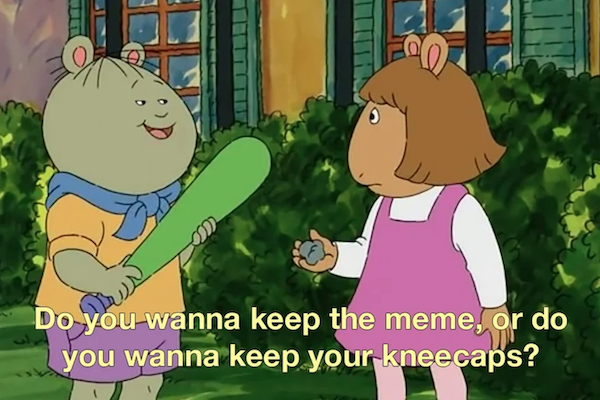 Less than a week after launching an investigation, Catholic University of America has found a student not guilty of “disorderly conduct” for posting memes criticizing the university’s Young Americans for Freedom chapter.

As FIRE reported last week, CUA launched an investigation into student Rory O’Connor on March 29, charging him with disorderly conduct for a series of posts on his Instagram story using popular internet memes to criticize a YAF event condemning transgender individuals competing in women’s sports. The post that appeared to prompt a YAF complaint to the university, and to an investigation, featured a meme from the children’s cartoon “Arthur.”

FIRE wrote CUA on April 1 explaining that because the university promises students free expression rights, it may not investigate or punish their protected expression, like O’Connor’s posts. By promising students freedom of expression, CUA guarantees protections in line with those of students at a public institution. We explained that O’Connor’s post was satirical and did not meet the strict requirements courts have established for harassment or true threats.

Although CUA did not respond to FIRE’s letter, after meeting with O’Connor yesterday, it found him “not responsible” for any “disorderly conduct.” In its decision, the university cited the satirical nature of the posts and that O’Connor did not intend for the posts to be threatening. CUA also discussed with O’Connor “how to appropriately share [his] opinion in a way that could not be misconstrued in a threatening manner.”

Although the university was right to find O’Connor not responsible, its investigation and its explanation of how O’Connor should “appropriately” share his opinion are cause for concern. Students do not have to be civil in expressing their opinions so long as their speech remains protected. CUA’s investigation of and warning to O’Connor will almost certainly create a chilling effect on O’Connor and other CUA students who may be concerned that protected expression will lead to punishment.

When facing future complaints about similarly protected expression, CUA would be wise to heed its “no cancellation policy” and dismiss the complaints without investigation. We hope to see CUA do the right thing in the future.