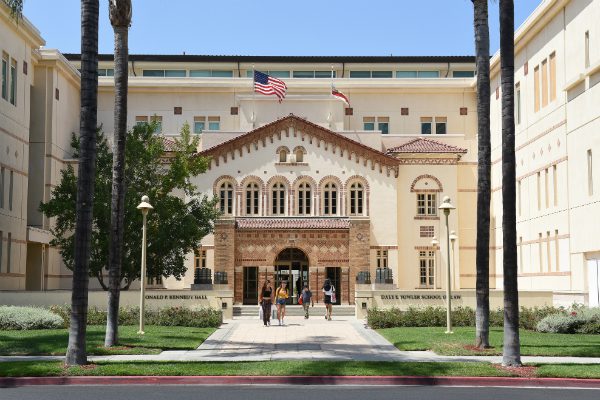 Chapman University administrators recently gave staffers at The Panther, the university’s student newspaper, an impossible choice: cover a once in a blue moon campus visit by a former president and be subject to prior review, or sit out from covering the important campus event altogether.

The journalists, led by editor Louisa Marshall, made the decision to sit it out, citing the ethics concerns of submitting their work for prior review.

Prior review — the practice of submitting content for approval before publication — not only defies journalistic ethics, but also undermines free speech values. Prior review is the first step toward prior restraint, in which the reviewed content is actually blocked from being published. That practice has been described by the Supreme Court as “the most serious and the least tolerable infringement on First Amendment rights.”

Thankfully, Chapman President Daniele Struppa apologized for the censorial move — but not before The Panther lost its opportunity to cover the event, during which President George W. Bush visited Chapman as part of business school fundraiser.

Struppa did the right thing in taking responsibility for this misstep, apologizing to The Panther, and recommitting to free expression. But Panther staff should never have had to choose between doing their jobs and submitting to censorship, particularly at a university that makes its commitment to free expression remarkably clear. Chapman was the fifth college to ever adopt the Chicago Statement — which FIRE considers the gold standard in university commitments to free expression. And Chapman has regularly held itself out as a leader in protecting free speech on campus.

President Struppa himself decried the “slippery slope of censorship” in a 2015 op-ed for The Orange County Register. Censorship is indeed a slippery slope, and one Chapman unfortunately slipped right down in this instance, according to reporting by The Panther.

At first, university officials blamed Bush’s staff for the prior review request, telling The Panther that Bush’s office had asked that, if the student newspaper covered the event, any resulting content be sent to them for approval before publication. But this turned out to be untrue; after The Panther published an editorial criticizing the prior review requirement, Bush’s chief of staff Freddy Ford called Marshall to clarify that the decision was not theirs.

“That is not something we’ve done or would ever do. We don’t play games,” Ford told The Panther. Ford further criticized the decision, noting that “any reporters who were in the press corps during (Bush’s) time in the White House would scoff at that suggestion.”

Chapman subsequently admitted the decision to insist upon prior review was its own.

“How this happened, and why, is probably not as important as the fact that I am now convinced that the university did indeed request The Panther for prior review of an article, in obvious conflict with the values we espouse,” Struppa said in his conciliatory Panther op-ed.

But how that request happened and why is also important. This is a cautionary tale of how adopting free expression commitments is just a first step. Colleges must also carefully examine their policies and practices to ensure they are in line with these commitments. After adopting these commitments, colleges should also fully train administrators, faculty, and staff on free speech principles to prevent this kind of misstep.

We also tip our hats to The Panther’s editor, Louisa Marshall, who refused to stop digging until she discovered the full story of how her paper came to face the impossibly difficult choice it was presented. Owing to The Panther’s dogged reporting, hopefully, that’s a choice no Chapman student journalist will have to face again.