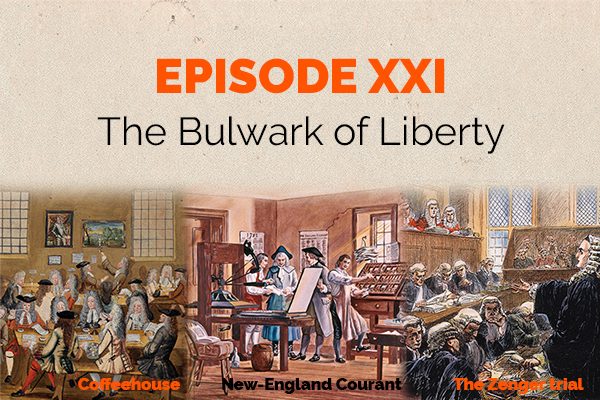 Eighteenth-century colonial America was influenced by the so-called “Glorious Revolution” in England. And nothing had a bigger impact on American attitudes toward freedom of speech than Cato’s Letters, influential essays anonymously written in the London Journal by the Radical Whigs, John Trenchard, and Thomas Gordon.

Cato’s Letters created — to borrow from the present vernacular — a powerful free speech meme that effectively went viral in the colonies: “Freedom of Speech is the great Bulwark of Liberty.” The reach of Cato’s principles grew exponentially as colonists liked, shared, and commented on them in newspapers, pamphlets, and taverns.

Despite the practical defeat of libel laws in colonial courts, legislative assemblies continued to threaten free speech. Under legislative privilege, provocative writers could be jailed and fined by their own representatives. And even some American heroes were sometimes willing to sacrifice free speech principles.

In this episode we’ll explore: