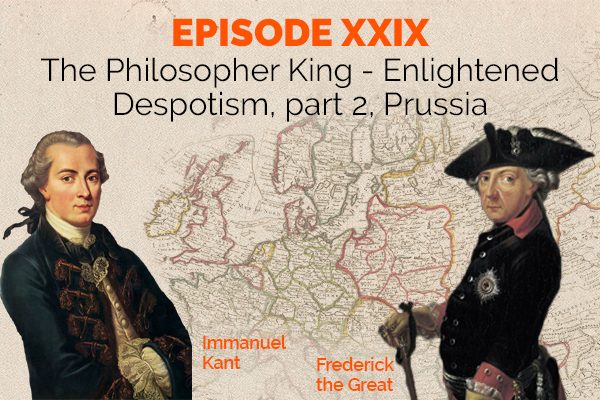 In his famous essay “What is Enlightenment?” the Prussian philosopher Immanuel Kant declared: “[E]nlightenment requires nothing but freedom … to make public use of one’s reason in all matters. Now I hear the cry from all sides: ‘Do not argue!’ … Only one ruler in the world says: ‘Argue as much as you please, but obey!’”

That ruler was Frederick the Great — and his influence was not lost on Kant.

“[T]his age is the age of enlightenment,” Kant declared. “[T]he century of Frederick.”

Frederick the Great ruled Prussia from 1740 to 1786 and launched a blitzkrieg of Enlightenment reforms impacting religious tolerance and freedom of speech. He was hailed as a philosopher king by Voltaire and gave refuge to scandalous writers who had been persecuted around Europe. But his rule was erratic, and often Absolutism would trump Enlightenment ideals.

In this episode, we cover Frederick the Great’s reign and his attitude and policies towards freedom of thought and the press. Topics include: