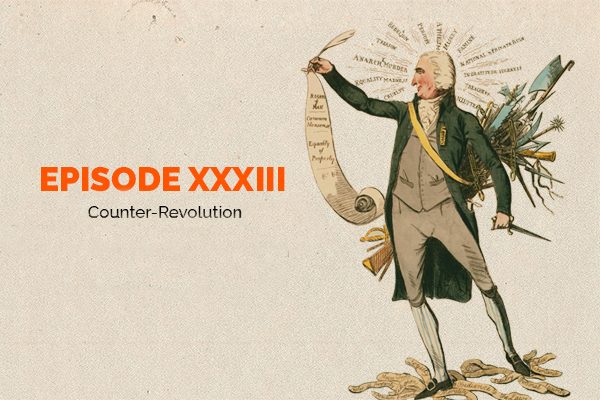 Faced with bloody terrorism, democratic Europe has often reacted with illiberal measures. The UK’s Counter-Terrorism and Border Security Act 2019 criminalizes expressing an opinion “supportive” of a proscribed organization if done in a way that is “reckless” as to whether it encourages support of terrorism. This makes it rather unnerving to jump into, for example, a Twitter thread about whether various groups are “terrorists” or “freedom fighters.”

In this episode, we’ll see how governments in the late 18th century reacted to a different kind of terror: the spread of revolutionary ideas and practices that shook the established order to the ground.

In France, this period of upheaval included the Terror, unleashed after the French Revolution spiraled out of control.

Dutch “Patriots” took their cue from the American Revolution, using freedom of speech and hard-hitting newspapers to hammer away at the Stadtholder regime. How would the supposedly liberal and tolerant Dutch react when revolutionary ideas hit fever pitch in the 1780s?

In Britain, a pamphlet war between Edmund Burke and Thomas Paine unleashed an unprecedented discussion of first principles that energized the lower classes and frightened the government. Could Britain maintain the delicate balance between order and liberty while holding at bay both revolutionary ideas and French armies?

In this episode, we will discuss: