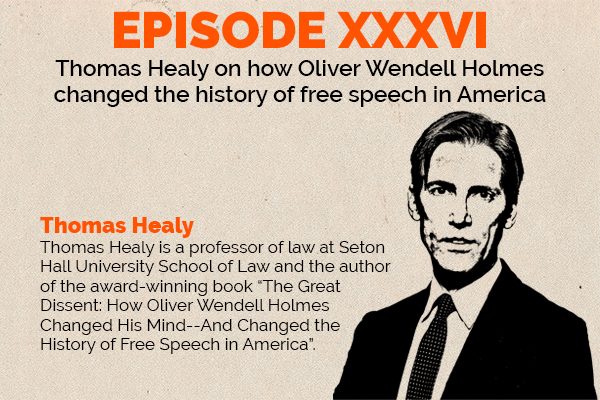 On March 4, 1801, Thomas Jefferson, the newly elected president, gave his inaugural address. Jefferson eloquently dismissed the logic behind the Sedition Act of 1798, which had sent Republican critics of then-Federalist President John Adams to prison:

We are all republicans: we are all federalists. If there be any among us who would wish to dissolve this Union, or to change its republican form, let them stand undisturbed as monuments of the safety with which error of opinion may be tolerated, where reason is left free to combat it.

Based on this strong commitment to a robust protection of free speech, one might have expected the First Amendment to play a key role in entrenching the Jeffersonian vision of free expression. But instead, it became an almost dead letter for more than a century until revived by an iconic but unlikely champion of the First Amendment: Supreme Court Justice Oliver Wendell Holmes.

In this conversation, professor Thomas Healy explains how Wendell Holmes changed his mind on free speech and laid the foundation for the current strong legal protections of the First Amendment. Healy is a professor at Seton Hall University School of Law and the author of the award-winning book “The Great Dissent: How Oliver Wendell Holmes Changed His Mind–And Changed the History of Free Speech in America.”

The conversation will explore: