We finished writing the manuscript for “The Coddling of the American Mind” in March of 2018, and the book was published that September. It was three years later — August 2021 — when we wrote the initial draft of this afterword. Most of the bad trends described in this book have gotten worse. Of the four “green shoots” we discussed in the previous chapter, only one has continued to grow: Awareness of the importance of free play and unstructured, unsupervised time, demonstrated in part by two additional states (Texas and Oklahoma) joining Utah in passing “Reasonable Childhood Independence” laws. These laws protect parents’ right to decide whether their children can play outside or stay home for a bit without supervision.[1]

As for the other three trends — social media, common-enemy identity politics, and universities committing to free inquiry —  unfortunately, there’s little progress to report. Twitter and Facebook have both attempted small reforms, such as the option of hiding the like counter. But a recent expose based on leaked information from Facebook shows these reforms made no difference, and — far more damning — their own research demonstrates that we were right in Chapter 7 when we pointed to social media, especially Instagram, as a cause of the large and sudden rise in depression and anxiety among Gen Z girls that began in 2012. Identity politics has gotten more intense and pervasive too, both on and off campus. The number of colleges that have passed some version of the Chicago Statement or earned a “green light” rating from FIRE has increased substantially, yet the fear of speaking up that students report nationally has gotten worse since 2018.[2]

It has been a tough three years — for universities, for many Western democracies, and for humanity — as we all adapted to a pandemic, an economic crisis, and political turbulence. Our goal in this afterword is to share with you nine things we have learned in the last three years so that you can better understand and respond to the trends that may already be affecting your family, school, workplace, and country.

The afterword has nine sections:

We showed in Chapter 7 that a sharp rise in teen anxiety and depression began around 2012. Unfortunately, the trends have continued unabated since 2018. Figure 14.1 is based on the same dataset as the book’s Figure 7.1 except that we have added in the three years of data that have since become available, shown to the right of the dotted line. Just in these three years of new data, the depression rate has risen by more than a third for boys (from 6.4% of all boys to 8.8%), and by nearly a fifth for girls (from 19.5% of all girls to 23%). We find similar trends in other datasets, including, tragically, data on self harm and suicide.[3] 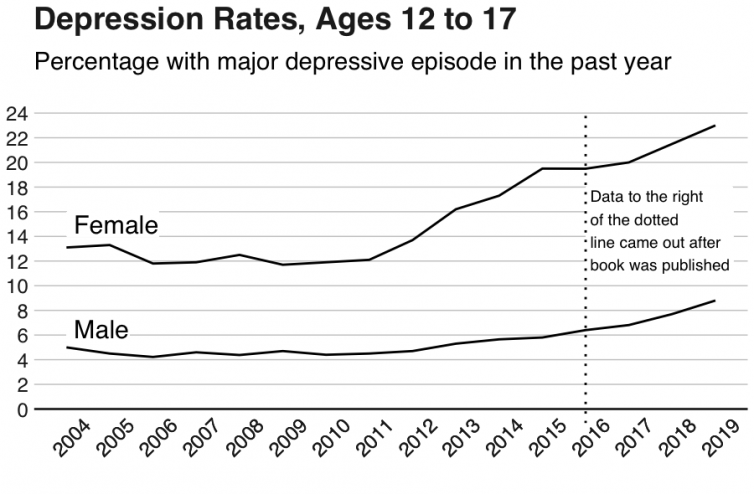 We have learned a lot more about why these trends are worsening. We were particularly enlightened by Kate Julian’s 2020 cover story in The Atlantic titled “What Happened to American Childhood?” Julian interviewed dozens of experts about the anxiety epidemic and found a surprising degree of agreement that much more therapy was needed. But it’s not just the kids who need therapy; many of the experts said it’s the parents who need to chill out.

We devoted Chapter 8 to “paranoid parenting,” but Julian identifies a causal pathway that we had not considered: As childhood anxiety rates are rising, parents are increasingly “accommodating” their children’s anxiety, rather than helping them to overcome it. She cites the example of children who don’t like to be separated from their parents within their home. In one family, the parents call out to the child so that the child always knows where they are. These parents are catering to the children’s short term needs (to shut off the anxiety now), at the expense of their long term needs (to reduce the power of things to trigger irrational anxiety). That’s pretty much the definition of “coddling.” Just as we showed in our analysis of trigger warnings (Chapter 1), the way to overcome anxiety is through gradual exposure, not by removing “triggers” from the person’s life, which only increases the power of the trigger when it is eventually encountered. (Five new studies have confirmed our conclusion that trigger warnings don’t help and sometimes hurt. [4][5])

Julian also noted the role of an economic environment in which both parents have to work, have limited time with their children, and feel that they must push their child to succeed academically. Under pressure, people often go for the quick fix. We now believe that we should add a seventh explanatory thread to our story: increased income inequality and economic precariousness over the last several decades.

While we discussed the role of increasing competition for admission to college as one cause of the decline of play (Chapter 9), we do not believe we sufficiently emphasized the intensifying rat race to remain in (let alone join) the higher economic classes. The fear of falling into a lower economic stratum helps account for the pressures parents place on kids and also for the intense working hours put in by so many parents, who end up frazzled and anxious.[6]

We have one other new finding to report. In Chapter 7 we showed that the increases in anxiety, depression, and especially self-harm were generally larger for girls than for boys. But it was recently discovered that the increase is largest in one subgroup of girls and women.

In March, 2020, the Pew Research Center surveyed nearly 12,000 Americans to examine how the country was doing with regard to mental health during the first weeks of COVID lockdowns. Zach Goldberg, a graduate student in political science at Georgia State University, dug into the dataset to examine demographic and political differences.[7] One question asked: “Has a doctor or other healthcare provider EVER told you that you have a mental health condition?” Goldberg found that people’s self-reported politics (very liberal to very conservative) correlated with their likelihood of saying “yes” to this question, with liberals more likely, but this was only true for white respondents. For whites who said they were “very conservative,” 15% of them said “yes,” but for those who said “very liberal,” agreement rose to 38%. For Black and Hispanic respondents, there was no relationship between politics and mental health, and rates were lower than the rates for whites, across the board.

Jon then obtained the Pew dataset[8] and analyzed the white respondents by age and sex. The results are shown in Figure 14.2. The combination of being white, young, liberal, and female produces by far the highest rates of assent. The majority of women in that group report having been told that they have a mental health condition. 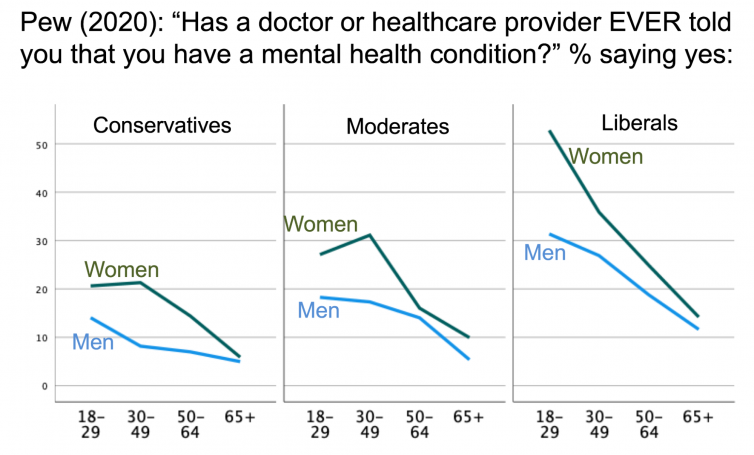 Figure 14.2. Percent saying ''yes,'' they have been told by a doctor or healthcare provider that they ''have a mental health condition.'' White respondents only. Pew Research Center.

To be sure, this survey took place at a particularly stressful moment for progressives — the first month of the pandemic and the last year of the Trump presidency.  But our hypothesis in this book has been that those who embrace the three great untruths (Fragility, Emotional Reasoning, Us-Versus-Them) most tightly will be the most likely to react to stressors with mental habits that will increase their suffering. When we look at who is leading the charge on campus for safe spaces, trigger warnings, and other components of safetyism, this demographic group seems to be overrepresented.  We have argued that the embrace of safetyism and the untruths causes anxiety and depression by making young people embrace the labels and identity of victimhood.[9] They come to believe that the world is far more hostile, dangerous, uncontrollable, and often hopeless, than it really is. That mindset about society — especially the external locus of control — has profound individual consequences.

[1] Much credit here goes to Lenore Skenazy and her organization LetGrow.org, which helped to draft and promote these bills. If you would like to start a movement in your state (or country), you can find resources at https://letgrow.org/legislative-toolkit/. Please consider supporting LetGrow.

[3] Jon teamed up with San Diego State University psychology professor Jean Twenge in January 2019 to create an open-source Google Doc that gathers all of the studies and datasets we can find that bear on the question: “Is there an increase in adolescent mood disorders, self-harm, and suicide since 2010 in the USA, UK, and other English-speaking countries?” You can find it linked at: https://www.thecoddling.com/better-mental-health.

[4] People who are randomly assigned to receive a trigger warning before viewing or reading something potentially upsetting do not then experience less anxiety; in fact, in a few studies they fared worse, compared to those who received no warning. For a summary of these studies please visit https://www.thefire.org/catching-up-with-coddling-part-two-trigger-warnings-screen-time-v-social-media-covid-19-and-the-continuing-decline-of-gen-zs-mental-health/.

[5] Two Carleton College professors surveyed the available studies and came to the same conclusion in The Chronicle of Higher Education. See Amna Khalid and Jeffrey Aaron Snyder, “The Data Is In — Trigger Warnings Don’t Work,” The Chronicle of Higher Education, Sept. 15, 2021, at
http://chronicle.com/article/the-data-is-in-trigger-warnings-dont-work.

[6] This argument is made in greater detail in Doepke & Zilbotti (2019), “Love, Money, and Parenting: How Economics Explains the Way We Raise Our Kids.”

[9] A recent study found a substantial correlation between the degree to which students report engaging in cognitive distortions (especially emotional reasoning) and the degree to which they endorse safetyism beliefs (e.g., “Intentions don’t matter; only the emotional impact of those words on the listener matters.”) Students reporting higher levels of cognitive distortions also reported being more lonely and less resilient. This finding is consistent with our claim that the Great Untruths are harmful to those who embrace them. See Celniker, J., Ringel, M., Nelson, K., & Ditto, P. H. (2021, April 28). Correlates of “Coddling”: Cognitive distortions predict safetyism-inspired beliefs, belief that words can harm, and trigger warning endorsement in college students. https://doi.org/10.31234/osf.io/5g7nc.