FIRE > Newsdesk > College Students Should Be Scared to Celebrate Halloween

If you’re a college student gearing up for Halloween tomorrow, we hope you’re scared. Not of the usual frightful fare—ghosts, haunted houses, terrible people who put their babies in pumpkins—but of the fact that your costume could get you in serious trouble.

If this warning sounds freakishly familiar, it is.

Over the years, FIRE has amassed a veritable witches’ brew of horror stories in which colleges and universities demand that students refrain from wearing “offensive” costumes.

Public institutions violate the First Amendment’s guarantee of free expression when they do so. Courts have held that offensive—even racist—costumes and party themes are expressive conduct protected by the Constitution. (See Iota Xi Chapter of Sigma Chi Fraternity v. George Mason University, 993 F.2d 386 (4th Cir. 1993), which held a university could not punish a fraternity for an “ugly woman” contest that the university said created a “hostile learning environment.”) Private colleges, while not beholden to the First Amendment, often breach their own promises to support free speech on campus.

As we’ve said before, universities are certainly within their rights to ask students to carefully consider costume choices, but threatening students with punishment goes too far. However, like some kind of recurring nightmare, these scare tactics materialize time and again.

Earlier this month, Wesleyan University administrators peppered campus with flyers asking students to consider whether their costume was “offensive.” Inside Higher Ed got its hands on one: The poster purports to “encourage” students to care for one another by asking whether their costumes “mock cultural or religious symbols such as dreadlocks, headdresses, afros, bindis, etc.,” “attempt to represent an entire culture or ethnicity,” or “trivialize human suffering, oppression, and marginalization such as portraying a person who is homeless, imprisoned, a person with disabilities, or a person with mental illness.”

Suggesting students respect each other may not seem sinister. But FIRE’s experience demonstrates these friendly reminders are anything but.

Wesleyan is a private university not bound by the First Amendment, but it does expressly promise students the right to “[f]reedom of assembly, speech, [and] belief.” However, the university’s other policies could prompt punishment for protected expressive conduct. For example, Wesleyan has a troublingly vague ban on “discriminatory harassment,” prohibiting even “unintentional forms of harassment” (emphasis added). Wesleyan also grants students “the right to be protected against actions that may be harmful to [their] emotional stability.”

In other words, despite the flyer’s friendly tone, unintentionally hurting someone’s feelings with a Halloween costume could actually constitute a punishable offense at Wesleyan.

And Wesleyan is by no means alone. Campus Reform reports the poster’s wording—as evidenced by a disclaimer at the bottom—was “inspired by the work of Hampshire College’s Community Advocacy Department.” Their poster, in turn, was informed by Northwestern University’s similar admonishment to students a few years back. (Northwestern, according to its handbook, is a place “where freedom of expression is uncompromisingly protected,” though FIRE knows better than to take their word for it.)

Now, you don’t have to dust the cobwebs off piles of student handbooks to imagine ways that speech codes might, someday, be abused to stifle speech on campus. We’ve got plenty of hair-raising examples from years past. It’s kind of like the neighborhood kid who won’t just “TAKE ONE” from that unattended candy bowl on your porch. Someone always crosses the line.

This year, the award goes to the jack-o-lanterns at Rhodes College who, earlier this week, explicitly threatened disciplinary action for students daring to choose the wrong outfit tomorrow: 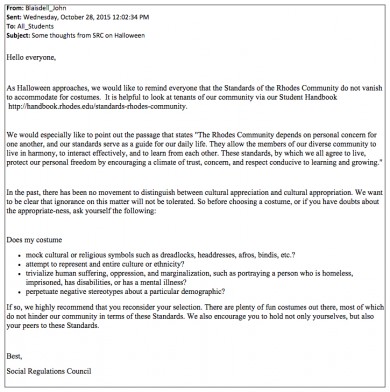 As you can see, offensive costumes “will not be tolerated.”

But that begs the question: What if students did use these offensiveness checklists to scrutinize their costumes? Would they be in the clear?

That answer is a terrifying and frustrating “No.”

There is no objective standard for what is “offensive.” Thus, students can never know with certainty what might subjectively offend another member of the campus community. Under this rationale, even the most innocuous costumes could offend a hyper-sensitive student: Witches are “ageist and sexist,” ghosts “mock the dead,” jailbird costumes “trivialize the traumatic experience” of students with a parent or relative in prison. My husband (don’t tell him I told you this) had a bad pony ride incident when he was three and still actively avoids petting zoos. If he were a Wesleyan student, he might have a legitimate claim against someone in a horse outfit for undermining his “emotional stability.”

The consequences of this “offendedness sweepstakes”—where students claim the right to censor any expression they subjectively dislike—was on display earlier this semester as students at UCLA “demanded a response” from the administration to a “Kanye Western” theme party. Caving to student demands, UCLA temporarily suspended a fraternity and sorority for hosting the party before even completing an investigation into allegations that some attendees wore blackface—an investigation that turned up no evidence that anyone did. Rather, the photos that created the uproar showed sorority sisters dressed as miners, with soot-smeared cheeks, making reference to Kanye West’s song, “Gold Digger.”

Investigations of Halloween costumes—even where they ultimately exonerate the accused—chill protected speech on campus.

That’s why encouraging students to check themselves on Halloween—and backing that encouragement up with threats of disciplinary action—might just be the spookiest thing you’ll encounter this season.