FIRE > Newsdesk > Constitution Day 2014: What a Difference a Year Makes

September 17, 2013—last year’s Constitution Day—turned out to be a dark moment in the history of free speech on America’s campuses. That was the day Robert Van Tuinen was stopped from handing out Constitutions on the campus of Modesto Junior College (MJC) in California. He had neglected to sign up to use the school’s tiny “free speech area,” the only place that a student was allowed to hand out literature. On the same day, an administrator at Citrus College (also in California) told student Vinny Sinapi-Riddle that he could be removed from campus for seeking another student’s signature on a petition against National Security Agency spying. Vinny, too, was outside that school’s free speech zone.

And those are only the instances of censorship that we know about. One in six colleges and universities restrict free expression to tiny areas of campus. Who knows how many students could not exercise their First Amendment rights because the free speech zone was in use or they didn’t want to deal with the bureaucracy, or they simply assumed that they were not allowed to have their say?

But, to paraphrase the song What a Difference a Day Makes (and with apologies to Dinah Washington):

It’s heaven when you find free speech on your menu

What a difference a year made

And the difference is you.

As Torch readers know well, Van Tuinen sued MJC with FIRE’s help. As part of the settlement, the college completely reformed its speech policies. FIRE produced an excellent video about Van Tuinen’s quest to restore free speech to his campus, with the help of some attorneys and professors.

The result? Yesterday, Robert and his colleagues in the college’s Young Americans for Liberty chapter were able to hand out copies of the Constitution, engage their fellow students, and collect a wide variety of viewpoints on a Free Speech Wall. 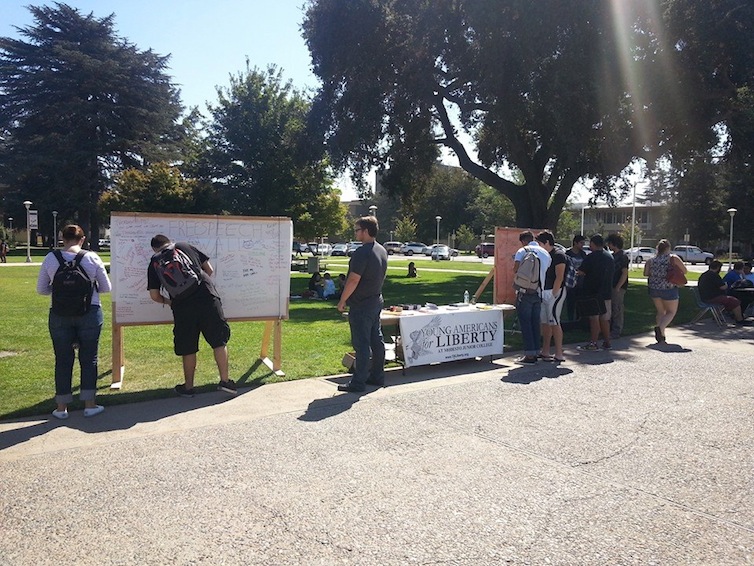 Vinny Sinapi-Riddle is currently engaged in ongoing litigation coordinated by FIRE against Citrus College, but last week the college agreed to a moratorium on enforcing its free speech zone restrictions. It also shortened its process for approving student activity requests from two weeks to one day and suspended its harassment policy. As a result, Vinny and his fellow YAL members were able to increase awareness about “the Constitution’s birthday” and a range of other issues on campus yesterday. This video shows what a college campus should look like: a place alive with the exchange of ideas where students can engage with each other without worrying about “being hassled” (to quote Vinny) for breaking some unconstitutional administrative rule.

Another Stand Up For Speech plaintiff, Merritt Burch, sent a photo from the Constitution Day celebration at University of Hawaii at Hilo with the note “We had an awesome Constitution Day today that thankfully wasn’t in the muddy free speech zone!” Last year Merritt was stopped from handing out Constitutions at a student organization fair (although not on Constitution Day). She was also told that she had to protest the NSA in a remote free speech zone because “it’s not the 60s any more.” With FIRE’s help, Merritt and a fellow student, Anthony Vizzone, sued, and the university suspended its unconstitutional policies shortly thereafter. 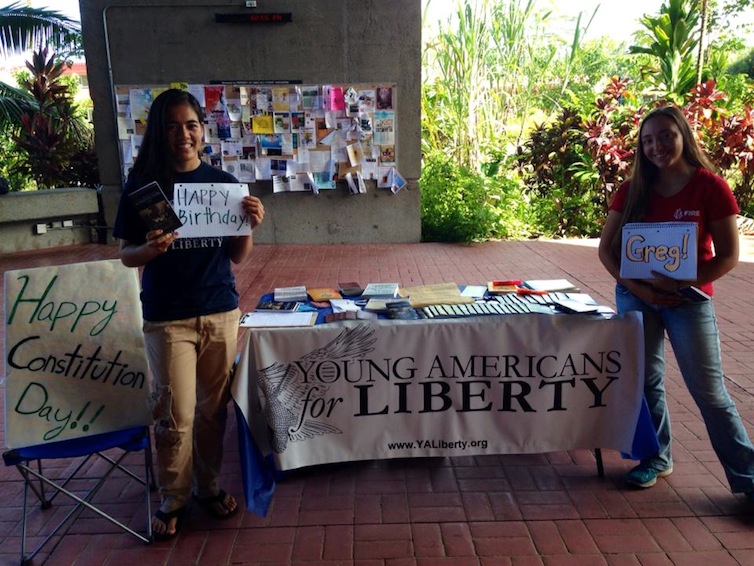 FIRE staffers experience a range of emotions on a day-to-day basis: disbelief at the latest report of censorship, and frustration that nearly 60 percent of schools in our Spotlight database have unconstitutional speech policies, to name just two. And there is still much work to be done, as this report of Constitution Day censorship from Pennsylvania State University demonstrates. But yesterday we experienced something different: simple happiness at seeing the successful Constitution Day festivities that we had helped make possible. We were not alone. As Nan Austin reported in The Modesto Bee, one student using the “free speech wall” display at Modesto Junior College “drew a happy face and wrote: ‘Change starts with us,’” adding “I feel like happiness kind of moves you. It’s contagious.” Van Tuinen himself told the Bee, “Everybody was happy to present their opinions.”

As the song says, the difference is you. “You” meaning students and faculty who have joined FIRE’s Stand Up For Speech Litigation Project and have courageously sued their schools with tremendous results. “You” meaning members of our FIRE Student Network who promote First Amendment ideals on campuses across the country. “You” meaning our crack legal team at Davis Wright Tremaine. “You” meaning donors and Torch readers. “You” meaning administrators who work with us to change their institutions’ policies to a “green light” rating. And “you” meaning everyone who works to make college campuses places where students can truly “think the unthinkable, discuss the unmentionable, and challenge the unchallengeable,” in the words of Yale University’s Woodward Report.

Please watch the video and enjoy the moment—just this once, the work can wait.