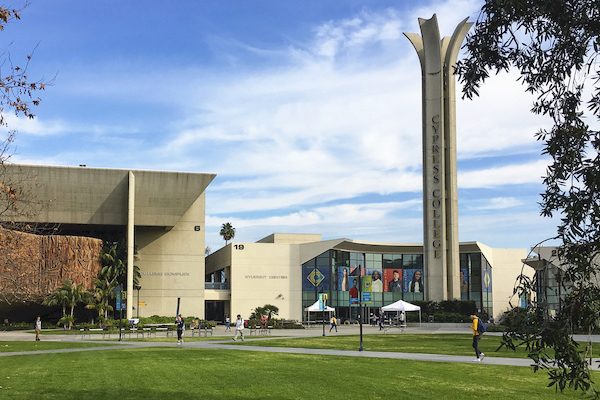 In April, a Cypress College student recorded a tense exchange over Zoom with his adjunct professor who peppered him with questions about his presentation, an exercise in persuasive argument for a communications class. As the clip went viral — fueled by anger over the professor’s cross-examination of the student’s discussion of police as “heroes” — the student, who had provided the college’s recording of the class to a journalist, said that he did not want the professor identified or punished.

Others who viewed the viral clip did not agree. As FIRE reported in May, the intense backlash on social media against adjunct instructor Faryha Salim precipitated Cypress College’s decision to place Salim on administrative leave. In response to the public anger, Cypress College released a statement focused on Salim, announcing that Salim (who had not yet been identified) would be “taking a leave of absence” from the college and that administrators were “reviewing” the exchange “and will address it fully in the coming days.” Privately, the college told Salim that unspecified “safety” concerns prompted the college to remove Salim from teaching — a class Salim taught online, from home. Yet that did not mollify the public anger, and soon threats — real safety concerns — mounted.

Now, documents uncovered through FIRE’s open records request reveal both the nature of the public response — which ranged from polite criticism to angry calls for Salim’s termination to racist threats of violence — and the inappropriate nature of the college’s decision to place Salim on leave, rewarding critics and capitulating to a “heckler’s veto.”

An angry public responds to Salim’s comments about police

In response to the viral video, upset members of the public, including parents and alumni, contacted the college.

Some calls were polite, if not always credible. One alumna left a voicemail stating that Salim’s comments embarrassed her, while a caller claiming to be a parent planning to “relocate to California” said he needed more information about the college’s position on critical race theory and supporting the police before he would send his son to Cypress College. Another woman reached out solely to ask for the college president’s contact information. Another called the public safety office to find out Salim’s opinion about the “public safety folks” who work at the college. And another alumna asked the college to identify Salim (who had not yet been named) and for the college’s position on Salim’s comments.

Public anger — whether manifested in polite phone calls, threats of violence, or violence itself — cannot dictate who can speak or what may be said at institutions of higher education.

Some messages, however, were far less civil, with one parent saying he would no longer send his daughter to the college because Cypress College is “so leftist,” and telling the college to “stick it up your ass.” Another individual left a voicemail screaming racial slurs, insulting Salim, and shouting “fire that bitch.” Others tweeted that Salim’s house should be broken into, as the police would not be called. And someone claiming to be a hacker said they would be “forking your yard and TP’ing your trees” (though that remark was posted in reply to a Twitter user who was neither Salim nor Cypress College). Another individual directly messaged the college on Twitter, saying “You’re not getting off with this.”

Others made threats of violence, even after Cypress College placed Salim on administrative leave. The college received an angry voicemail stating that Salim “needs a punch in the fucking face, which I would happily deliver” and that the college should “just wait until you see what I can do to you.”

On May 3, the college received an email from someone claiming to be part of the “new Klan,” promising violence: 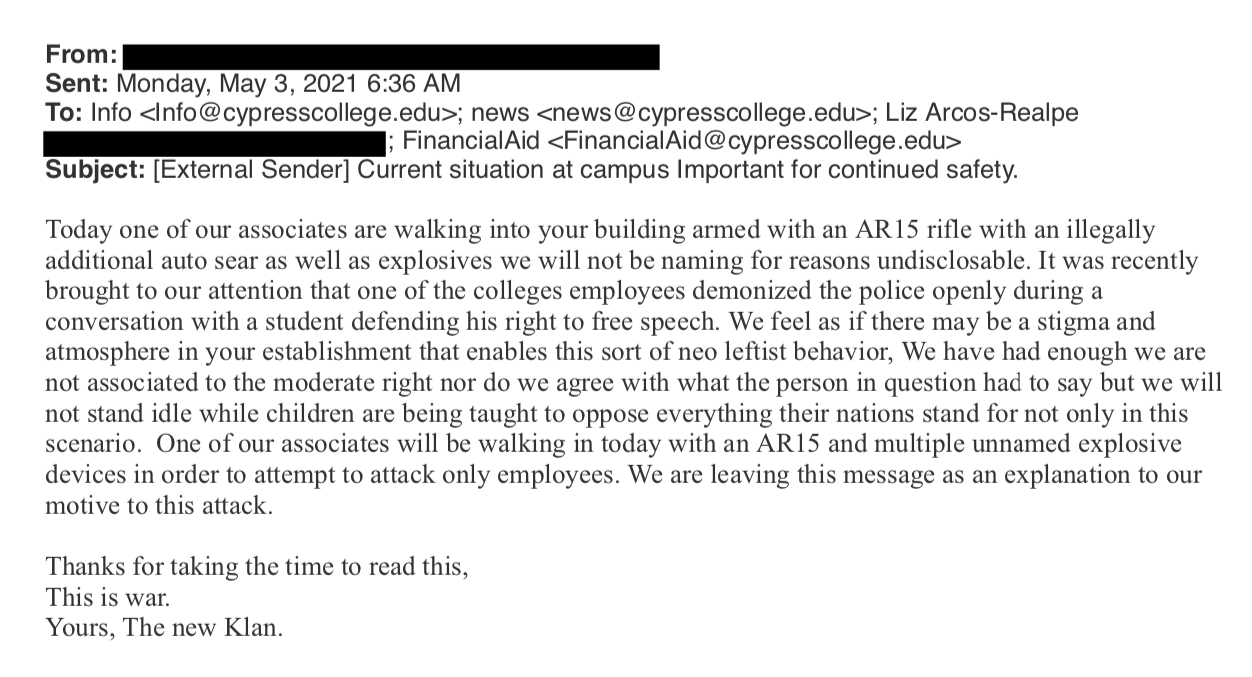 That understandably prompted the college to shutter its campus for the day. (One college safety officer said he understood the concern, but was “not concerned about an actual threat” because he felt that the email “looks like it was written by an adolescent.”)

Public anger — whether manifested in polite phone calls, threats of violence, or violence itself — cannot dictate who can speak or what may be said at institutions of higher education. When institutions take action against an unpopular speaker in order to quell anger or mitigate threats, they effectuate the “heckler’s veto” — and, in doing so, often violate the First Amendment. As the Supreme Court held in Forsyth County v. Nationalist Movement, the First Amendment protects “[t]hose wishing to express views unpopular with bottle throwers,” as speech cannot “be punished or banned, simply because it might offend a hostile mob.”

Cypress College did exactly that. Although there’s no doubt that it was justified in shuttering its campus after receiving an explicit threat of imminent violence, its actions against Salim — imposing an involuntary leave of absence and announcing so publicly, even though Salim was teaching from home — did not further those legitimate safety interests. Instead, the actions against Salim were intended to pacify those making threats. The college’s own statement said as much, attributing the “decision to remove” Salim to “protect her safety, maintain her confidentiality, and mitigate attacks from those who sought to threaten her as well as the students in her class.” (Salim uses they/their pronouns.)

This was not the proper response from Cypress College. While authorities obviously do not need to stand by in the face of potential violence, they can’t take action against the speaker unless they’ve first tried other ways of preventing the violence. As the U.S. Court of Appeals for the Sixth Circuit said in Bible Believers v. Wayne County (2015), authorities’ actions must be the “least restrictive means for coping with a crowd’s hostile reaction.” In other words, silencing a speaker is the “last resort […] before removing the speaker due to safety concerns, and thereby permanently cutting off his speech.” Cypress College, as a public entity bound by the First Amendment, had an obligation to “first make bona fide efforts to protect the speaker from the crowd’s hostility by other, less restrictive means.”

When colleges and universities allow detractors to control the institution’s reaction to speech, it encourages bad actors from across the political spectrum to continue to try to shut down speakers.

Cypress College has an obligation to withstand criticism, lest public anger at speech be the basis on which students and faculty are allowed to teach or study. By removing Salim from the classroom, Cypress College sided with Salim’s critics. In doing so, it not only failed to uphold the First Amendment rights of its faculty, but also invited future threats — against Salim or others — by showing that they work. Indeed, the threats Cypress College received were issued after Salim was removed from the classroom. Worse, Salim’s removal from the classroom appears to have been predicated solely on offensive tweets and rude voicemails — but not threats, which only came later. In other words, while it was perfectly reasonable to evacuate a campus and send everyone home due to threats of gun violence, as Cypress College did, there’s no apparent safety rationale to remove a professor who was already at home.

Even if Cypress College had received these messages prior to removing Salim from the classroom, it is the responsibility of the college to protect Salim’s expressive rights — as disruption, or the threat of disruption, is a tried and true method for shutting down speech. The college did not protect Salim, and the consequences have been felt: Salim refused to teach summer classes at the college because of the college’s lack of public and private support of academic freedom.

As the U.S. Court of Appeals for the Ninth Circuit explained in Collins v. Jordan (1996), the college’s actions here are likely unlawful:

Those who contacted the college are free to disagree with Salim — publicly or privately — and the college itself is also free to disagree and make public-facing statements expressing as much. But Cypress may not punish Salim for protected expression. When colleges and universities allow detractors to control the institution’s reaction to speech, it encourages bad actors from across the political spectrum to continue to try to shut down speakers.

FIRE’s public records request may not have provided us with all of the information here.

Troublingly, this could be by design.

JoAnna Schilling, Cypress College’s president, told her colleagues in an email that the “concern is that everything that goes in writing has the potential to be shared with the media.” So instead, the college hosted a day of Zoom meetings, like a “war room” to “facilitate conversations.” Unfortunately, we will never know what was said in the meeting, as the college did not record it. This is an unfortunate — and seemingly deliberate — attempt to skirt transparency from a taxpayer-funded institution.

The problem with granting heckler’s vetoes over speech is that it incentivizes threats of disruption or violence from the least tolerant members of our society.

The incident raises serious concerns over how committed Cypress College is to protecting its faculty’s academic rights. FIRE is in contact with Salim, who was unaware of the threats the college assertedly relied upon in placing Salim on administrative leave. Regardless of backlash or threats, however, the college is obligated to protect Salim’s First Amendment rights. Instead, it buckled to and incentivized a heckler’s veto.

Unfortunately, this situation is not unique.

In 2014, FIRE president and CEO Greg Lukianoff wrote about how the heckler’s veto evolved from “attempts by angry members of a crowd to shut down a public speech” to “any occasion when a minority of people try to shut down expression through inappropriate means because they dislike the speech in question.” He summarized why giving into demands to cancel classes or speakers only creates a perpetuating cycle:

The problem with granting heckler’s vetoes over speech is that it incentivizes threats of disruption or violence from the least tolerant members of our society. As the Supreme Court astutely observed, it is perverse to protect speech in general but then refuse to protect that speech which is “unpopular with bottle throwers.” In doing so, you pretty much guarantee that there will be a lot more bottles to be thrown. After all, they know it works!

Several high-profile examples in recent history demonstrate how heckler’s vetoes do not align with a particular political allegiance. At Evergreen State College in 2017, professor Bret Weinstein was told to stay off campus by school police out of concerns for the school’s ability to protect him from an angry mob of students. That same year at the University of California, Berkeley, violent protests wracked campus and forced the cancellations of appearances by provocateur Milo Yiannopoulos and right-wing commentator Ann Coulter, who were invited by the school’s College Republicans. And in 2019, threats from a right-wing group caused Portland State University police to cancel a meeting of a student socialist group on campus.

These are not the outcomes the First Amendment requires. As the Sixth Circuit said in Bible Believers:

In a balance between two important interests—free speech on one hand, and the state’s power to maintain the peace on the other—the scale is heavily weighted in favor of the First Amendment.

As FIRE has argued before, colleges and universities must take a stand against the heckler’s veto to protect student and faculty First Amendment rights. The Supreme Court has clearly and often held that institutions of higher education must prevent heckler’s vetoes to fulfill their obligation to protect expressive rights on campus. Cypress College fell short of that here, and must make clear that it will not allow hecklers to dictate the rights of students and faculty on campus.

FIRE urges Cypress College to reassure its community that it will protect student and faculty expressive rights, even when there is blowback.