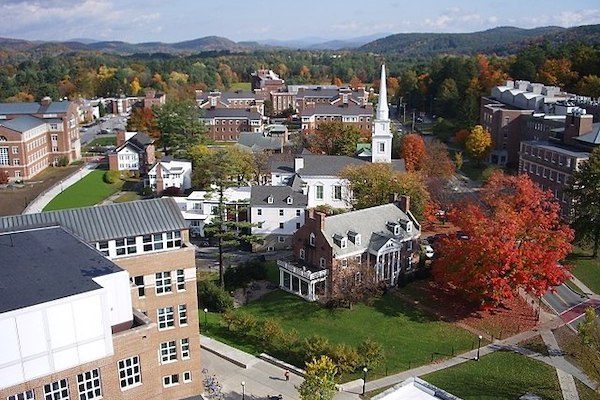 Last week, FIRE asked Dartmouth College for transparency after it cited unspecified “information” from local law enforcement to justify unilaterally moving an in-person appearance by conservative journalist Andy Ngo and activist Gabriel Nadales to an online-only broadcast. On Friday, given the opportunity to shed light on the nature of that “information” or what drove administrators’ decisions, Dartmouth instead answered with a non-response that screamed “Nothing to see here. Pay no attention to the man behind the curtain!” So, let’s take a peek!

The event, which was to take place Jan. 20, was hosted by the college’s chapters of the College Republicans, Turning Point USA, and Network of Enlightened Women. Dartmouth canceled the in-person event and moved it online just hours before its scheduled start, citing “concerning information” from the Hanover Police Department. What’s interesting is that protesters did not show up to the event, and the university confirmed there was no “bomb threat,” as had been alluded to in previous reports. This leaves us wondering: What information was “concerning” enough to cancel the event?

On Jan. 26, FIRE wrote to Dartmouth for more information about why it canceled the event and what steps it took to avoid cancellation. Because cancellation, we noted, allows a heckler’s veto to prevail, and curtailing speaking appearances in reaction to threats of violence only incentivizes the heckler’s veto in the future.

On Friday, Dartmouth responded to FIRE’s letter, stating, in part:

Dartmouth prizes and defends the right to free speech. Although we were deeply concerned about the credible threats to participant safety shared by local law enforcement shortly before the Extremism in America event was scheduled to begin, we were delighted that the event took place, proceeding safely online. Regardless of the venue—live or online—Dartmouth is committed to the protection of freedom of speech. I am pleased that, in this case, all of those in attendance were free to exercise that right.

This non-response does not begin to address FIRE’s concerns. As we previously explained, the vigilant protection of civil liberties requires more than taking the authorities’ word that they had legitimate safety concerns when they took action against an unpopular speaker:

Dartmouth citing “concerning information” for its actions is not enough. It is a vague statement that tells us — or, importantly, the sponsoring organizations — nothing about the nature or scope of the risk or why it was allegedly sufficient to overwhelm the significant security arrangements already in place. Civil liberties require more than blind trust in authorities’ incantation of safety. That is why FIRE wrote Dartmouth today demanding answers on what exactly led to the in-person event’s cancellation and whether alternative options were considered or taken prior to moving it online.

.@Dartmouth forced @MrAndyNgo‘s event to go online only — despite protesters never showing up.

Dartmouth’s non-response also bizarrely pats itself on the back for ensuring that “all of those in attendance” — again, at an event with nobody in attendance because Dartmouth moved it online — were able to exercise their free speech rights. Even if what Dartmouth meant was that it graciously allowed Ngo to speak to a camera, equating online events to in-person events misses the point: Burdening speech because of threats frustrates the ability of the speaker, the intended audience, and the speaker’s critics to meaningfully engage in discussion. In-person events allow for collaboration and communication among speakers, their fans, and their detractors, while online events are isolated by their very nature. Moving an event online stifles expression and communication between the speaker and the audience.

While we appreciate that Dartmouth says it “prizes and defends the right to free speech,” actions speak louder than words. In this case, the college’s actions departed from its own promises of free expression, burdening a speaker ostensibly to protect his safety. Dartmouth owes its students and the public more than “take our word for it.” Absent that, Dartmouth’s actions indicate that when detractors express distaste for upcoming events, the university’s promises of free expression go out the window.

FIRE goes to the source

We had a feeling that Dartmouth would not provide more helpful information, so we also asked the Hanover Police Department — the police department that Dartmouth says provided the “information” that justified moving the event online — for an explanation.

In our letter to Hanover Chief of Police Charlie Dennis, we explained the importance of free expression on campus and how those rights are endangered in situations such as this:

Canceling in-person events because the speaker wishes to air “views unpopular with bottle throwers” not only silences a current speaker, but invites future threats to the safety and expressive rights of students and faculty. Once an institution succumbs to the heckler’s veto, hecklers are incentivized to threaten violence to shut down unpopular speech. We are sure you will agree that we must remain vigilant against such threats, as they would imperil the ability of students and faculty to engage in the robust exchange of ideas which may be pointedly objectionable to others.

We also explained to Chief Dennis why it is so important that the department make transparent all information it sent to Dartmouth in the hours leading up to the scheduled Ngo event. As we said in our letter:

Providing transparency here will help the public evaluate whether Dartmouth’s decisions were prudent under the circumstances, and whether our institutions are appropriately responding to threats of violence intended to silence unpopular or controversial speakers.

In an effort to learn all pertinent information, FIRE also sent public records requests to the Lebanon City Police Department and the New Hampshire Department of Safety, as well as the Hanover Police Department, for all communications related to the Ngo event. We will keep readers posted as to the departments’ responses.

Dartmouth’s decision to cancel the in-person Ngo event and move it to an online-only format may not seem like a big deal to some, especially when the university invoked public safety interests, and claims to have relied on law enforcement guidance. However, even when authorities deem public safety concerns legitimate, they must take the least restrictive step to remedy that concern. You can’t silence a speaker to appease a literal mob — and, in this case, there are signs the mob never even materialized. Because of the college’s lack of transparency, it is not clear whether Dartmouth’s actions were the least restrictive option to address the safety need — which, again, Dartmouth refuses to identify.

We again call on Dartmouth to make clear what information led to cancellation of the in-person Ngo event. And if the college again refuses to provide that information, we encourage the Hanover Police Department to make it transparent. We will update readers as we learn more.