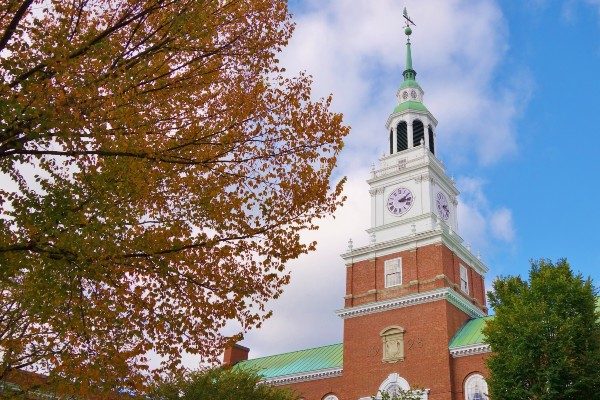 Dartmouth College took a big step forward for free speech by revising a severely restrictive technology use policy this year. However, the progress will amount to a classic “one step forward, two steps back” if Dartmouth doesn’t revise its student harassment policies in accordance with the Department of Education’s recent Title IX regulations.

“Speech Code of the Month” revision

In January 2018, FIRE highlighted Dartmouth’s “Acceptable Use Policy” as Speech Code of the Month, our monthly designation of a particularly restrictive policy from our Spotlight database of campus speech codes.

The policy banned students from posting or transmitting online content deemed “offensive” or “hateful” — broad terms that could be wielded to suppress just about any disfavored expression.

With regard to harassment policies, universities don’t have years to get it right.

In fact, the policy was so undeniably overbroad that Dartmouth’s administration publicly agreed to address our concerns. Speaking with the Valley News in September 2018, Dartmouth vice president and chief information officer Mitchel Davis explained that the college would adopt a new policy, and responded to FIRE’s analysis by saying: “They’re right about that,” and “We’ll be changing that language.”

Nearly two years after that statement, the last vestiges of the provision banning offensive and hateful posts were finally removed from Dartmouth’s Acceptable Use Policy webpage.

It was Dartmouth’s only “red light” policy (a rating reserved for clearly and substantially restrictive policies), so the revision improved Dartmouth to an overall “yellow light” rating (awarded to policies that either restrict a narrower area of speech or place vague restrictions on expression). Dartmouth has three yellow light policies remaining: two harassment policies and an incident reporting policy.

FIRE is used to playing the long game, watching for incremental policy changes to go through as we chip away at restrictive speech codes at schools across the nation. But with regard to harassment policies, universities don’t have years to get it right. After all, schools must comply with the Department of Education’s Title IX regulations by August 14.

On May 6, the Department of Education issued new Title IX regulations that define peer hostile environment harassment for Title IX purposes per the Court’s standard from Davis:

Unwelcome conduct determined by a reasonable person to be so severe, pervasive, and objectively offensive that it effectively denies a person equal access to the recipient’s education program or activity.

Dartmouth’s sexual harassment policy, on the other hand, provides the following definition of hostile environment harassment:

[U]nwelcome sexual advances, requests for sexual favors, and other visual, verbal, or physical conduct of a sexual nature when the conduct is sufficiently severe or pervasive to deny or limit the victim’s ability to participate in or benefit from Dartmouth’s educational programs or benefits by creating an intimidating or hostile environment.

The differences may seem subtle at first glance, but the deviations Dartmouth makes from the Supreme Court’s standard have a significant effect on the breadth of the policy.

By not including this objective component, any person’s subjective view of the conduct or speech — no matter how unusually sensitive that particular person may be — is sufficient to meet Dartmouth’s standard. This means that simple teasing that would not be deemed severe, pervasive, and objectively offensive by a reasonable person and that is constitutionally protected could be sanctioned under the Dartmouth policy.

Additionally, Dartmouth’s policy states conduct must be “severe” or “pervasive,” rather than both “severe” and “pervasive.” Under Dartmouth’s “severe or pervasive” standard, a single instance of verbal conduct could be punished as sexual harassment, whereas the Court’s standard from Davis requires both severity and pervasiveness.

It’s not just Dartmouth’s sexual harassment definition that needs work; Dartmouth’s student handbook merely defines prohibited harassment as “abusive behavior or conduct that is targeted at an individual or group and is ordinarily repeated,” leaving out altogether the critical “severe, pervasive, and objectively offensive” components from the Davis standard. And while the Department of Education’s Title IX regulations apply to sexual misconduct, courts have long been applying the Davis standard to non-sexual harassment, too.

Next steps toward compliance

Dartmouth must build on the progress it made in revising its Acceptable Use Policy by getting these harassment policies in line with the Supreme Court’s peer harassment standard — the one now mandated by the Department of Education.

Until Dartmouth revises these policies (as well as its yellow light incident reporting policy, which encourages students to report “[h]ate speech” to a response team for evaluation), speech that is protected under First Amendment standards is at risk of being restricted.

And though Dartmouth is a private college not bound by the First Amendment, it broadly provides that it “prizes and defends the right of free speech,” and that “[c]ensorship is not compatible with the goals of Dartmouth.” If this is so, the college must ensure its written policies do not allow for such censorship.

Dartmouth, as well as other colleges and universities across the country, are encouraged to consult FIRE’s Model Code of Student Conduct and to contact FIRE’s Policy Reform team for assistance with complying with the Department of Education’s Title IX regulations.