FIRE > Newsdesk > The Eternally Radical Idea > Dear University of North Texas: The ‘Heckler’s veto’ is not a good thing 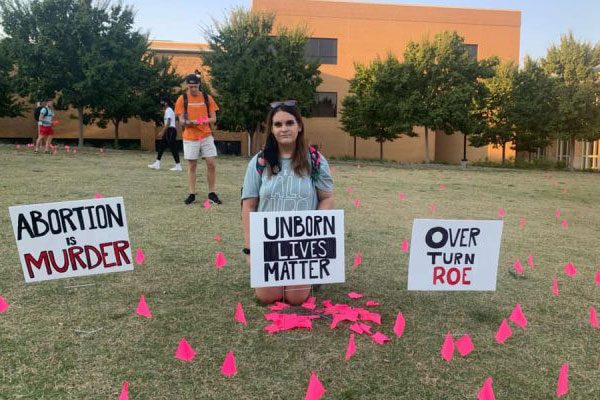 Key concept — “Heckler’s veto”: When an individual or group attempts to silence a speaker through noise, intimidation, or violence. The First Amendment requires government actors to avoid empowering the “heckler’s veto” against protected speech. The “heckler’s veto” is incompatible with free speech culture, as it limits the right to speak and the right to be heard by a willing audience on issues objectionable to groups powerful enough to bring to bear sufficient noise, intimidation, or violence.

To be a free speech defender on America’s college campuses can be an exercise in constant disappointment in administrators’ knowledge of the First Amendment, but just when we thought we had seen it all… a University of North Texas administrator has declined to issue a statement condemning vandalism of a political display because administrators at the college believed they shouldn’t interfere with the First Amendment right to engage in the “heckler’s veto.”

Since this story opens with a definition of the “heckler’s veto,” you are likely confused, particularly since UNT is a public institution and is supposed to prevent it, not encourage, respect, or rely on it. But because this isn’t the first time we’ve seen people confused about the concept of a “heckler’s veto,” we will take this as a learning opportunity. But to summarize the point: “Heckler’s vetoes” = very bad.

On Sept. 30, The Young Conservatives of Texas chapter at UNT  had placed a pro-life display of 1,000 flags on the campus lawn. Later that same day, about a third of the flags and several of the signs were stolen.

Watch this video of a liberal vandal scream profanities as he’s confronted about stealing 180 flags from an abortion memorial. pic.twitter.com/zRsm2iI3zg

On Oct. 21, YCT-UNT Chairman Kelly Neidert and the group’s adviser met with Dean of Students Maureen McGuinness to ask the university to make a statement condemning the vandalism. McGuinness demurred, because she didn’t want the institution to interfere with… wait for it… the “heckler’s veto.”

The dean further stated that she had to protect the heckler’s veto because the space was not formally reserved. If YCT-UNT had gotten a reservation, she said, “heckler’s veto doesn’t apply.”

To be entirely accurate, YCT-UNT had reserved the space, but the reservation was only quasi-official, as all formal events were suspended due to the coronavirus. And also, to be fair, McGuinness’ understanding of the “heckler’s veto” is completely backwards.

That’s not how any of this works

As my esteemed colleague Zach Greenberg has explained, the “heckler’s veto” is something the government is compelled to stop by the First Amendment:

The term comes from when a heckler — one seeking to silence a speaker — “vetoes” a speech by severely and substantially disrupting it so that it cannot continue. … If a governmental actor, such a public university, sides with the heckler by canceling the event or refusing to protect the speaker against use of force, it has failed to uphold the speaker’s free speech rights.

The university explicitly violates the rights of YCT-UNT when it permits a “heckler’s veto” by refusing to prevent or punish theft, vandalism, or disruption of YCT-UNT’s lawful expression. And the constitutional obligation on the university is the opposite of what the dean seems to believe it is: UNT must protect speakers from being disrupted by ideological opponents.

Nor does the dean’s explanation that reserving a space would somehow activate the institution’s ability to defend the First Amendment make any sense. Neither the First Amendment nor its obligations can be subordinated to zoning schemes, as our speech code litigation demonstrates on a regular basis. UNT does not have the power to exempt itself from protecting civil rights, even if it is inconvenient, and even if there is a pandemic. (And again, even if UNT could lawfully do that, YCT-UNT did reserve the space.)

It seems clear that, at the very least, McGuinness needs a deeper explanation of the “heckler’s veto.” I find that complex legal ideas are easier to understand when we follow their evolution; when we see the problems that courts were trying to solve, we have a better chance of understanding how those solutions are intended to work.

The bad old days of censorship-by-intimidation

It’s important to remember that most First Amendment principles, as we currently understand them, are less than a century old. The “heckler’s veto” is no different.

Irving Feiner was a 24-year-old junior at Syracuse University (on the GI bill) when, on March 8, 1949, he delivered a speech on a public street corner. His speech drew enough onlookers (his supporters said 25 to 30; the court later said 75 or 80) that it attracted the attention of nearby police. 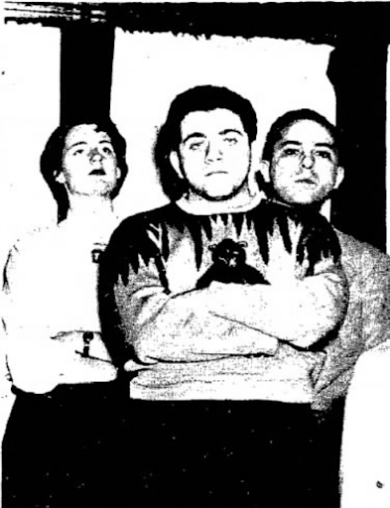 Irving Feiner, center, stands by the rear exit with two other event organizers at the speech he was promoting when he was arrested. Photo from the March 9, 1949 edition of The (Syracuse) Post-Standard.

Feiner’s speech, in theory, was designed to encourage people to attend a speech later that evening by a former assistant attorney general. But the crowd’s reaction was driven by, in the words of the Supreme Court, Feiner’s “endeavoring to arouse the Negro people against the whites, urging that they rise up in arms and fight for equal rights.” One person threatened to pull Feiner off the box.

Police asked Feiner to get down and stop talking; he repeatedly refused. Eventually, Feiner was arrested for disorderly conduct, a charge for which he would eventually be convicted and sentenced to 30 days in jail, a conviction upheld on appeal by two intermediate state courts, and ultimately, upheld by the Supreme Court.

The court’s majority took the position that Feiner’s arrest was viewpoint-neutral; after all, he was arrested not for his speech, but for “the reaction which it actually engendered,” which created a “clear danger of disorder.”

I think this conviction makes a mockery of the free speech guarantees of the First and Fourteenth Amendments. The end result of the affirmance here is to approve a simple and readily available technique by which cities and states can with impunity subject all speeches, political or otherwise, on streets or elsewhere, to the supervision and censorship of the local police. I will have no part or parcel in this holding which I view as a long step toward totalitarian authority.

Feiner would serve his 30 days. Syracuse would expel him. (Syracuse remains remarkably hostile to free expression. Click here to tell them to do something about their speech policies.)

From Kalven to Brown 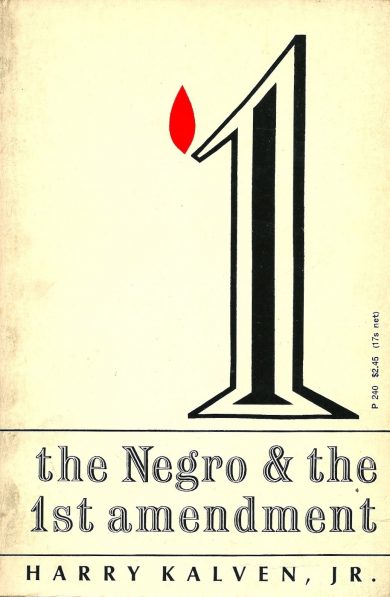 It would be University of Chicago Law School professor Harry Kalven, Jr. who would concentrate the concerns of Justices Black and Douglas into a named legal principle.

Kalven would go on, in 1967, to chair a committee at the University of Chicago charged with writing “a statement on the university’s role in political and social action.” Today, the resulting Kalven Report remains one of the most important statements of the ideals of academic freedom in American higher education.

In April 1964, Kalven gave a series of lectures at The Ohio State University on the relationship between the Civil Rights Movement and the Constitution; those lectures would be adapted into a book, “The Negro and the First Amendment,” published the following year.

In it, Kalven wrote, “If the police can silence the speaker, the law in effect acknowledges a veto power in hecklers who can, by being hostile enough, get the law to silence any speaker of whom they do not approve.” And in questioning whether the Supreme Court would require police to protect black speakers in the south, Kalven pondered, “[W]ill the court permit the South one gigantic heckler veto?”

Kalven would not have to wait long for an answer to his question.

In February of 1966, the Supreme Court decided Brown v. Louisiana, a case involving five black men who refused to leave a public library when asked and who were charged under the state’s “breach of the peace” statute. Justice Abe Fortas began the majority opinion by pointing out that this was the fourth time in just over four years the court had been asked to weigh in on Louisiana’s breach of the peace statute being used against Civil Rights protesters. In the first footnote, Justice Fortas cited, among other things, Kalven’s “heckler’s veto.”

The court overturned the convictions.

In the years since, the Supreme Court has consistently invoked the “heckler’s veto” to describe the need to protect speakers from the angry mobs that would silence them in a variety of different contexts, including:

UNT should issue a statement defending the rights of student speakers

With an understanding of the above, it is my hope that UNT will realize it has misunderstood its obligations under the “heckler’s veto” and move to actively protect the rights of students on campus, like YCT-UNT, who face vandalism, threats, and theft for the expressions of their opinions. That is, after all, the very least UNT can do to ameliorate the effect of the “heckler’s veto” it has thus far encouraged by its inaction.

I should note that FIRE is happy to answer questions (even in formats other than nearly 2,000-word history lessons) from administrators seeking to understand their obligations. While the principles of free expression are easy to grasp, applying those principles according to precedent, in the middle of a controversy, is a much trickier task. At a public college, the obligation when it comes to protecting civil rights is to do it correctly, not to do it alone.