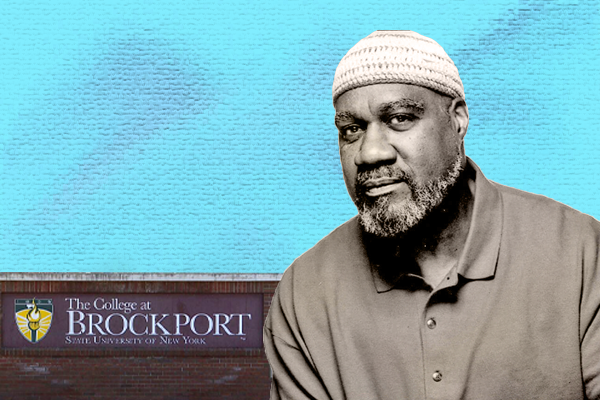 After originally affirming its faculty’s academic freedom and expressive rights, SUNY Brockport continues to bungle its handling of an appearance by faculty-invited speaker Jalil Muntaqim, first defunding the event and then moving it online. Muntaquim’s talk will now take place virtually tomorrow at 6:30 p.m ET.

Controversy arose March 13, when New York state Sen. Rob Ortt called for SUNY Brockport to rescind a professor’s invitation to Muntaqim, a former Black Panther who was convicted in the 1970s of murdering two police officers. Ortt also criticized the university’s event page for characterizing Muntaqim as a “political prisoner.”

The university faced additional calls from elected officials and the public alike to disinvite Muntaqim.

Anthony Bottom was not a “political prisoner.” He’s a convicted cop-killer.

Calling this an “intellectual conversation” on a taxpayer-funded state campus, what are you thinking @brockport? You should immediately RESCIND this invitation.@SUNY https://t.co/VIz2A86hYi pic.twitter.com/1kSEOSR04w

FIRE quickly warned SUNY Brockport not to heed critics’ calls, as the university is legally obligated to uphold the First Amendment rights of faculty to invite speakers to campus regardless of viewpoint. And while the university did not cancel the event, it defunded Muntaqim’s appearance on the same day as FIRE’s warning.

Chief Diversity Officer Damita Davis announced that the university’s Promoting Excellence in Diversity Grant Committee, which originally approved the grant to fund Muntaqim’s speaking appearance, rescinded its approval based on unspecified “new information.” This earned the university a letter from FIRE, explaining that defunding a faculty-invited speaker’s appearance based on viewpoint violates faculty academic freedom rights, which the First Amendment protects.

As we said at the time:

Some may argue the event was defunded due to Muntaqim’s past conduct, not his speech. However, when punishment of speech is based on a speaker’s past conduct and/or what that portends for what they will say, as appears to be the case here, it indicates that the punitive measure — rescinding the grant — is speaker — and/or viewpoint-based. This, in and of itself, is problematic and unconstitutional.

As if the university’s defunding of the event wasn’t enough, on March 23, it announced Muntaqim’s in-person event would be moved online to “mitigate any potential security concerns.” This, we wrote at the time, “is a classic example of a heckler’s veto — the university capitulating to detractors’ demands rather than defending expressive rights, which it is required, by law, to do as a public institution.” It’s also a clear violation of the university’s First Amendment obligations.

Instead of co-opting the event and unilaterally moving it online, the university should have provided adequate security to ensure the event could occur as planned by the faculty member.

In fact, university police now are reportedly asking other police agencies to help provide security in advance of the online event. If protests are expected anyway and this security is necessary, no security interests appear to have been advanced by moving the event online from its originally intended in-person setting.

On March 31, SUNY General Counsel Adam Haney wrote FIRE denying that the university’s defunding of the event was viewpoint based. Instead, he blamed faculty’s “noncompliance with internal . . . processes,” and said the event would proceed, funded by an anonymous donor.

“The College understands that all faculty members, students, and the campus community enjoy protection under the First Amendment and the College will not violate such rights,” Haney claimed.

FIRE quickly responded, questioning the university’s claims that the appearance was defunded due to procedural issues, as Davis had said it was defunded due to “new information” and that the approval process would be reviewed. This implies, as we wrote, that the defunding of the event related to disagreement with the grant committee’s process, not the faculty member’s “noncompliance” with it.

[E]ven if the faculty member’s noncompliance is at issue, SUNY Brockport should make that faculty member aware of the issue, rather than leave him in the dark and chill his speech. While we also understand an anonymous donor has stepped in to fund Muntaqim’s appearance, that circumstance does not remove SUNY Brockport’s First Amendment obligations to respect faculty’s academic freedom.

We also pushed back on the decision to move the event online:

​​Some may strongly disagree with inviting Muntaqim to campus, and there may be protests or attempts to disrupt the event because of those disagreements. However, lack of consensus is not a valid basis for SUNY Brockport to move the event online, a decision which must ultimately rest with the professor who invited him. It is the university’s responsibility to ensure faculty are able to exercise their expressive rights by hosting speakers, and to apply neutral event-related guidelines in a viewpoint-neutral manner.

SUNY Brockport can claim it “believes in freedom of speech and wants to continue to encourage the willingness of the community to engage in critical and respectful dialogue,” but its actions suggest otherwise. And while SUNY says the college “will not violate” faculty rights, it continues to do so. Both defunding the Muntaqim event and moving it online without consulting or obtaining consent from the faculty — and doing so based on objections to the speaker — contravene the university’s First Amendment obligations.

FIRE has watched the university take misstep after misstep while handling this situation.

No matter how repugnant or offensive the university or members of the community find Muntaqim’s actions or views, he was invited to speak by a faculty member, and that faculty member’s rights must be respected.

FIRE has watched the university take misstep after misstep while handling this situation. To be sure, it’s difficult to keep hecklers in line, especially when they’re numerous and loud. But as a public institution bound by the First Amendment, SUNY Brockport was obligated to do just that.

Now that we’re aware SUNY Brockport is willing to openly violate faculty rights and flout its binding legal obligations, we’ll keep a closer eye on the university to make sure it doesn’t happen again.