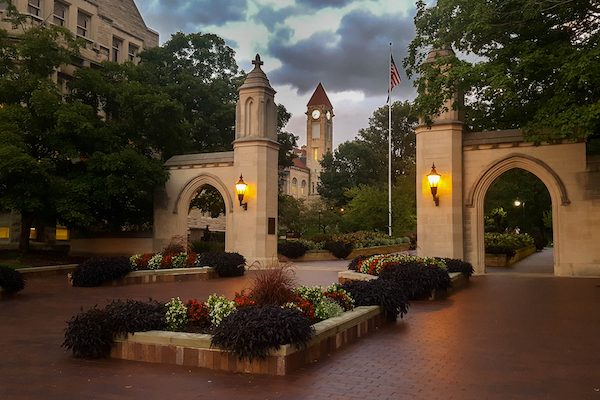 What happens when a public records request isn’t from a member of the public, but from within a university’s own administration? In other words, what if the FOIA is coming from inside the house? It’s unusual, but not unprecedented — and events at Indiana University, including a recent and unusual change in policy, suggest it may have happened again.

Steve Sanders is a tenured law professor at IU. He is also an IU alum and was long involved with the institution before joining the faculty. Because of his deep relationship with the university, Sanders has become particularly interested in its leadership and administration.

Earlier this year, Sanders started looking into IU’s search for a new president to replace the retiring Michael McRobbie. That process, like many presidential searches, was secretive, and Sanders wasn’t involved. He did, however, speak with friends and colleagues about the search, and after learning about a large payment to the outgoing president for “consulting services” — which was approved without a vote by the board — Sanders wrote an article about the results of his investigation.

Before he could publish the investigation, Sanders learned — as he would later write in a post in advance of his broader story — that a law firm, which had previously been retained by IU in other matters, made a public records request for Sanders’s emails relating to IU’s presidential search. Sanders hypothesized that the request was on behalf of IU itself, in an effort to find details of how Sanders learned the information he’d acquired for his article.

Use of public records requests for faculty emails can be abused and used to chill academic freedom.

Sanders also filed a complaint against IU with the Indiana Public Access Counselor regarding the university’s payment to McRobbie. He argued the board of trustees violated Indiana’s open meetings law, because it did not vote on that payment at a public meeting. On Nov. 3,  Jacqueline Simmons, then IU’s general counsel, responded to the Public Access Counselor complaint and alleged, in part, that Sanders violated multiple IU policies in the course of researching and writing about the presidential search. (Simmons has since left IU in what appears to be a sudden departure from the university, as IU made no public announcement of the kind it has with other VP-level departures.) In a reply letter to the Public Access Counselor, Sanders explained that the data security policies Simmons cited did not apply to him or his investigation. Sanders asserts he had the right to seek information and share his findings, given that he was not part of the search team.

FIRE wrote IU today, arguing that IU’s actions create a chilling effect not only on Sanders, but on its faculty more broadly. Accusations that constitutionally protected speech violates university policy can themselves violate the First Amendment, even if the speaker is never actually disciplined for that speech. The Academic Freedom Alliance also wrote the university on this issue last month.

If an IU administrator attempted an end-run around university policy, IU’s administration must transparently account for its conduct.

Simmons’s accusation before the Indiana Public Access Counselor that Sanders violated university policy is likely to deter both Sanders and other IU faculty members from engaging in protected expression. Likewise, other faculty members who learn of the university’s formal position will be chilled from exercising their rights — whether as private citizens or as faculty members — to gather information, request records, and share their findings.

Additionally, use of public records requests for faculty emails can be abused and used to chill academic freedom. While technically subject to public records requests, IU policy rightly prohibits administrators from accessing faculty emails except in certain narrowly defined situations. It would be very concerning if administrators attempted to circumvent this policy by going through an outside law firm to gain access to emails of its own faculty.

Notably, that policy was updated Monday — for the first time in a decade — with the addition of a single sentence (with emphasis added):

University administrators shall not initiate a public records request under Indiana’s Access to Public Records Act seeking access to electronic information (as defined in this policy) of Indiana University students, faculty or staff; however, this does not apply to students, faculty and staff who initiate, in their own personal capacity and not on behalf of Indiana University, requests for information under Indiana’s Access to Public Records Act.

That’s a good policy. At best, administrators navigating the tension between faculty or student privacy and public transparency have a conflict of interest when applying those laws to their own requests. At worst, it’s a license to root through records that should be redacted or withheld under the guise of determining what should be produced.

IU must reaffirm Sanders’s First Amendment rights by disclaiming its prior assertions, and must publicly share what it knows about the request for Sanders’s emails

It’s also hard to believe the timing of this policy’s adoption — one that appears unique, as we’re unaware of any other institution with a similar policy — is coincidental. Perhaps it’s merely recognition that end-runs are theoretically possible, and intends to prevent that from ever happening. Color us skeptical: It seems to suggest such a thing had been done in the past, though, and only adds to our concern — already piqued by involvement of that particular law firm, the small universe of people who would have known about Sanders’s article pre-publication, and IU’s failure to comment on the matter thus far — that an IU administrator was behind the request for Sanders’s emails.

IU must reaffirm Sanders’s First Amendment rights by disclaiming its prior assertions, and must publicly share what it knows about the request for Sanders’s emails in order to bring transparency to its administrators’ conduct in responding to public criticism. That includes being transparent about its relationship with the outside firm and, if the request was made at the university’s initiative, waiving any attorney-client privilege attendant with that directive. If an IU administrator attempted an end-run around university policy, IU’s administration must transparently account for its conduct.

UPDATE (Dec. 22, 2021): Indiana University did, in fact, issue a public records request to itself. An invoice obtained by professor Sanders, below, indicates that the university paid the law firm (Hoover Hull Turner LLP) $5,682.70 to “[p]repare and issue” a public records request “to IU,” hold two teleconferences with then-Vice President and General Counsel Jacqueline Simmons, and spend fifteen hours reviewing records produced in response to the public records request. The invoice indicates that it was approved by Deputy General Counsel Joe Scodro, designated as “lead” by the university. Simmons has since left the university — the university told law.com that she retired — and Scodro has assumed the role of acting general counsel. (The invoice does not otherwise suggest that Scodro communicated with the firm about the request.)

That invoice is below. Still unanswered is who at the university reviewed the records to remove confidential information before producing them and whether they knew the requestor was working for the university. In this end-run around the university policy — which limits access to faculty members’ emails in recognition of the important academic freedom and freedom of expression interests at stake — what information was accessed, and by whom?

IU owes Sanders, its faculty, and the public an explanation.