Since our founding in 1999, the Foundation for Individual Rights in Education (FIRE) has fought the culture of censorship on campus. One worrisome trend undermining open discourse in the academy is the increased push by some students and faculty to “disinvite” speakers with whom they disagree from campus appearances. While most noticeable around commencement season due to the high-profile status of many commencement speakers, disinvitations occur all year—and have been steadily increasing over the past 15 years.

Our research on disinvitations over the past 15 years identifies five trends:

This report demonstrates that disinvitation on campus is a two-fold problem: Students and faculty are demanding the exclusion of opinions with which they disagree, and campus administrators and invited speakers are increasingly willing to give in to these demands.

FIRE researched disinvitation efforts at public and private American institutions from the year 2000 to the present by collecting data from a number of sources, including news accounts and case submissions to FIRE and other organizations.

It is important to note that this research is not exhaustive. It would be nearly impossible to compile information on every disinvitation attempt. However, FIRE is confident that this data accurately documents a culture of censorship on college campuses over the last 15 years.

The term “disinvitation incident” is used to describe the controversies on campus that arise throughout the year whenever segments of the campus community demand that an invited speaker not be allowed to speak (as opposed to merely expressing disagreement with, or even protesting, an invited speaker’s views or positions). We make a distinction between an attempt to censor a speaker and the actual end result of a speaker not speaking. “Disinvitation incidents” is the broadest category, including “unsuccessful disinvitation attempts” and “successful disinvitations.”

While disinvitations on campus are a year-round phenomenon, controversies surrounding commencement speakers are clustered around the same calendar weeks and generally feature the highest-profile speakers. Accordingly, these incidents typically garner the most publicity. For these reasons, we refer to the time period near graduation as “disinvitation season.”

Speakers are more likely to be targeted for disinvitation for holding or expressing viewpoints perceived as conservative by faculty or students. However, disinvitations on campus are usually a response to the perceived nature of a specific political stance rather than a speaker’s complete political ideology, meaning that many of the disinvitation efforts based on a speaker’s perceived “conservative” viewpoints are undertaken against speakers who might self-identify as liberal. A more useful way to classify disinvitation attempts on the basis of politics, therefore, is as coming “from the left of the speaker” or “from the right of the speaker,” rather than an assessment based on the speaker’s more general political orientation.

For example, students at University of California, Hastings College of the Law urged the administration to disinvite former United States Secretary of Homeland Security Janet Napolitano, a Democrat, because of her support for policies that allegedly led to the increased deportation of undocumented immigrants. Therefore, although Ms. Napolitano does not self-identify as conservative, FIRE has classified her disinvitation attempt as coming “from the left of the speaker.”

1. The number of disinvitation incidents has risen dramatically. 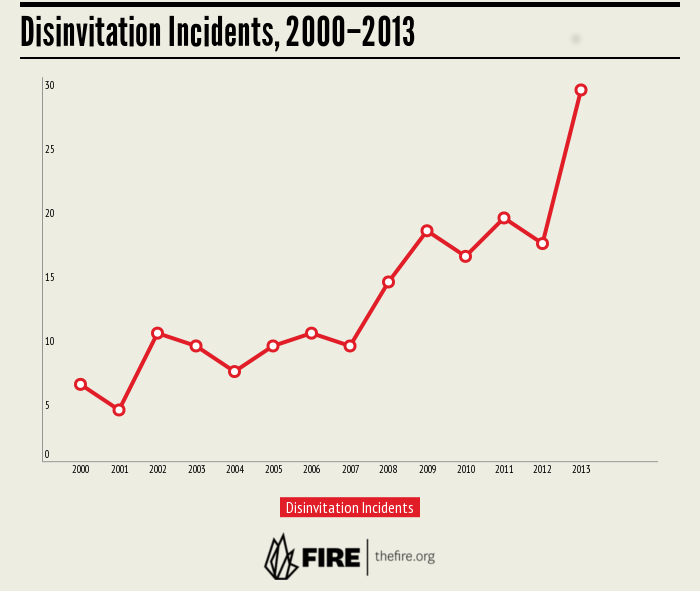 *Complete data for calendar year 2014 was not yet available
at the time of this report’s publication, May 2014.

FIRE has compiled and analyzed 192 reports of disinvitation incidents involving campus speakers since 2000, including campus speeches, commencement ceremonies, and other events or engagements. The data demonstrates an upward trend in the frequency of disinvitation attempts, with a sharp rise beginning in 2007 and peaking in 2013 with 29 incidents. The long-term trend becomes even more apparent when examining the data in three-year groupings: 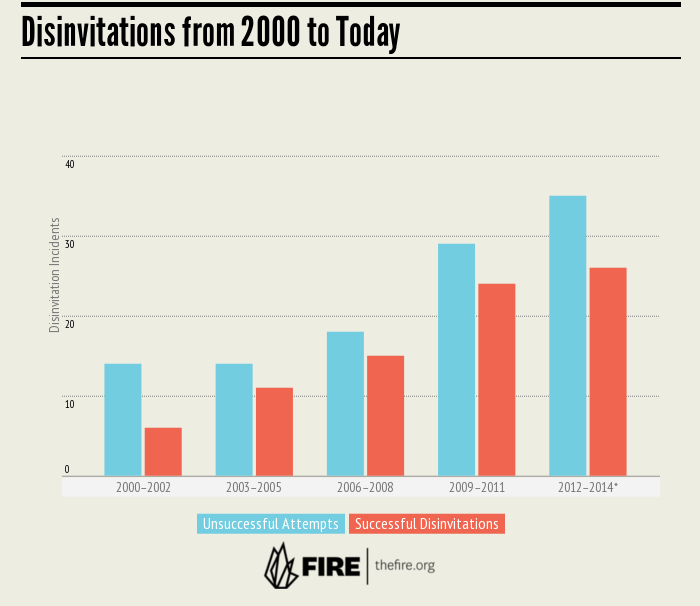 *Complete data for 2014 was not yet available
at the time of this report’s publication, May 2014.

2. The number of successful disinvitations has increased. 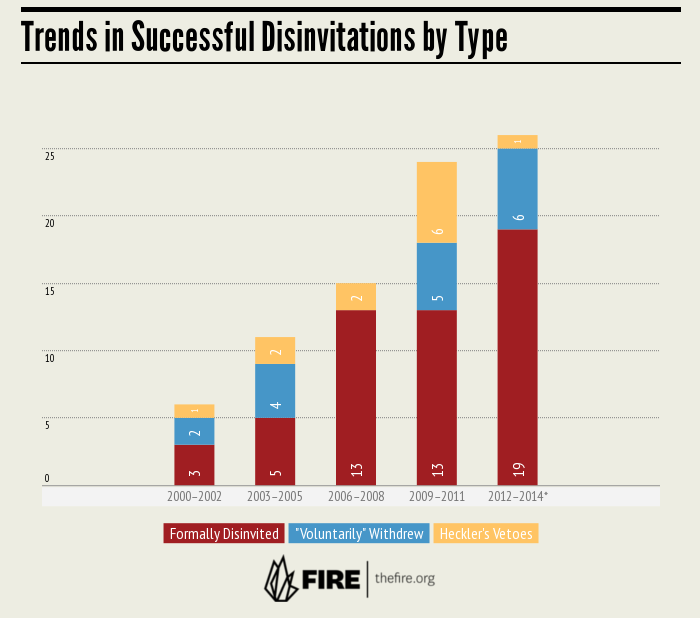 *Complete data for 2014 was not yet available
at the time of this report’s publication, May 2014.

Successful disinvitations take three different forms: a formal revocation of the invitation, a withdrawal by the speaker, and the “heckler’s veto.” The past 2.5 years, 2012–2014, have seen the greatest number of successful disinvitations, totaling 26. Nineteen of these took the form of formal disinvitations, such as in the case of Dustin Lance Black at Pasadena City College,[1] and six were in the form of speaker withdrawals in response to student or faculty demands, such as Christine Lagarde at Smith College and Condoleezza Rice at Rutgers University. Over the past 15 years, formal disinvitation has been the most common method by which speakers are prevented from speaking on campus, with 53 speakers having their invitations rescinded. But the other numbers are troubling as well. Since 2000, 17 speakers have chosen to withdraw in response to student and/or faculty demands, and 12 speakers’ presentations have been so significantly disrupted that they were effectively disinvited. 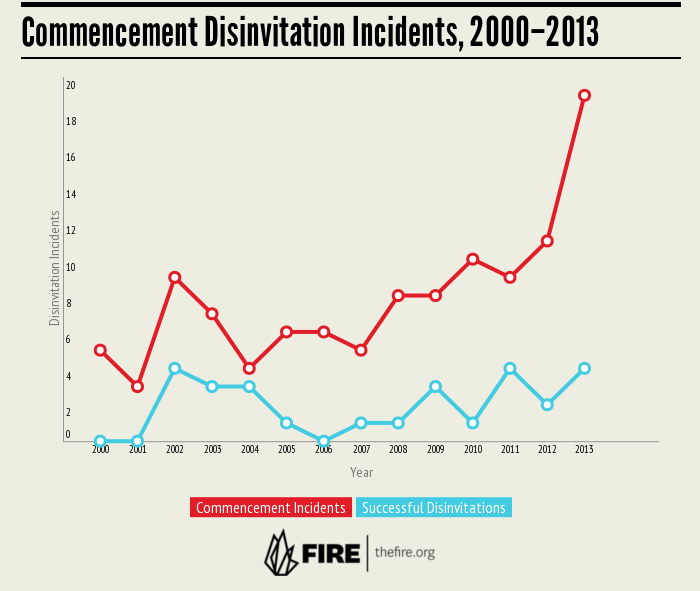 3. Speakers are more likely to face opposition and be targeted for disinvitation for holding or expressing viewpoints perceived as conservative by faculty or students. 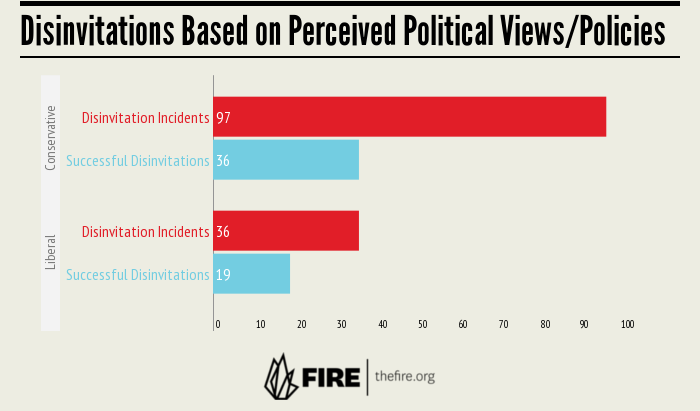 The data shows that speakers with perceived “conservative” viewpoints (which, as noted earlier, includes many speakers who might not self-identify as conservative) have faced a majority of the backlash. Successful disinvitations from the left of speakers are nearly double those from the right of speakers, with nearly triple the total number of disinvitation incidents. 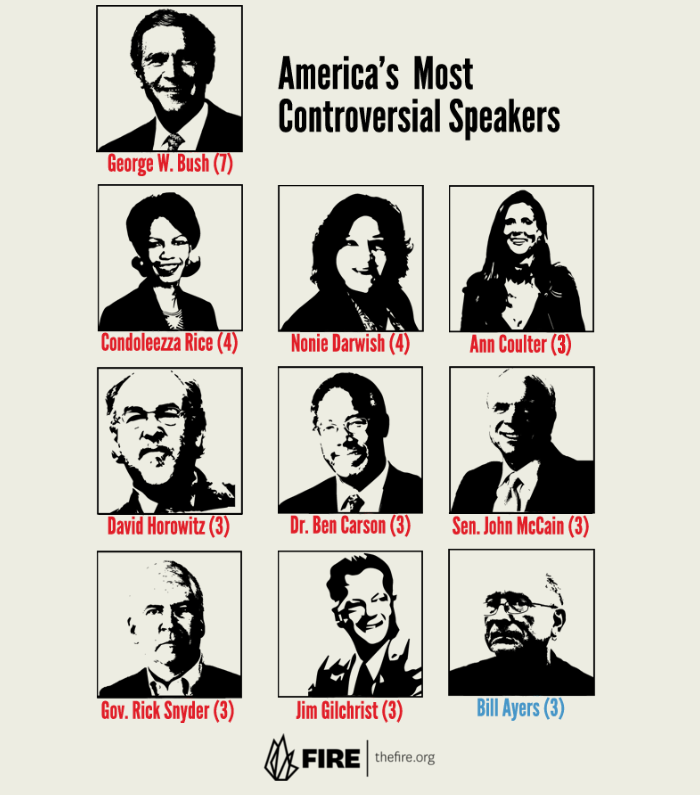 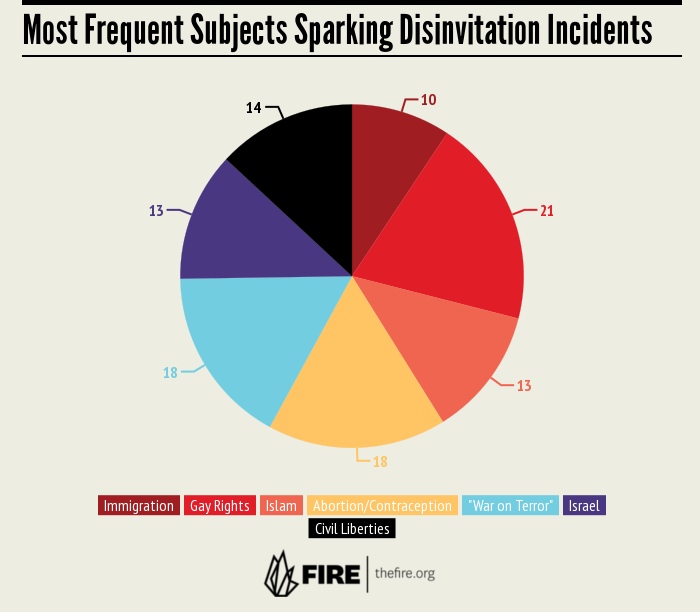 Other speakers faced disinvitation efforts over their views or policies on immigration, Islam, Israel, and civil liberties.

4. Disinvitation incidents occur with nearly equal frequency among public, private, and sectarian schools, demonstrating that disinvitations are not isolated to any particular type of university. 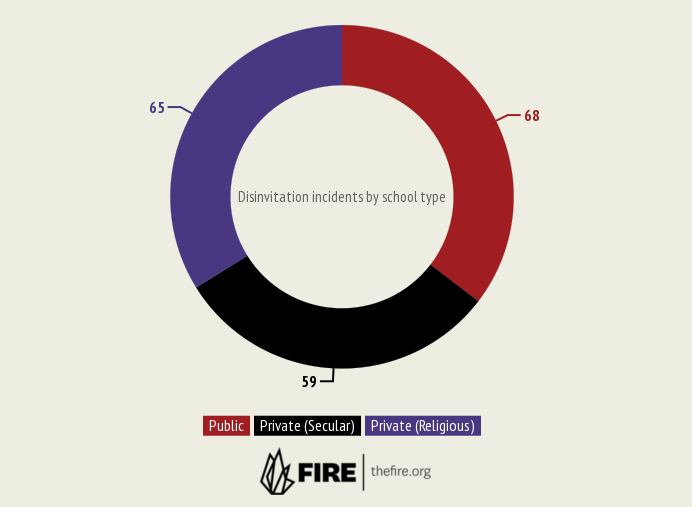 Disinvitation incidents occurred in remarkably even numbers among public colleges and universities (68), private secular institutions (59), and private religious institutions (65). The split between the types of institutions is surprisingly close, revealing a systemic problem—some students and faculty at colleges and universities of all types appear increasingly unwilling to allow those with whom they disagree to speak and advocate for their position on campus. 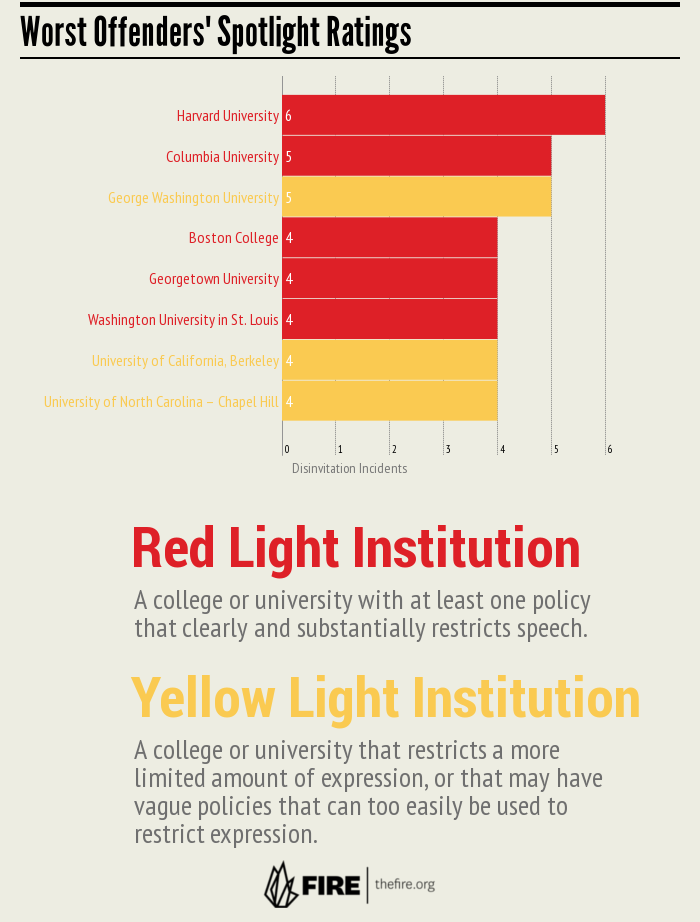 Of the eight most disinvitation-prone institutions, five received “red light” and three received “yellow light” ratings in FIRE’s most recent annual report on speech codes, Spotlight on Speech Codes 2014: The State of Free Speech on Our Nation’s Campuses. These ratings indicate that these institutions maintain policies that are hostile to speech and expression.

Harvard University boasts the most disinvitation incidents of any college, with a total of six. Unsurprisingly, FIRE rates Harvard as a “red light” school, meaning it maintains one or more policies that significantly restrict student speech. One of Harvard’s most egregious speech restrictions is a section of its “Free Speech Guidelines” prohibiting “behavior evidently intended to dishonor such characteristics as race, gender, ethnic group, religious belief, or sexual orientation.” It seems that the Harvard community—which has mounted campaigns to disinvite speakers based on their views on topics like immigration, Israel, and sexual orientation—may have internalized this policy.

As FIRE has long argued, policies like Harvard’s teach students the wrong lessons about free speech, suggesting to students that they have a right not to encounter speech that they do not like, and that voicing ideas with which they disagree or by which they are offended should be a punishable offense. Such policies likely contribute to the culture of censorship that makes students feel entitled to demand the disinvitation of speakers. In addition to Harvard, the institutions topping the list of those with the most disinvitation incidents include Columbia University, George Washington University, Boston College, Georgetown University, the University of North Carolina – Chapel Hill, the University of California, Berkeley, and Washington University in St. Louis. That all these schools maintain “red” or “yellow” light designations is not surprising.

The disinvitation phenomenon is important—and worrisome—because of what it portends for free speech on campus more generally. A faculty that is hostile to the mere presence of oppositional, inconvenient, or unpopular speakers and beliefs will likely be less adept at teaching students the values of critical thinking, open-mindedness, and free intellectual inquiry that universities are supposed to embody. Students who refuse to hear opposing viewpoints will be less likely to learn critical thinking skills and less able to defend their own beliefs once off-campus. Moreover, disinvitation efforts may be fueled by a campus climate that encourages disregard for free speech rights, as suggested by the correlation between successful disinvitations and restrictive speech codes.

[1] After suffering significant public criticism as a result of this decision, Pasadena City College later re-invited Black, who accepted the offer.