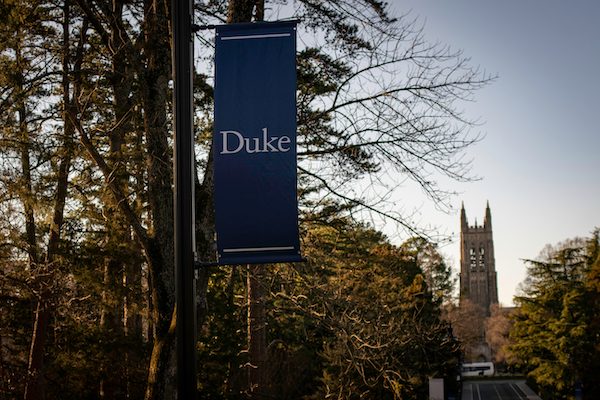 When Duke’s student senate approved a chapter of Students Supporting Israel, the club’s members thought they had finally earned university-recognized status. Its hearing before the student senate, after all, had not exactly been smooth sailing: after the senate twice extended the questioning period and senators probed how the group would communicate with those with whom members disagree, SSI’s members were happy to be recognized — until the one student who stood in their way, Duke Student Government President Christina Wang, vetoed SSI’s recognition, citing a solitary social media post.

On Nov. 13, a Duke student shared an article about the student government’s recognition of SSI, complaining that recognition shows Duke “promotes settler colonialism.” SSI, responding to their critic, posted a screenshot of the tweet to Instagram, adding, in part:

To Yana and others like her, please allow us to educate you on what “settler colonialism” actually is and why Israel does not fall under this category whatsoever. These types of narratives are what we strive to combat and condemn, which is why Duke’s chapter of Students Supporting Israel has been officially established & is here to stay!!

Wang said she vetoed SSI because of this post, stating that the group “singled out an individual student on their organization’s social media account in a way that was unacceptable for any student group and appeared antithetical to the group’s stated mission to be welcoming and inclusive to all Duke students.” She added that other groups “may be denied, reviewed, or suspended at any time” if they exhibit “similar conduct.”

FIRE wrote to Duke’s student government today to explain that, because the university pledges to protect the expressive and associational rights of its students, it must not deny student groups recognition based on their protected expression. Although Wang and others may believe SSI’s post is inappropriate or uncivil, it is protected by the university’s policies, which guarantee students expressive rights.

This important principle is what protects students’ ability to organize around causes or views—including through formal student organizations—in order to influence their institutions, communities, and country. “[D]enial of official recognition, without justification, to college organizations,” the Court held, “burdens or abridges” their associational rights.  In Healy, for example, the Supreme Court of the United States held that a college’s refusal to grant recognition to a chapter of Students for a Democratic Society—due to its “published aims . . . which include disruption and violence”—violated the student members’ expressive rights.

This is the second time in the last week FIRE has written to Duke regarding two separate violations of the university’s promises of free expression. FIRE has long commended Duke for its strong promises of free expression and speech-protective policies, as indicated by the “green light” rating the university earns. However, if Duke defaults on these promises, they are nothing more than words on paper.

Denial of recognition of SSI—which burdens its members’ rights to expression and association—is premised on its having “singled out” a critic in a manner deemed uncivil. While Duke is free to encourage students and student organizations to engage in civil discourse, it cannot require that students limit their advocacy only to polite, sober tones.

We also explained that Duke’s student government cannot deny a group recognition because of the risk that its expression may be perceived by others as unwelcoming:

Disagreement over contentious issues will rarely be perceived as “welcoming” to others. The possibility that SSI may disagree with other students in the future, even vehemently so, is not a reason to prevent recognition; instead, it is precisely the risk Duke undertakes when it promises its students freedom of expression.

This is not the first time FIRE has seen student governments take action against student groups based on their viewpoint or protected speech. In March, a progressive Zionists club was denied recognition at Skidmore College, and earned recognition only after FIRE sent a letter explaining that the club could not be denied based on its viewpoints. Additionally, Wichita State University’s student government denied recognition to a Turning Point USA chapter because student senators did not want to endorse the organization. Wichita State’s student supreme court had to step in to grant the club recognition.

Fordham University’s administration denied recognition to a chapter of Students for Justice in Palestine to avoid “polarization.” After a lawsuit and years in court, Fordham was ordered by a court to recognize the group.

And if the student government does not do so, Duke’s administration must step in. Duke cannot permit students to violate university policy by denying other students’ expressive rights.