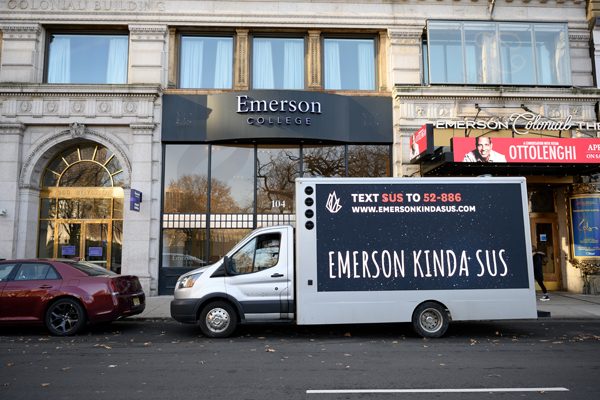 Emerson College’s search for a new president is underway as interim President William Gilligan’s time as leader of the private Boston college winds down. Among the priorities for the new president listed in a prospectus published on the school’s presidential search website is the understanding that “free expression” of ideas is a “non-negotiable” value. As the internet saying goes: Big, if true.

The five page document lays out the criteria for a new president “who understands both the value of higher education and the power of communication and the arts to shape and influence our world.” As one of several requirements, the new president must understand that “Underpinning the College’s academic core is a set of non-negotiable values including . . . [a]ppreciation for diverse ideas and the free expression of them.”

This requirement hits all the right notes. And if Emerson wants to play to its tune, it can get a head start by ameliorating the college’s reprehensible treatment of the campus chapter of Turning Point USA. Readers of FIRE’s Newsdesk will be well aware of how Emerson’s treatment of TPUSA contravenes its own policies promising students the “right to participate in the open exchange of ideas and freedom of expression,” as well as its pledge that “the first amendment [sic] of the US Constitution is of high importance” to the college.

With the new semester about to begin, members of TPUSA told FIRE that Emerson’s department of Student Engagement and Leadership has informed the group that it cannot attend a student organizations fair because the group is still without a faculty advisor. TPUSA has tried, but been unable, to secure a faculty advisor in the wake of controversy surrounding the group’s expression on campus.

A student group at @EmersonCollege was suspended and is under investigation for handing out these stickers critical of the Chinese government.

The controversy began in October of 2021, when Emerson investigated the campus chapter of TPUSA for distributing stickers on campus with the phrase “China Kinda Sus,” a criticism of the Chinese government. Despite determining that TPUSA “did not intend to target anyone other than China’s government,” the university’s conduct board suspended the group for creating “a hostile, intimidating or offensive working, living or learning environment.” An administrator subsequently rejected TPUSA’s appeal.

FIRE pulled out all the stops to publicize the college’s treatment of TPUSA. But Emerson outdid itself once again and derecognized TPUSA because the group was unable to secure a faculty advisor—which came of little surprise after Emerson’s administration publicly condemned the group’s speech. Going above and beyond to censor your own students to protect the reputation of a foreign government earned Emerson a spot on FIRE’s 2021 list of the 10 worst colleges for free speech.

Emerson’s prioritization of free expression in its search for a new president is an encouraging sign, to be sure. In other areas, the college has signaled that it will take its commitments to student rights, along with its own legal obligations, more seriously. In a separate incident, the college clarified that an orientation event intended for “self-identified students of color” is “open to all new first time students.”

Going above and beyond to censor your own students to protect the reputation of a foreign government earned Emerson a spot on FIRE’s 2021 list of the 10 worst colleges for free speech.

In this instance, an Emerson event was initially described as “an opportunity for self-identified students of color” to connect. FIRE noticed the potential for segregation on campus, and wrote two letters to Emerson about it. The college quietly changed the language, and the current description of the event clarifies that it is “open to all new first time students” while still being aimed at “self-identified students of color.” As we’ve written before, colleges and universities may tailor events to meet specific students’ needs and encourage members of specific student communities to attend. But these institutions cannot ban students from events on the basis of race.

Emerson’s apparent agreement that they should not racially segregate their educational programming, as well as its stated intent to pick a president who understands the value of free expression and diverse ideas, are steps in the right direction. But its track record over the past year, particularly in its treatment of TPUSA, casts doubt on the strength of its commitment to free expression. One thing is for sure: FIRE will continue to keep a keen eye on Emerson and pressure the school to follow through on its promises to its students and its legal obligations.