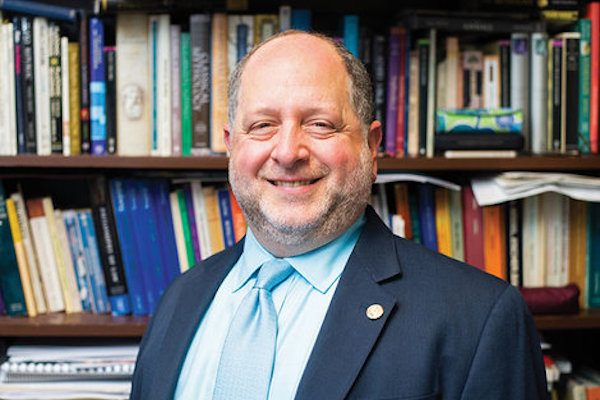 In this occasional feature, FIRE interviews members of our Faculty Network to discuss their research, teaching, and advocacy on free expression at their institutions. This month, we talked with Aeon J. Skoble, a professor of philosophy who was recently appointed Bruce and Patricia Bartlett Chair in Free Speech and Expression at Bridgewater State University. In addition to authoring and editing numerous volumes, Skoble has frequently lectured and written for the Institute for Humane Studies, the Cato Institute, and the Foundation for Economic Education, and is a Senior Fellow at the Fraser Institute. His main research topics include theories of rights, the nature and justification of authority, and virtue ethics. Skoble writes widely on the intersection of philosophy and popular culture, including co-editing the bestselling book, “The Simpsons and Philosophy.”

First things first: Could you briefly tell our readers about your background and your teaching and research interests?

I grew up in Brooklyn, went to college and graduate school in Philadelphia, and now live in Massachusetts. I spent some years in the South and the Midwest as well. My main teaching and research interests are in moral and political philosophy — rights theory, the nature and justification of authority, virtue and human flourishing. Secondary interests include ancient philosophy and the philosophical study of popular culture.

Congratulations on your new endowed chair. Can you talk a little bit about what it will mean in terms of your teaching, research, and/or service duties as a professor? What are you hoping to bring to Bridgewater State through this position?

Thank you! It’s a huge honor. In terms of the teaching piece, themes of free speech and expression are already part of a lot of what I teach. In courses on political philosophy and philosophy of law, for instance, I frequently cover those issues, and they come up in other places as well, such as Introduction to Philosophy or Introduction to Ethics. When I teach ancient philosophy, it comes up in the context of Socrates being put to death. But I do plan to create a new course for our freshman seminar program devoted exclusively to free speech and expression. In terms of my scholarship, a lot of what I write is about the nature and foundations of a free society, so here too, it’s merely a matter of focusing on freedom of expression a little more closely.

If you disagree with a colleague, it shouldn’t mean having to impugn their character or insult them. That kind of toxicity is not conducive to a well-functioning faculty.

It’s my new service duties that are the biggest change: For one thing, I intend to organize faculty panels where these issues can be discussed. I think that freedom of expression is essential for the freedom of inquiry that makes higher education possible. Tenure protects this, but the way I see it, tenure is necessary but not sufficient — there really needs to be a robust and widespread appreciation of these values amongst the faculty. Even with tenure, we still see instances of groupthink and bullying. So I’d like to facilitate broader conversations about exactly why heterodoxy and free expression are so essential.

Also, I think faculties have to be collegial. If you disagree with a colleague, it shouldn’t mean having to impugn their character or insult them. That kind of toxicity is not conducive to a well-functioning faculty. So while you may have a free speech right to insult your colleagues, there are also good reasons why you shouldn’t handle disagreements that way. It’s anti-intellectual, and it models bad behavior for students. In addition to facilitating faculty discussion, I intend to bring speakers to campus whose perspective and experience may be relevant and valuable. I’ll also be exploring ways to involve students in these discussions, perhaps student panels along the same lines as the faculty panels, and also reading groups facilitated by different faculty members. Lastly, I hope to be seen as an informal mentor or advocate for junior faculty who do experience bullying and intimidation. I have no special powers, but maybe I can help by speaking up for them and maybe helping others see why they shouldn’t bully people.

There’s never a bad time to endow a chair to foster free expression, but the present seems like a particularly opportune time to do so. Do you have any insight into what motivated the creation of your chair? Was there anything that particularly inspired Bridgewater State to invest more in promoting free expression?

I think it’s a happy combination of two things. First, our president and provost became increasingly aware that there was a need to clarify our institutional values. We’re not exactly a hotbed of cancel culture and heckler’s veto situations, but there have been a couple of cases where some expressive controversy came up and there was no clear response that affirmed these values, despite their centrality to our mission. No one in higher-ed could be unaware of how much this issue has been in the press the last few years. We’re all aware of the most egregious cases even if they take place elsewhere. None of our visiting speakers have been physically assaulted, but that it happens ever, anywhere, is a good enough reason to want to clarify our values. And second, two very generous alumni (who are married to each other) appreciate these values, understand their centrality to our educational mission, and feel strongly about helping their alma mater be the best it can be. This isn’t the first time they’ve helped the university with a generous gift.

You’ve put a lot of thought into how you can use your classroom to cultivate an appreciation for free expression, while working to do the same in the academic community more broadly. For other faculty that are looking to get more involved in this area, are there any key pieces of advice you would offer?

Don’t be afraid to speak your mind, even when your view is not the dominant view, but (a) always be civil, defend your views rigorously but courteously, do not respond to ad hominem attacks in kind, though you can note that that’s what the other person is doing; and (b) do your homework. It’s possible you overlooked something in the other person’s view. In general, cultivate an atmosphere in which disagreement about ideas is not conflated with personal quarrels. You can be friends and yet disagree about important issues. This goes for disagreements with colleagues and also for managing classroom discussions. Ideally you want your classroom to be a place where everyone feels like they can ask a question or challenge a statement, yet see themselves as a member of the community — a safe space — such that Bob and Susan can disagree about, say, whether we should ban capital punishment, yet regard each other as equal members of the class, fellow human beings deserving of respect. It seems to me that that’s just sound pedagogy. I cringe when I hear about professors berating students in class for their views, or when I hear that a student feels intimidated by other students. Try to model, in the classroom, the same kind of collegial disagreement you’d expect amongst your colleagues. And if you’re already tenured, defend junior faculty from bullying and call out orthodoxy when necessary.

One item on your CV caught my eye and there’s no way I’m passing up a chance to discuss it: You co-edited a volume on “The Philosophy of Michael Mann,” my favorite filmmaker bar none. I’d love to hear more about that publication and how it intersects with your academic interests.

​​I’ve been involved in the philosophy and popular culture movement literally since the beginning, contributing to a volume on “Seinfeld” in 1999 and co-editing a volume on “The Simpsons” in 2000. I’ve contributed to 17 or 18 of these, and co-edited four of them, most recently the one on Michael Mann. I’m very proud of that one. It has essays by many fine film scholars as well as philosophers. Mann, like many directors, has a distinctive “voice” and this collection really brings that out. A lot of his work deals with redemption or integrity, he’s got a distinct visual style, he’s got a particular way of using music. The origin of this volume is an auspicious coincidence: When I first started at Bridgewater State, I discovered that one of the members of my department shared my unorthodox opinion that “Miami Vice” [which Mann produced] was a far better show than superficial critics made it out to be, and this led to many discussions about Mann’s films generally. After we’d collaborated on a book about the legacy of film noir on television, we decided to work on a volume on Mann and sought out a third collaborator well-known to film scholars. Philosophical analysis of films (and TV) is fun both in terms of actually doing the work and in terms of using it as a way to get people thinking about philosophical issues. We can simultaneously get more appreciation for the film and for the questions raised. So I guess the simplest answer is that the foundations of a free society is my main academic interest, but by no means the only one!