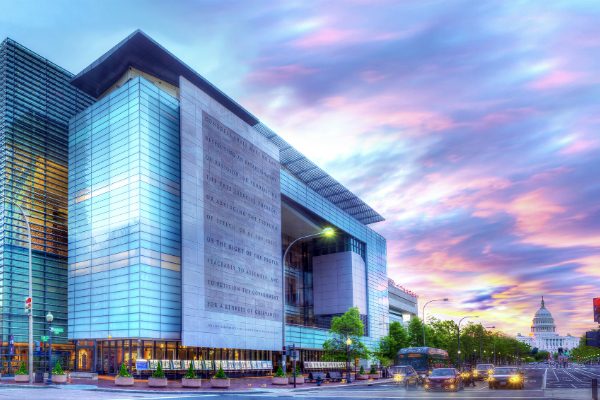 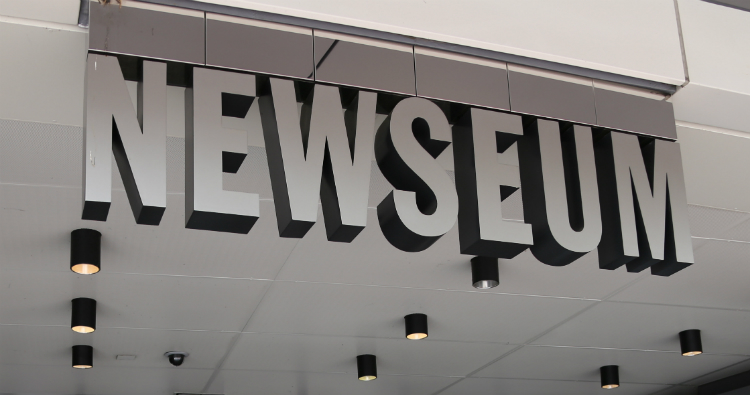 The news that the Freedom Forum is selling the Newseum building on Pennsylvania Ave. to Johns Hopkins University heralds the end of a remarkable experiment in philanthropy. The story begins in 1991 when Gannett CEO and USA Today founder Al Neuharth retired and took the Gannett Foundation, with its $600 million endowment, with him. He changed the name to the Freedom Forum and set out to create an international force for press freedom and the First Amendment.

Roots in Rosslyn (free of charge)

In 1997 the Freedom Forum opened a radically new kind of museum in Rosslyn, Virginia, just across the Potomac River from Washington, D.C. Located in an office building directly across the street from the USA Today towers, it was designed by Ralph Appelbaum Associates and featured state-of-the-art interactive exhibits, a television studio, and exhibits on the history of journalism and newspapers. Free of charge, it became both a popular destination and a target of critics.

Most of the Newseum’s executive staff were former Gannett journalists, not museum professionals, and they had the attitude of—“we don’t want to be like other museums.” And it wasn’t. With changing exhibits on the Beatles and other pop culture icons, it was called “McMuseum,” a snide reference to critics who called USA Today “McPaper.”

One of the most popular features was “Be a Reporter” which allowed visitors to read from a teleprompter and record a TV news style “stand-up” which was recorded on VHS cassette. The News History Gallery featured a timeline of historic newspaper front pages, and was appreciated by teachers seeking new ways to engage their students in history. After the film “Titanic” became a blockbuster, there were always clusters of students gathered around the front page reporting the Titanic’s sinking.

Another major feature was the giant 100’ video wall, a remarkable piece of technology at that time. With nine video projectors and walls of videotape machines connected through a network-quality video control room, the video wall could show live news or pre-produced videos. It was visually stunning and became an iconic image representing this new high-tech temple to journalism. There was also an outdoor Freedom Park with half a dozen sections of the Berlin Wall. The First Amendment was an underlying theme, but not overtly a content driver.

The Newseum attracted around 500,000 visitors a year, but Mr. Neuharth and the Freedom Forum board wanted something more. They wanted to make an impact. They wanted respect—something they rarely got at USA Today. In 1999 they started looking for property in D.C. preferably along the mall where the other museums were. The endowment had grown to more than $1 billion and it was time to think big. They offered the District of Columbia $75 million for the former Department of Employment Services lot on 6th and Pennsylvania, with a $25 million one-time low-income housing grant if DC closed the deal by the end of 2000.

The new building was designed by James Polshek, and Ralph Appelbaum Associates was brought back as the exhibit designer. The original budget was $250 million, but the cost kept rising. And rising. There was also a brutal stock market correction as the dot com economy crashed. The original Rosslyn Newseum closed in 2002, and most of the staff were let go. A small team was kept on to help design and build Newseum 2.0 and to create all the interactive exhibits and digital media. [See July 1, 2015 Washington Post story]

The new building would be a showcase, with a 70-foot tall tablet engraved with the First Amendment standing halfway between the White House and the Capital. There would be galleries devoted to the First Amendment, a Journalists Memorial, the media response to the attacks of 9/11, Electronic News, TWO HD TV studios (one overlooking the Capital), a 4D movie, a conference center, and a Wolfgang Puck restaurant. The front of the building was a four-story “window on the world” looking out on the National Gallery of Art—the enormous TV screen in the lobby casting its electric light on the street below. There was a News History Gallery with the historic front pages, a World News Gallery with a giant map of the world showing which countries had a free press, and which did not.

Though charged an admission fee, people loved it and the reviews were overwhelmingly positive. The views of the National Mall and the Capital from the upper terraces were inspiring. The exhibit text was thoughtful, the design contemporary, the videos compelling, and the interactive touchscreens (127 of them) were wildly popular. The 9/11 gallery was so emotionally moving that visitor services put tissue boxes outside the theater because so many people came out with tears in their eyes.

The First Amendment Gallery presented the Five Freedoms in a very creative and engaging array of static exhibit cases, interactive games, and a powerful award-winning video featuring Martin Sheen. The video was titled “45 Words” and it used a range of contemporary music and powerful photographs to bring immediacy to the rights protected by the First Amendment. The stories told in the five glass cases revealed important milestones in the evolution of our understanding, and the Supreme Court’s understanding, of what those freedoms mean.

One of the most popular components of the gallery was a simple video game—“Race For Your Rights” in which Bill O’Rights races against Dick Tator. They had to clear five hurdles (questions) about the Five Freedoms and you had to get at least three of the answers correct for Bill to win the race. What was most fascinating about the game was that you often saw three or four kids standing around the touch-screen arguing about the right answer. It engaged them in a way that text displays did not. Visitors were captivated by the combination of video, interactive games, and powerful personal stories—like that of high school student Mary Beth Tinker and how wearing a black armband to protest the Vietnam War landed her in front of the Supreme Court. (The court ruled that a student’s free speech rights do not stop at the schoolhouse gate.)

While the financial failings of the Newseum were obvious from the very beginning, the content was successful by any standard of measurement. Students and teachers loved the combination of carefully selected artifacts, historic photographs, compelling videos, and state-of-the-art interactive experiences. History was brought to life through the lens of journalism, with all its glory, flaws, and immediacy. The theme of the 9/11 gallery—Running Toward Danger—resonated with a generation growing up in the shadow of the burning towers.

A void in the legacy of the First Amendment

In so many ways the Newseum represented a shift in the cultural landscape, away from the traditional stone monuments to the past, toward a transparent, dynamic, engaged encounter with the future. That it opened at the exact moment that traditional journalism and news organizations faced an existential crisis should have made it the most relevant museum in Washington. But a lack of leadership left it rudderless in the swirling seas of a stormy digital newscape. Who knows what its legacy will ultimately be. There is no question, however, that when it closes its doors for the last time, it will leave a void in the legacy of the First Amendment.

Paul Sparrow was Senior Vice President at the Newseum where he worked from 1999 to June 2015. He was instrumental in the design and construction of the interactive museum in Washington, DC. He oversaw all the Newseum’s video production and interactive exhibits, developed an award-winning website, was an early adopter of social media, managed the education and programs department, and launched the Newseum’s Digital Classroom.