FIRE > First Amendment News > FAN 224: Case in Progress — The Man Who Was Criminally Cited for Filming in a Federal Park 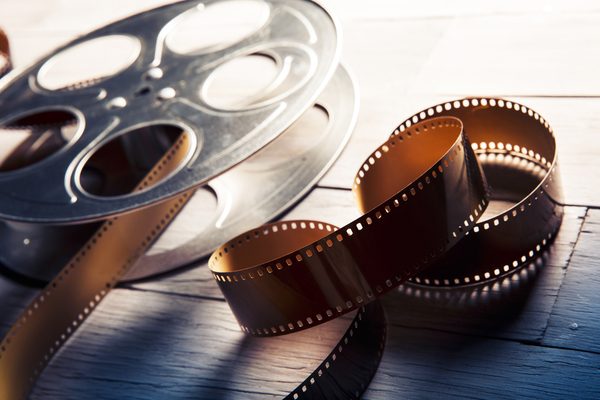 Gordon Price is a music store owner and part-time independent filmmaker; he lives and works in Yorktown, Virginia. Last year, Price and a colleague released an independent feature film about a York County stretch of road that has long been the subject of rumors of hauntings and the location of unsolved murders.

The film is entitled Crawford Road. It premiered at the Boathouse Live Restaurant in Newport News, Virginia. About 250 people attended the premiere, which received press coverage. Later, it was presented at other venues in Hampton and Yorktown, Virginia. The film also received some local TV news attention.

→ Enter the Police (from the Motion to Dismiss): “In December 2018, two officers of the U.S. Park Service came to Price’s music store and issued a citation for failure to obtain a commercial filming permit pursuant to 36 C.F.R. § 5.5(a). Price asked the officers why his film was treated differently from numerous videos of paranormal activity from the same locations that appear on YouTube or the news interview he gave that appeared on WTKR, and was told the other activities were covered by the First Amendment, and the distinction turned on the commercial nature of his film.”

→ Defendant Contests Citation: Though Mr. Price was originally without counsel, the Magistrate urged him to secure counsel in light of a possible First Amendment claim. After Price obtained counsel, his lawyer filed a motion to dismiss the violation notice, (ECF No. 9), arguing that the statutory provision commanding the Secretary of the Interior to require and establish reasonable fees for such permits, 54 U.S.C. § 100905(a)(1), violates the First Amendment’s free speech protections on its face and as applied to the Defendant.

→ Excerpt from Defendant’s Motion to Dismiss: “The statutes do not define what constitutes ‘commercial filming activities,’ and leave it to various agencies that administer the Act to implement the law through their respective rules and directives. By requiring a special-use permit for certain types of photography, the Act expressly singles out activity protected by the First Amendment for a type of licensing requirement Constitutional concerns were acknowledged as the legislation was being considered, but the bill was adopted anyway.

In implementing the law, the Department of the Interior (‘the Department’) observed that its purpose was to authorize the government ‘to collect a ‘fair return’ for the use of lands for commercial filming and certain still photography activities,’ and that it establishes no such requirements for filming or photography deemed ‘non-commercial.’ Commercial Filming and Similar Projects and Still Photography Activities, 78 Fed. Reg. 52087, 52089 (2013) (‘Commercial Filming and Similar Projects’). It made clear that, under the statutory mandate, ‘[t]he basis for requiring a permit for commercial filming is the commercial nature of the project,’ not potential damage to, or disruption of federal land, and under the law, ‘[t]here is no basis for an exclusion based on crew size or amount of equipment.'”

→ The Prosecutor Who Joined in the Motion to Dismiss: “The Government, though disputing Defendant’s analysis of § 100905(a)(l)’s constitutionality, also moved to dismiss the violation notice with prejudice. (ECF No. 19.) According to the Government, pursuing the matter further would not be in ‘the interests of justice.'”

→ Not So Fast! The Defendant’s Response: “This case is now in an unusual posture where both the government and Defendant Gordon M. Price are asking for the same thing: dismissal of the citation for an alleged violation of 36 C.F.R. § 5.5(a) for commercial filming on federal land without a permit.

The government was perfectly content to investigate Mr. Price’s filmmaking activities, send U.S. Park Police to his place of business, issue a citation, compel his appearance in court, and preclude his ability to plead ‘no contest.’ However, now that Mr. Price has obtained counsel and argued that these actions violate the First Amendment, we have reached an Emily Litella moment, where the government simply says ‘never mind.’ . . . . For the reasons set forth below, this Court should grant the requested relief of dismissing the citation (as all agree), but should not do so without issuing conclusions of law regarding the government’s system of prior restraint and unconstitutional fees. . . .”

→ Magistrate’s order (09-12-19): “In support of his earlier Motion to Dismiss, Price attested that he desired to continue filming on federal property governed by the challenged regulation but has refrained from doing so.

The Government is hereby ORDERED to reply on or before September 26, 2019, to Defendant’s contention that the court has jurisdiction to entertain his constitutional challenges notwithstanding both parties’ request that the court dismiss the pending violation notice with prejudice.”

→ Counsel for the Defendant: Robert Corn-Revere.

This from Dale Carpenter over at The Volokh Conspiracy:

[T]he Arizona Supreme Court concluded that calligraphers cannot be compelled to personally write custom wedding invitations for marriages to which they object. While there’s a lot to be said about future application of precedents like this to anti-discrimination law, I was glad to see the court distinguish cases involving expansive claims to “free speech” rights for blanket refusals to provide floral arrangements and wedding venues. Indeed, under the Arizona opinion, most of the goods and services commonly provided for weddings would not be “speech” (or would at most involve conduct with an expressive component) and therefore would not be constitutionally immunized from anti-discrimination law.

This from Rachel Weiner over at the Washington Post:

A former National Security Agency contractor accused of leaking classified information on drone warfare is arguing that his actions are protected under the First Amendment, in a challenge to the Espionage Act that has implications for WikiLeaks founder Julian Assange.

“No court has ever decided whether or to what extent First Amendment protections exist under the Espionage Act,” his public defenders wrote in a motion filed Monday.

Like Assange, Daniel Hale is accused in Alexandria federal court of sharing government secrets. Jeremy Scahill, a founding editor of the Intercept, published a series and book on drone warfare that included information Hale printed on his work computer in 2014.

The from First Amendment Watch:

A San Diego-based media organization, One America News Network (OAN), has filed a libel lawsuit in the United States District Court for the Southern District of California against MSNBC talk show host Rachel Maddow for saying it “literally is paid Russian propaganda.”

The lawsuit refers to a July 22 show in which Maddow discussed a report published in The Daily Beast that highlighted the fact that Kristian Rouz, a reporter at OAN, also wrote for Sputnik News, a Russian government-owned news outlet.

“In this case, the most obsequiously pro-Trump right-wing news outlet in America really literally is paid Russian propaganda,” she said on the show. “Their on-air U.S. politics reporter is paid by the Russian government to produce propaganda for that government.”

The suit alleges that Maddow’s statements were “utterly and completely false” and “intended to malign and harm OAN.”

While OAN admits that Rouz has written for Sputnik, the lawsuit argues that Maddow’s reporting was inaccurate because Rouz was only a freelancer for the Russian news organization, and he was allowed to chose the topics and viewpoints of the articles he wrote for Sputnik News, which were mainly about “various topics in global economics and international finance.” 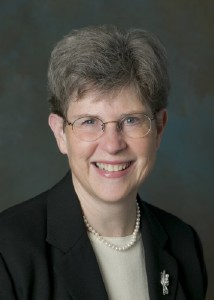 Judge Alice Batchelder
The case is Thomas v. Bright (6th Cir., Sept. 11, 2019). In an opinion by Judge Alice M. Batchelder a Sixth Circuit panel unanimously ruled that the Tennessee Billboard Act is unconstitutional. Petitioner William Thomas owned a billboard on a vacant lot and posted a sign on it supporting the 2012 U.S. Summer Olympics Team. Tennessee ordered him to remove it because the state had denied him a permit and the sign did not qualify for the exception, given that there were no activities on the lot to which the sign could possibly refer. Thomas sued, claiming that this application of the Billboard Act violated the First Amendment. The Sixth Circuit panel sustained that claim.

In analyzing the issue before the court, Judge Batchelder declared:

Textually, the Billboard Act is a blanket, content-neutral prohibition on any and all signage speech except for speech that satisfies an exception; here, the on-premises exception. In this way, Tennessee favors certain content (i.e., the excepted content) over others, so the Act, “on its face,” discriminates against that other content. See Sorrell v. IMS Health Inc., (2011). The fact that this content-based aspect is in the exception to the general restriction, rather than the restriction itself, does not save it from this analysis.

Later in her opinion, she added:

Tennessee cites language from [Reed v. Town of Gilbert] that the law in question there “depend[ed] entirely on the communicative content of the sign,” for its argument that Reed means that a law is content-based only if it “depends entirely” on the content of a message. But that language was a factual statement describing the defendant’s municipal code, not part of Reed’s analysis or holding. In any event, the Supreme Court has repeatedly held that laws combining content-based and content-neutral factors are nonetheless content-based.

There is much more in Judge Batchelder’s learned opinion that addresses a variety of Reed issues raised by the state in its defense of the Billboard Act.

→Mr. Thomas was represented by Owen Yeates and Allen Dickerson, with amicus support from Eugene Volokh and Ilya Shapiro, among others.

This from David Hudson at First Amendment Encyclopedia:

The appeals court determined that the law was a content-based restriction on speech that was not drafted with sufficient precision to satisfy First Amendment review.

The law prohibits automated telephone calls for the following purposes: 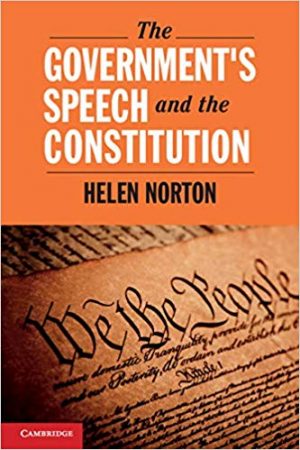 In The Government’s Speech and the Constitution, Helen Norton offers the most comprehensive, thoughtful, and insightful analysis of the constitutionality of government speech ever written. This expansive conception of government speech has been largely unexplored in our scholarly literature, and Norton unpacks these complex issues in an exceptionally original and illuminating manner.

A thoughtful, nuanced, and accessible book on a complex and important topic. Norton takes her readers on a rich and rewarding tour of the forms that government speech can take, of the often murky and contested line between government speech and private speech, and of the wide range of constitutional doctrines that shape the legal parameters of government speech.

When Paris became the capital of the High-Enlightenment around the mid-eighteenth century, the Old Regime monarchy created a Maginot Line of overlapping pre- and post-publication censorship. This system was intended to ensure that good books were encouraged and privileged while bad books that attacked the monarchy and Catholic orthodoxy or morals were kept out of circulation or suppressed.

“So to Speak”: Two New Podcasts

In this episode of So to Speak: The Free Speech Podcast, journalist Kevin Williamson joins us to discuss his new book, “The Smallest Minority: Independent Thinking in the Age of Mob Politics.” Williamson is the roving correspondent for National Review and co-host of the podcast Mad Dogs & Englishmen.

One year ago this week, “The Coddling of the American Mind: How Good Intentions and Bad Ideas Are Setting Up a Generation for Failure” was published.

On [this] episode of So to Speak: The Free Speech Podcast, we sit down with FIRE President & CEO Greg Lukianoff, who co-authored the book with Jonathan Haidt, to reflect on what’s changed — or hasn’t changed — in the intervening year.

In the News & Opinions