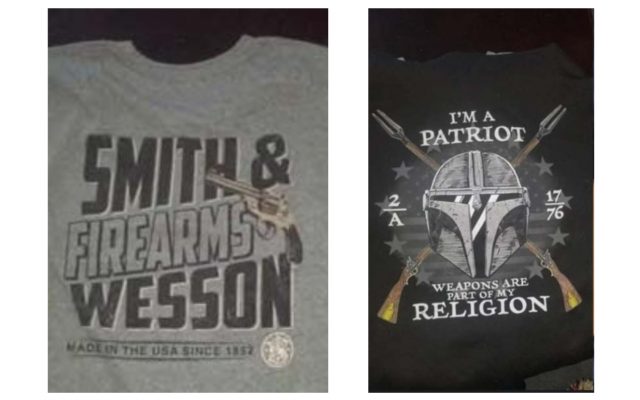 A ruling this month in Wisconsin sharply clarified that Second Amendment sentiments don’t lose First Amendment protections just because the message is on clothing. The court prevented two school principals from distorting First Amendment law to justify censoring students, so FIRE celebrates the case as another win for free speech.

In February, Wisconsin’s Shattuck Middle School Associate Principal David Sonnabend told a student that he needed to cover several items of clothing, including a T-shirt that read “Smith & Wesson Firearms – Made in the USA Since 1852” and a sweatshirt that read “I’m a Patriot – Weapons are part of my religion.” Shattuck’s dress code prohibits any clothing not deemed “appropriate.”

The students filed a lawsuit against the principal and assistant principal  — in both their official and personal capacities — arguing that the public school administrators were unlawfully restricting their First Amendment rights. Earlier this month, United States District Judge William Griesbach reminded the overzealous principals that they can’t tinker with Tinker, the landmark 1969 ruling that public school students wearing symbolic black armbands to protest the Vietnam War were protected by the First Amendment. The Supreme Court held in Tinker that in order to justify prohibiting particular expression, officials must show that the expression at issue would “materially and substantially interfere with the requirements of appropriate discipline in the operation of the school.” In other words, a black armband protesting the Vietnam War, or in this case, a pro-gun T-shirt, must do more than simply ruffle the sensibilities of administrators. (For more info on Tinker and other cases, visit FIRE’s First Amendment Library.)

In this case, the defendants admitted the students’ shirts did not materially affect the schools’ operations. Rather, they alleged that the shirts are not protected speech because they “fail to convey a particularized message,” and that two of the shirts are “merely advertisements for companies that happen to have a picture of a firearm on them.” (Spoiler: there’s no advertisement exception to the First Amendment either.)

Further, they tried to add even more asterisks to the First Amendment, arguing that in order for a T-shirt’s wording to enjoy constitutional protection its message “must be clear and unmistakable.” Judge Griesbach’s order notes that the shirts’ message must have been clear, as the school leaders understood the messages well enough that they felt the need to censor them.

The ruling did not determine whether the administrators were justified in prohibiting the shirts at the specific time and place they were worn, but it did decide that all of the items of clothing in the case are entitled to constitutional protection.

FIRE sees cases like this in higher ed all the time, like pro-marijuana groups at Iowa State University and the University of Missouri singled out for using their school’s name or mascot on their shirts, or a student defense organization at Ohio University having to team up with FIRE to sue for continued use of T-shirts featuring their decades-old slogan, “We get you off for free.” And while K-12 schools and colleges are not identical arenas when it comes to the protection of student political expression, FIRE is heartened to see this defense of students’ rights to express their opinions.

FIRE remains watchful for college students who face similar violations of their First Amendment rights. If you are censored on campus, pull the FIRE alarm.

You can read the full decision below: