FIRE’s recent groundbreaking Spotlight on Due Process report found that the overwhelming majority of our nation’s top universities fail to provide students even the most basic elements of due process. Now, to make sure students know what they’re up against if they’re accused of serious misconduct, FIRE is running eye-catching ads in campus newspapers at the worst-offending schools across the country.

FIRE bought full or half-page, full-color advertisements in eight campus newspapers running between December and February, detailing how — precisely — policies there fail to provide due process to students accused of both general misconduct and sexual misconduct. 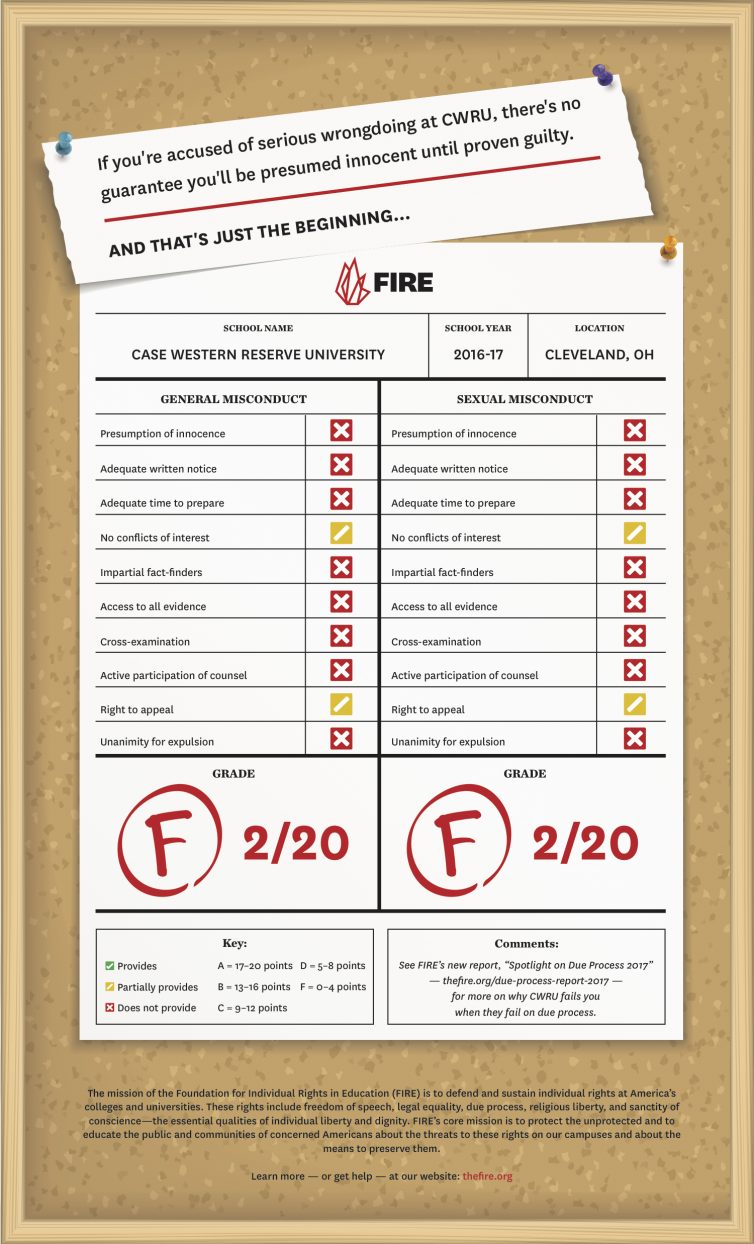 Grading institutions on a letter scale — A to F — FIRE’s report found a whopping 85 percent of campuses surveyed earned Ds and Fs when it came to ensuring accused students receive fair hearings. A staggering 74 percent don’t even expressly presume students innocent until proven guilty. Our ads (linked below) provided a report-card style rundown of exactly what students can expect in a disciplinary hearing — and explain to students that their school is failing them when it comes to due process.

The selected schools below were among those receiving the very lowest scores — at least one F apiece, for either their general misconduct policies or sexual misconduct policies. Full details about each campus’ policies and the process we used to rate each one can be read in our 2017 Spotlight on Due Process report. Here’s a list of where we ran our ads, and a few of the schools’ more egregious policies:

Boston College made our worst offenders list because it fails to expressly presume students innocent, doesn’t provide students adequate written notice of the charges against them, fails to provide adequate time for a hearing, can expel students without a unanimous decision by a fact-finding panel, and more.

Caltech does not clearly state that its students are presumed innocent until proven guilty, nor are students permitted adequate time to prepare a defense. The school also fails to prevent conflicts of interest in the hearing process, among other failings.

If accused of sexual misconduct, Caltech does not require fact-finders to be impartial, potentially compromising the integrity of the hearing.

Case Western fails to expressly provide a presumption of innocence, adequate time to prepare for a hearing, adequate notice of the charges against the accused student, the right to active assistance of counsel in a disciplinary hearing — and more.

Dartmouth doesn’t expressly provide the presumption of innocence, the right to active assistance of counsel, or an opportunity to access all the evidence in its disciplinary proceedings.

NYU students are not afforded an express presumption of innocence, proper access to evidence against them, or adequate time to prepare, and fact-finders are not required to reach a unanimous decision about an expulsion.

Penn State students are not expressly presumed innocent until proven guilty, have no guarantee that impartial fact-finders will be used, and may not be able to access the evidence against them to prepare a defense. Those are just a few of the school’s due process failings.

University of Illinois at Urbana-Champaign

University of Illinois students accused of serious wrongdoing have no guarantee they’ll be presumed innocent. Nor can they expect the right to active assistance of counsel in a disciplinary hearing or access to all the evidence in their case. They can also be expelled without an unanimous decision by fact-finders.

UW-Madison students accused of misconduct are not guaranteed an express presumption of innocence, adequate time to prepare, adequate notice of the charges against them, or impartial fact-finders. And those are just a few of the university’s due process failings.

Find our more about these schools’ problematic disciplinary policies and procedures, or see if we rated your school in our full Spotlight on Due Process report.