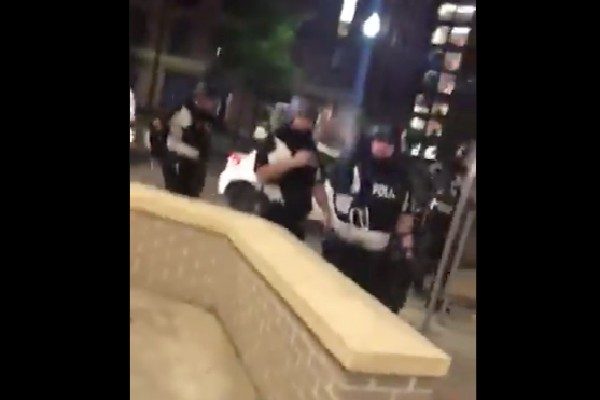 FIRE, joined by the Student Press Law Center and the College Media Association, wrote today to the Ohio State University and the Columbus Division of Police after three OSU student reporters were pepper-sprayed by police last night while lawfully covering a protest near campus.

The reporters were exercising their rights under the First Amendment’s guarantees of freedom of expression and a free press, which broadly protect the right to film and report on the activities of law enforcement. The City of Columbus’ executive order declaring a state of emergency during nationwide protests over the death of George Floyd also specifically exempts media from enforcement of the curfews.

The Lantern, OSU’s student newspaper, released video showing Columbus police in riot gear telling their reporters — who were standing on a street corner on the eastern edge of OSU’s campus after curfew — to leave the area. The video shows a group of officers forcefully moving the press members back from the area and spraying them with pepper spray, even after being informed that they were journalists and that the curfew was inapplicable to them:

Our reporters were sprayed by police after identifying themselves as “news media” repeatedly. News media are exempt from the curfew. #columbusprotest pic.twitter.com/GOzptPjZD9

In the video, one officer tells the students they are “past curfew” and need to leave. The reporters loudly and repeatedly state that they are media and are exempt from curfew.

“We’re members of the news media!” shouts one reporter.

“We’re news media,” says another. “Media are exempt from curfew!”

Student journalists are an important part of the process of informing the public of undertakings of government officials.

The officer appears to hear them but continues to state that the reporters are violating curfew. Within seconds, another group of officers comes around the corner and one begins immediately pepper spraying the students, who then retreat.

In another video posted by Lantern reporter Maeve Walsh, an officer approaches saying “Leave or you’re going to jail.”

Columbus Police began spraying protestors around 10:25 at the corner of High and Lane. @m_p_garrison @sarahszilagy and I were also sprayed despite making them aware we are members of @TheLantern. The press is exempt from the curfew. pic.twitter.com/BcyitLujyQ

The Lantern reported additional details of the confrontation:

Multiple officers forcefully pushed at least one of our reporters and proceeded to spray all three at point-blank range and continued as our reporters retreated backwards. Our reporters were holding press passes in the air and repeating they were members of the news media.

Here is a photo of @TheLantern journalists showing their press IDs to police moments before being pepper sprayed pic.twitter.com/Mvr4TLT83F

As FIRE, SPLC, and CMA wrote in our joint letter, “the right to record the police is well established.” In this case, “the police officers’ use of pepper spray to impede student journalists’ ability to cover important events on the border of Ohio State’s campus is a clear violation of those rights.”

[T]hat action not only violates the student journalists’ right to gather information, but also burdens the public’s right to know about the operations of police officers. As members of the campus and broader community, student journalists are an important part of the process of informing the public of undertakings of government officials, including both those at Ohio State and those in the broader community of Columbus. Mayor Ginther’s curfew order recognized this essential role of the press by exempting the news media, allowing reporters to continue to keep the public informed of the goings on in Columbus, even after hours. Indeed, an exemption in a curfew order for journalists to remain present is a critical bulwark against police abuse, as journalists remain the only civilians able to lawfully observe and share information about the conduct of police as they respond to protests critical of the police.

The curfew order couldn’t be clearer – media are exempt. After I saw this video late last night, my office sent an email to CPD leadership re-explaining this at 12:03a.

Additionally, this use of mace must be investigated, along with others we have already submitted. https://t.co/4qyGPELB82

“I am requesting a clear response from you on how your officers will affirm the freedom of the press 24 hours a day,” Brown wrote. “The U.S. Constitution is not subject to a curfew.”

Freedom of the press is not subject to a curfew.

Last night we saw reported use of force by police against press near OSU’s campus. Today I asked Chief Quinlan for his plan to affirm the freedom of the press 24 hours a day. pic.twitter.com/3AUJVsD1xg

OSU has received recent criticism from its student groups over its relationship with the Columbus police.

The nationwide protests, which have escalated in many major U.S. cities since Floyd’s death on May 25, have sparked widespread reports of attacks on journalists by police and protesters. The Neiman Journalism Lab, part of the Nieman Foundation for Journalism at Harvard University, reported more than 100 journalists have been attacked by police in recent days.

“[I]n the majority of the cases we have recorded the journalists are clearly identifiable as press, and it is clear that they are being deliberately targeted,” Nieman Lab wrote, citing data from the U.S. Press Freedom Tracker. The Reporters Committee for Freedom of the Press has also reported on these attacks.

FIRE and other organizations have resources for student journalists covering protests. Here are a few:

Reporters Committee for Freedom of the Press Guide: “Police, Protesters, and the Press”