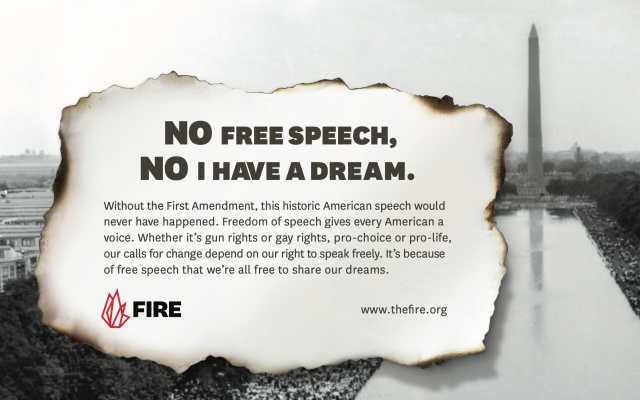 NEW YORK, Jan. 14, 2022 – In a series of arresting ads that strike at the necessity of preserving and defending free speech rights, the Foundation for Individual Rights in Education will launch its first national advertising campaign this weekend.

Breaking in Sunday’s New York Times Magazine, the initial ad invokes the Rev. Dr. Martin Luther King Jr.’s famous “I Have a Dream” speech to bring home to Americans across the political spectrum what would be lost if our nation lacked the right to free speech. The ad coincides with Monday’s national holiday honoring the civil rights leader.

Proclaiming “No Free Speech, No I Have A Dream,” the double-page ad kicks off a print and digital marketing campaign that stresses the need to be able to speak freely and respect our fellow Americans’ right to do so, regardless of their viewpoint. The ad concludes, “It’s because of free speech that we’re all free to share our dreams.”

“Across history, people have fought for the right to express themselves, speak their minds, and share their dreams for a better future,” said FIRE Vice President of Communications Nico Perrino. “Unfortunately, the importance of free speech in a free society is too often forgotten or taken for granted. The argument for this precious right needs to be made directly and unapologetically to every new generation. That’s what this campaign hopes to accomplish.”

A second ad, focused on the perils and dystopian reality of censorship, will run later this month on the back cover of the New York Times Magazine. Its headline reads: “Free Speech is Never as Dangerous as Those Who Try to Silence It.”

Subsequent ads will address the phenomenon of “cancel culture” and the noteworthy legal and advocacy cases undertaken by FIRE to protect free speech rights. The digital media component consists of a strategy dubbed “FIRE drills,” where ads will immediately appear on 100+ news and political websites, as well as on social media news feeds, if stories or posts are published that connect to FIRE’s mission of defending free speech.

The campaign aims to positively predispose audiences to further understand and engage with the cause, become familiar with FIRE’s work and its position as a nonpartisan free speech advocate, and find their way to the organization’s website where they can learn more and join FIRE’s efforts.

This marks the first time FIRE has undertaken national advertising to spread awareness of the importance of defending and sustaining the right to freedom of expression. The campaign was created by the independent advertising agency DeVito/Verdi. The New York agency has a long history of award-winning public service and cause-related advertising for clients, including the post-9/11 “Campaign for Freedom”, the ACLU, and the Defense Department (“Support the Troops”).

“FIRE is taking the lead in this country to combat the chilling effect of silencing speech,” said DeVito/Verdi President Ellis Verdi. “This campaign shows that our calls for change depend on anyone and everyone’s right to speak freely.”