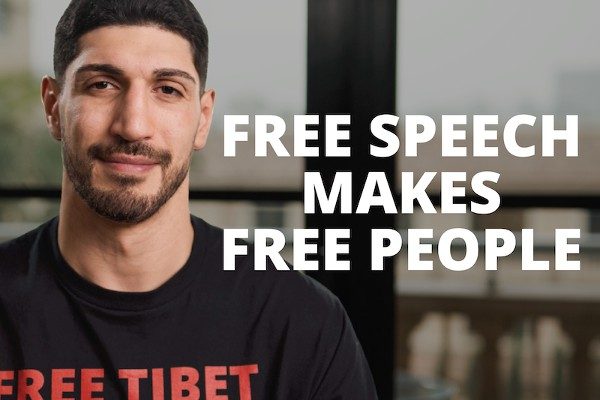 WASHINGTON, D.C. Feb. 7, 2022 – NBA star Enes Kanter Freedom knows the cost of censorship. When he started speaking out against the government of his native Turkey, Turkish officials put his dad in jail, revoked his passport, and forced his family to disown him.

In a captivating new advertising campaign from the Foundation for Individual Rights in Education, set to air during the Olympic Games, Kanter Freedom shares his story and highlights the importance of freedom of speech.

“I remember the first time coming to America,” said Kanter Freedom, who recently became a United States citizen and plays center for the Boston Celtics. “One of my teammates criticized the president and I said, ‘Dude, what are you doing? They might put you in jail.’ And he said, ‘This is America.’ And he explained to me what freedom of speech means. … Unfortunately if you use your free speech in Turkey, you’ll end up in jail.”

FIRE’s advertising campaign launches today to coincide with the Beijing Winter Olympic Games and the conversation surrounding the human rights record of the Chinese government. Ads will run on primetime throughout the Olympics, as well as on network and cable news shows, including “Meet the Press,” “Tucker Carlson Tonight,” “Fareed Zakaria GPS,” and more.

“Freedom begins with the freedom to speak,” said FIRE Vice President of Communications Nico Perrino. “Authoritarians across the globe use censorship to stay in power and conceal their abuses. We need a culture supportive of free speech to stop them. That’s why Enes’ message that change can only happen with freedom of speech is so powerful.”

The advertising campaign is an exciting new addition to FIRE’s larger public education campaign in support of free speech values. In addition to its advertising and marketing campaigns, FIRE produces award-winning documentaries, hosts podcasts, creates curricula, maintains a First Amendment library, writes bestselling books, conducts social science research, publishes a popular First Amendment newsletter, directs compelling and viral TikTok and YouTube videos, and much more — all in an effort to educate the American public about the importance of free expression.

“It is so important to have organizations like FIRE,” said Kanter Freedom in the ad. “They are protecting the First Amendment and freedom of speech.”