In this post, FIRE staffers Marieke Tuthill Beck-Coon and Azhar Majeed offer their thoughts regarding a series of tweets sent by Vice News Tonight correspondent and New York Times Magazine writer-at-large Jay Caspian Kang, in which he weighs in on campus free speech issues. 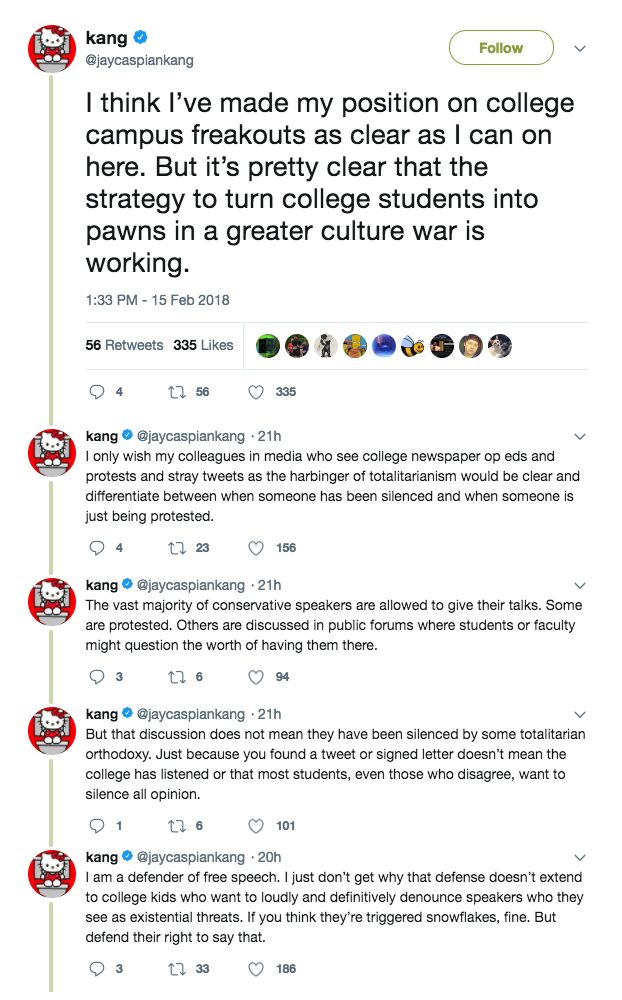 Marieke: This string of tweets from Jay Caspian Kang was inspired by media commentators reacting to a letter published and signed by 18 students at Brown University in protest of a February 13 campus event featuring Fox News contributor Guy Benson. The event, which was hosted by the College Republicans, went forward and was a success by Benson’s own report, for what it’s worth.

Kang makes important points about the frequent conflation of “censorship” and protest that comes across in much of the commentary on campus speech issues. There’s a great deal of difference between a controversial speaker actually being prevented from speaking and being protested when it comes to the civil liberties discussion, so it’s worth being clear with one’s definitions. Censorship occurs when university authorities use their power to decide that speech may not take place, and so decide the permissible bounds of conversation for the community. Students questioning whether a speaker’s message is consistent with the community’s values, expressing that a message is painful, offensive, or degrading to members of the community, or calling for resistance to a message or speaker: none of these constitute censorship.

Azhar: I think Kang is right that there’s a good bit of conflation of censorship and protest that goes on in the media and in commentary. Now, in addition to the ability that university authorities have to censor speakers, students do possess the ability to do so when they actually disrupt an event, use violent tactics, or otherwise behave in ways that are not protected by (or compatible with) the First Amendment. However, that’s not the same thing as protesting an invited speaker’s, or a fellow student’s, viewpoints. For a useful example of a college policy that delineates the key differences on this point, see Brown University’s “Protest and Demonstration Guidelines.” This policy makes clear that “[p]rotest is a necessary and acceptable means of expression within the Brown community,” but that “[h]alting a lecture, debate, or any public forum is an unacceptable form of protest.”

Students have every right to denounce speakers. Whether they are calling for the speaker not to come to campus, calling on the college to denounce the speaker’s views, or denouncing the views themselves, they have a right to do so. Students sometimes also ask that their college censor their peers. While FIRE would in most instances disagree with such tactics because they are incompatible with free speech principles, we would nonetheless defend the right of students to engage in such speech, insofar as it’s protected by the First Amendment.

Marieke: I agree and disagree with Kang on this one. No, the Constitution certainly doesn’t protect you from being called out for your ideas. And it doesn’t protect you from being heckled, at least in a manner that doesn’t prevent you from moving forward with your talk. But a student group that invites someone to speak in a campus auditorium has the right to use that space for the event they want to have. The university would have the same right to use the space if it invited a speaker. The speaker would have the same right if he or she rented out an auditorium that was available to the public for booking. You can be removed for disrupting someone else’s event and preventing it from going forward. That act of disruption may have its own expressive message, but the underlying conduct can still be punishable. That’s civil disobedience: unlawful or unauthorized conduct undertaken intentionally as a form of delivering a message.

Azhar: On this point, I am reminded of Supreme Court Justice Thurgood Marshall’s eloquent words: “The freedom to speak and the freedom to hear are inseparable; they are two sides of the same coin.” Kleindienst v. Mandel, 408 U.S. 753, 775 (1972) (Marshall, J., dissenting). Elsewhere, the Supreme Court has declared that the “right to receive information and ideas, regardless of their social worth, is fundamental to our free society.” Stanley v. Georgia, 394 U.S. 557, 564 (1969) (citation omitted). Thus, interrupting a speaker is not just an affront to his or her ability to speak; it also deprives students of their event, as they have conceptualized it, and prevents other audience members from listening, learning, and disagreeing. Indeed, it is an arrogant act to assume that mantle and decide for everyone else what will be discussed, and on what terms. 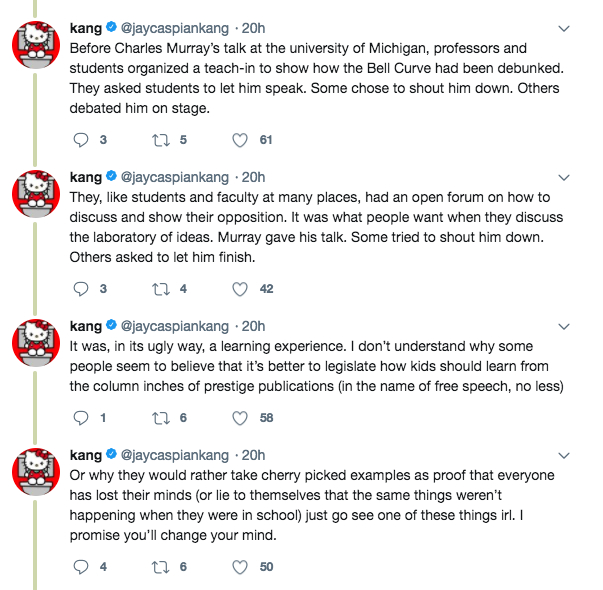 Azhar: I think it’s great when students want to have their own forum to discuss the views of the speaker in question and their areas of disagreement. Whether that’s a teach-in, a counter-event, or some other type of forum, some students may find it more comfortable (and productive) to have the discussion in this format, rather than directly protest the speaker. Of course, others may feel that they can best get their message across through protest and direct engagement. That’s fine too. (As to Kang’s observation that “[s]ome chose to shut him down,” that type of behavior is, of course, outside the bounds of protected speech and activity under the First Amendment.)

Regarding Kang’s point about cherry-picked examples, FIRE finds that our own case work defending students and faculty members sometimes falls prey to inconsistent coverage among campus commentators and media. Cases that we believe to be egregious violations of a student’s or professor’s rights will sometimes go relatively unnoticed despite our public advocacy against the school, while other cases may receive what could be considered a disproportionate amount of coverage and outcry. Whether that’s due to selective coverage, cases not fitting a certain narrative, or something else, it is a phenomenon we have long noticed.

Marieke: Good point about our case work, Azhar. There’s always a ton of coverage of controversial speakers on campus, but things like our art censorship cases get very little attention even though they’re incredibly important and politically charged.

Going back to the top of these tweets, I love that Kang brought up “The Bell Curve” because it gives me an excuse to parrot one of my favorite quotes from Erwin Chemerinsky and Howard Gillman’s recent book, “Free Speech on Campus”: “History demonstrates that there is no way to define an unacceptable, punishment-worthy idea without putting genuinely important new thinking and social critique at risk.” Chemerinsky and Gillman cited the resounding debunking of “The Bell Curve” by academics as an example of the power and value of social critique. I think Kang does well to remind us that students are considering and choosing between different methods of social critique when figuring out how to react to controversial speakers and ideas on campus.

He also reminds us that the rest of us non-students sitting around commenting on students’ protest choices is armchair quarterbacking. There can be value in public feedback, as the efficacy of tactics and methods of social critique in achieving intended goals is debated on and off campus. And off-campus movements — Black Lives Matter, for example — certainly help shape on-campus movements. I think that’s part of learning, growing, and changing. But finger-wagging is rarely helpful to anyone. More concerning still, finger-wagging often goes along with “knowing what’s better,” which has too frequently led to attempts to literally legislate how students may protest.

Azhar: I also take Kang’s point about the experience being a learning process for students. We should always keep in mind that these are 18- to 22-year-olds, many of whom are confronting such controversy for the first time in their lives, all while moving away from home and balancing their studies and other activities. Some of them will make mistakes, and some of them will even learn from them and realize what they did wrong.

As to literally legislating how students protest, a number of state legislatures have tried to do exactly that, and the results have been a mixed bag. As FIRE has remarked with respect to legislation in several states, bills that mandate a particular institutional response and punishment for students engaging in disruptive conduct are problematic. For one, it’s not easy to define what disrupts or prevents another person from speaking in every instance, and bill provisions that hinge on that definition are inherently rigid and broad. Secondly, mandatory minimum punishment requirements tend to be unfairly inflexible, leading to disproportionate punishments regardless of one’s culpability and severity of conduct. One has to remember that these sanctions can have life-changing consequences for young people.

Marieke: My final thought too: More often than not nowadays, when I see controversy in the headlines over someone’s right to free speech on campus, I cringe because the right to say something shouldn’t be a headline. The headline should be about what a person said. The more we talk about whether someone is or should be allowed to say something, the less we talk about the content of the speech. It’s a great way to distract from the substance of a discussion. It’s also a great way for provocateurs to get famous and sell books. The answer to someone proclaiming, “I can say X because I have free speech!” (remember the “Free Speech Bus”?) should be, “Great, have a cookie for demonstrating you can talk. Now tell me why you said it.”

Azhar: My final thought is that there should be, and needs to be, much more nuance in how media commentators present current campus free speech issues. Some may prefer to put a partisan spin on things, and some may prefer to push their chosen narrative, but if we are to be accurate and honest about what is actually happening on campus, let’s make sure we are using the correct definitional lines. The result would hopefully be a more productive and useful conversation about these issues.