FIRE > Newsdesk > FIRE-supported Documentary ‘Can We Take a Joke?’ Acquired by Samuel Goldwyn, Set for Release this Summer

Can We Take a Joke?, the FIRE-supported documentary featuring free speech experts and comedy heavyweights like Gilbert Gottfried, Penn Jillette, and Adam Carolla talking about the collision of comedy and outrage culture, has been acquired by Samuel Goldwyn Films.

No joke, we’re releasing @CanWeTakeaJoke by @tedbalaker this summer. Read more about this #docu via @Variety https://t.co/cWmAVGU3C4

News of the film’s acquisition and summer release date spread to Hollywood’s trade publications late last week and was quickly picked up by outlets like Vanity Fair.

“Outrage culture” doc ‘Can We Take A Joke?’ to infuriate just about everybody this summer https://t.co/JINlRStfwI pic.twitter.com/fl6cMQDsDg — VANITY FAIR (@VanityFair) April 2, 2016

A few outlets opted to report on a movie about jokes by working in a few one-liners of their own.

“We at Samuel Goldwyn Films are outraged that the outrage has gotten this far,” said a probably not entirely outraged Peter Goldwyn, President of Samuel Goldwyn Films, “and are thrilled to work with Ted Balaker on his eye-opening and profound film on how free speech is under siege, not just in the comedic world but in all facets of life.”

Jokes aside, news of the film’s acquisition was roundly welcomed by publications, who touted its message as an important one.

Maxim noted that “[n]owhere has the debate over political correctness been more relevant than in the world of comedy,” with top comedians like Chris Rock and Jerry Seinfeld foregoing the college circuit altogether in recent years for fear of retribution. “It’s a fraught issue that is becoming increasingly tricky to talk about.”

Samuel Goldwyn, in announcing the acquisition Friday, called the documentary “a thought-provoking and wry exploration of outrage culture through the lens of stand-up comedy detailing its stifling impact on comedy and free speech.”

Moviegoers can expect a limited theatrical release late this summer, with a wider digital release to follow. 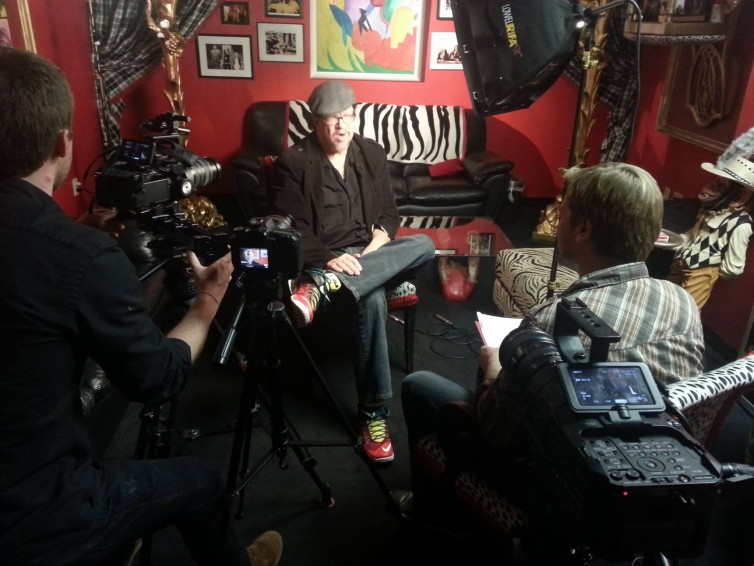 Can We Take a Joke? crew interviews Penn Jillette.

FIRE President and CEO Greg Lukianoff is one of the film’s executive producers.

“I am absolutely thrilled about Samuel Goldwyn Films purchasing the rights to the documentary,” Greg said. “I think everyone could use a reminder that you can either have a right to not be offended, or you can have good comedy, but you can’t have both. I hope every living person in this universe (and every other) goes to see it.”

Ted Balaker, the film’s director, noted that the film’s release comes at a meaningful time for fans of one of the greatest—and most outrageous—modern day comedians. “The timing is a bit surreal,” Balaker said, “because it is the 50th anniversary of the death of Lenny Bruce, the godfather of stand-up comedy and hero of our film; in our age of instant outrage and kneejerk censorship, we need Lenny’s influence now more than ever.”

But you don’t have to wait until summer to see Can We Take a Joke? —the film will be screened tonight at the Sarasota Film Festival in Florida and at the RiverRun International Film Festival in North Carolina later this month.

Philadelphia’s National Constitution Center will also hold an advance screening celebrating “Freedom Day” on Wednesday, April 13, 2016. (If you are interested in attending the screening, email Haley Hudler at haley@thefire.org for more information.) Yale University, Temple University, Brown University, and Brooklyn Law School will livestream the event, and Young Americans for Liberty will sponsor advance “Freedom Day” screenings at more than 300 campuses across the country.

And there’s still time for college students to apply for free exclusive screening rights to show the documentary on their campus between April 13 and April 20! But the deadline to apply is fast approaching.